The document Gymnosperms & Angiosperms Notes - NEET is a part of NEET category.
All you need of NEET at this link: NEET

1. Term Gymnosperm was given by Theophrastus.

7. Most of the gymnosperms are arborescent (woody and tree habit) - but some are present as shrub. eg. Ephedra Some Gymnosperm are liana or woody climbers. eg. Gnetumula

1. In Gymnosperms main plant body is sporophyte (diploid). All Gymnosperm are dioecious. i.e. male & female plants are separate, but exceptionally Pinus is monoecious.

2. All Gymnosperms are heterosporus. At the time of reproduction two types of spores are formed.

3. These two types of spores are formed in different sporangia.

4. Both types of sporangia are formed on different sporophylls.

10. Female gametophyte is formed after germination of megaspore.

(1) Zoodio - siphonogamy & This type of fertilization occurs in lower gymnosperms. Male gametes are motile and transferred to female gamate by pollen tube. 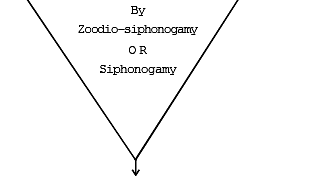 1. Embryo is formed by the development of diploid zygote. After embryo formation ovule is termed as seed. (Seed = Ovule + Embryo)

Note :- Different types of polyembryony are found in gymnosperm i.e. a single seed develops many embryo.

Life cycle of Gymnosperm & angiosperm is diplontic because gametophytic generation is short lived. Gametophyte is very reduced & depends on its sporophyte.

(E) Stem is caudex and wood is mannoxylic.

Cycadophyta is divided into three orders:

(a) This group includes seed ferns. Many characters of ferns are found in this group like megaphyllous leaves, circinate vernation, ramenta, motile gametes, hadrocentric vascular bundles.

(a) It is also a completely extinct group. eg. Williamsonia - fossil plant

Note : Its fossils were discovered by Prof. Birbal sahani

(a) Presently living cycadophytes are included in this order.

(b) All the plants of this group are living fossils.

(a) It is the oldest order of coniferophyta. Maximum plants of this group are extinct.

(b) Only one plant of Ginkgo biloba is present in India (In Manali). Some plants are also present in China.Ginkgo biloba -living fossil - It is also known as "Maiden hair tree".

Note : Exceptionally Ginkgo biloba belongs to higher gymnosperm but its male gametes are motile and fertilization by zoodiosiophonogamy.

(ii) Cordaitales :-(a) It is completely extinct group eg. Cordaites

(a) Conifers are included in this group.

(b) It is the largest group of gymnosperm e.g. of Coniferales :-

(c) Taxus – It is known as Yew tree. An anticancer medicine "Taxol" is obtained from its bark.

(d) Taxodium maxicanus – The stem of this plant is thickest in the plant kingdom.

(e) Abies balsamea – A resin "Canada balsam" is obtained from it. It is used to manufacture permanent slides in biology laboratory.

(f) Juniperus virginiana – An oil is obtained from this tree - "Cedar wood oil". It is used as cleansing fluid in biology laboratory. This oil is also used in microscope to increase  the resolving power. This oil is used as nail polish remover.

(h) Sequoia species – The plants in this genus are heavy. Therefore they are called as father of forest.Sequoia giganteum – It is called Redwood tree or Sherman tree. It is the largest gymnosperm. There is only one tree of this species and that is in California (America)

(i) Metasequoia – It is a living fossil. This plant is present in china valley.

(a) They are the most advanced gymnosperms.

(b) Exceptionally members of this group have vessels in xylem.

(c) Ovule of this group is bitegmic.

(d) Archegonia is absent in the members of this group. eg.

Ephedra- This gymnosperm is commonly found in Rajasthan. Ephedra is a medicinal plant. Ephedrine (Medicine) is obtained from it. It is an effective medicine in asthma. Athletes misuse it, so ephedrine is restricted for them.

The document Gymnosperms & Angiosperms Notes - NEET is a part of NEET category.
All you need of NEET at this link: NEET