The document Heat, Work and Internal Energy Class 11 Notes | EduRev is a part of the Class 11 Course Chemistry for JEE.
All you need of Class 11 at this link: Class 11

HEAT AND WORKHeat & work both are forms of energy. Both are boundary phenomena and take place at the interface of the system & surroundings.WORK

SIGN CONVENTION OF WORK DONE
Work done on the system, w = + veWork done by the system, w = -veExpansion: W ⇒ - veCompression: W ⇒ +veCHANGE IN INTERNAL ENERGY BY DOING WORK
We take a system containing some quantity of water in a thermos flask or in an insulated beaker.The manner in which the state of such a system may be changed will be called adiabatic process. 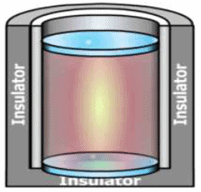 Let us call the initial state of the system as state 1 and its temperature as T1 . Let the internal energy of the system in state 1 be called U1.

We can change the state of the system by two different methods.(i) First Method: By doing some mechanical work, say 1 kJ, by rotating a set of small paddles and thereby churning water. Let the new state be called 2 state and its temperature, as T2. It is found that T2 > T1 and the change in temperature, ∆T = T2 – T1. Let the internal energy of the system in state 2 be U2 and the change in internal energy, ∆U =U2 – U1.

(ii) Second Method: We now do an equal amount (i.e., 1kJ) electrical work with the help of an immersion rod and note down the temperature change. The internal energy U, whose value is characteristic of the state of a system, whereby the adiabatic work, wad required to bring about a change of state is equal to the difference between the value of U in one state and that in another state, ∆U i.e.,∆U =U2 −U1
Therefore, internal energy, U, of the system is a state function.CHANGE IN INTERNAL ENERGY BY TRANSFER OF HEATThe energy that flows across the boundary of a system during a change in its state of difference in temperature between system and surroundings and flows from higher to lower temperature. 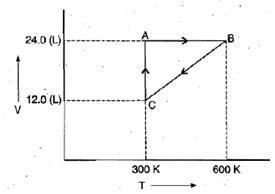