Mating between two or more individuals or lines, which are different in genotype.

Hybridization is the most common method for creation of genetic variations. It is performed very often to combine character from two different plants.

Hybridization is divided in following categories.

(i)   Intravarietal hybridization : The crosses between the plant of same variety.

(ii)  Intervarietal hybridization : The crosses are made between the plant belonging to two different varieties of same species (also known as intraspecific hybridization).

(iii) Interspecific hybridization : The plants or two different species belonging to the same genus are crossed together

(iv) Intergeneric hybridization : The crosses are made between the plant belonging to two different genera. e.g. Triticale, Raphanobrassica are the example of intergeneric cross. 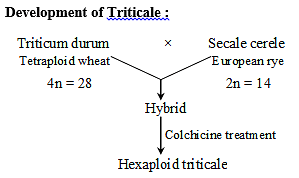 The main steps of hybridization are following-

(a)  Selection of parents

(b)  Selfing of parents to induce homozygosity

(d)  Bagging :- Female flowers are covered with bags, so that no undesirable pollen may fall on stigma

Two main aspects of hybridization are :-

(i)   To combine characters of two plants in to one

Inbreeding :- When two individuals of a species, which have common ancestry are mated together. Most extreme form of inbreeding is self pollination.

Inbreeding depression :- Loss of vigour due to inbreeding.

is ­ in homozygosity and many recessive harmful alleles also become homozygous. Thus productivity is

In self pollinated crops alleles, become rapidly homozygous & then harmful alleles are removed by selection. So here inbreeding depression does not occurs.

Mutation – Sudden and inheritable change in genetic material of an organism.

Mutagens – The agents, which are used to induced mutation.

Induced mutation – Mutation which are induced artificially with the help of mutagens.

Use of induced mutations in plant breeding to develop improved varieties. Induced mutations are useful in specific situations, when the desired alleles are absent in the germplasm.

In wheat : Sharbati Sonora and pusa lerma are two important varieties of wheat produced by gamma rays treatment of sonora-64 and Lerma roja.

Sharbati-sonora is amber grain coloured variety of wheat produced by Dr. M.S. Swaminathan and is responsible for green revolution in India.

In rice : Remei & Atomita-2 are developed through mutation breeding.

In Castor : World famous variety Aruna has been produced , in which life span has been reduced from 270 days to 102 days and also having high oil content and disease resistance.

In mung bean, resistance to yellow mosaic virus and powdery mildew were induced by mutations.

Mutation breeding has some important limitations as :

(i)   Most of the mutations are recessive

(iii) Most of the induced mutation are useless to the breeders and many of them are lethal.

(iv) Stability of mutant is sometimes doubtful, as some mutants have tendency to revert back to original type.

A crop product should provide the optimum nutrition to human and does not contain any anti-nutritional factor.

Three varieties of maize have been developed in India which are lysine-rich. Shakti, Rattan, Protina.

Breeding crops with higher levels of vitamins and minerals or higher proteins and healthier fats is known as biofortification. Breeding for improved nutritional quality is undertaken with the objective of improving.

Maize hybrid with twice the amount of amino acid, lysine and tryptophan was developed in 2000. High protein content variety Atlas 66 has been used as a donor for improving cultivated wheat. It has been possible to develop an iron fortified variety containing over five times as much iron as in commonly consumed varieties.

Methods of breeding for disease resistance : Breeding is carried out by conventional hybridization method and by mutation breeding.

Conventional breeding is often constrained by the availability of limited number of disease resistance genes that are present and identified in various crop varieties or wild relatives. Thus mutation breeding technique is used.

Another major cause for large scale destruction of crop plant and crop produce is insect and pest infestation.

Insect resistance in most crop plants may be due to morphological, biochemical or physiological characteristics.

Hairy leaves in several plants are associated with resistance to insect pests, e.g, resistance to jassids in cotton and cereal leaf beetle in wheat.

In wheat, solid stems lead to non-preference by the stem sawfly and smooth leaved and nectar-less cotton varieties do not attract bollworms.

This is the most primitive method for crop improvement.

This is practiced in crop improvement and it is selection of pheno typically superior plants from a mixed population. This step yields plants that are superior to both of the parents.

Selection acts on genetic variation, present in a population and produces a new population with improved characters. Selection is of three types-

Pure line selection is a method of crop improvement in self pollinated crops (wheat).

In this method phenotypically superior plants are selected, these are harvested separately and their produce is maintained separately.

The seeds so obtained from different plants are shown separately and selection is made for 4 to 5 generation till the desired improvement is achieved. About 10 years time is needed to develop a new variety by this method.

(1)  Only applicable for vegetatively propagated crops.

Single Cell Protein : Conventional agricultural production of cereals, pulses, vegetables, fruits, etc., may not be able to meet the demand of food at the rate at which human and animal population is increasing. The shift from grain to meat diets also creates more demand for cereals as it takes 3-10 Kg of grain to produce 1 Kg of meat by animal farming. Can you explain this statement in the light of your knowledge of food chains? More than 25 per cent of human population is suffering from hunger and malnutrition. One of the alternate sources of proteins for animal and human nutrition is Single Cell Protein (SCP).

Microbes are being grown on an industrial scale as source of good protein. Microbes like Spirulina can be grown easily on materials like waste water from potato processing plants (containing starch), straw, molasses, animal manure and even sewage, to produce large quantities and can serve as food rich in protein, minerals, fats, carbohydrate and vitamins. Incidentally such utilization also reduces environmental pollution.

It has been calculated that a 250 Kg cow produces 200 g of protein per day. In the same period, 250g of a micro-organism like Methylophilus methylotrophus, because of its high rate of biomass production and growth, can be expected to produce 25 tonnes of protein. The fact that mushrooms are eaten by many people and large scale mushroom culture is a growing industry makes it believable that microbes too would become acceptable as food.

The document Hybridization Notes - NEET is a part of NEET category.
All you need of NEET at this link: NEET