S.P.L. Sorenson, a Danish Chemist in 1909 introduced the concept of measuring the concentration of hydrogen ions (H+(aq)) in a particular solution. The p in pH stands for 'potenz' in German, meaning power. On the pH scale we can measure pH from "0" (very acidic) to 14 (very alkaline).

A universal indicator has a pH range from 0 to 14 that indicates the acidity or alkalinity of a solution.

A neutral solution has pH=7 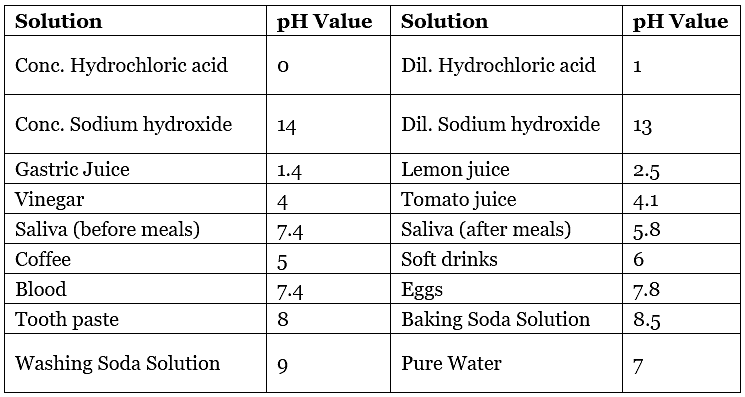 Importance of pH in Everyday Life

Are Plants and Animals pH Sensitive?

The pH plays an important role in the survival of animals, including human being. Our body works well with in a narrow pH range of 7.0 to 7.8. The aquatic animals (Fish) can survive in river water with in a narrow range of pH change.Example: When the pH of rain water is about 5.6, it is called acid rain. Too much acid rain can lower the pH of river water to such an extent and make it so acidic that the survival of aquatic animals becomes difficult or kill the aquatic animals.

Treatment of Acidic or Basic Soil: The pH of acidic soil can reach as low as 4 and that of the basic soil can go up to 8.3. Chemicals can be added to soil to adjust its pH and make it suitable for growing plants. If the soil is too acidic, then it is treated with materials like quicklime (calcium oxide) or slaked lime (Calcium hydroxide) or chalk (Calcium carbonate). All these materials are bases and hence react with the excess acid present in soil and reduce its acidity. If the soil is too basic (or too alkaline) then its alkalinity can be reduced by adding decaying organic matter (manure or compost).

pH in our Digestive System

As we know our stomach produces gastric juice which contains large amount of hydrochloric acid (pH about 1.4). The acid so produced does not harm the stomach walls, but kills germs and bacteria which enter in our digestive system along with food, thus in a way it protects us from diseases and helps in digestion. Sometimes excess of acid is produced in the stomach due to overeating or eating spicy foods. This stage is called acidity. To get relief from this pain, we take tablets known as antacids. These contain bases to neutralise the excess acids.Example: Magnesium hydroxide (milk of magnesia).Mg(OH)2

pH Change as the cause of Tooth Decay

Self-defence by Animals and Plants through Chemical Warfare

The sting of the honey bee contains formic acid, this acid causes a lot of irritation and pain. The pain can be reduced by applying baking soda paste on the affected region as the acid gets neutralised.In plant kingdom nettle (Bichu Booti) is a herbaceous plant which grows in wild. The nettle leaves have stinging hair. When a person happens to touch the leaves of a nettle plant accidently, the stining hair of nettle leaves inject methanoic acid (HCOOH) into the skin of the person causing burning pain. The nettle sting, being acidic can be neutralised by rubbing baking soda on the skin. Nature provides remedy for the nettle sting in the form of a 'dock' plant, which often grows besides the nettle plants. The leaves of dock plant contain some basic chemicals which neutralises methanoic acid.

A substance formed by the partial or complete replacement of H+(aq) ions of an acid by a metal or electropositive ion, is called a salt.Example:

(Partial replacement: only one hydrogen atom is replaced)

(Complete replacement: Both the hydrogen atom are replaced)Example:

The salts may be classified in the following ways:1. Normal Salts: These salts are formed as a result of reaction between strong acid and strong base.Examples:

Some Normal Salts with their Parent Acids

2. Acidic Salts: The salts which are obtained by the partial replacement of ionisable hydrogen atoms of a polybasic acid by a metal or an ammonium ion are called Acid Salts.

3. Basic Salts: The salt which are formed by partial replacement of hydroxyl (-OH) groups of a polyacidic base by an acid radial are called basic salts.

Salts having the same cation or anion belong to the same family. For example, NaCl, KCl, LiCl.

A salt of a strong acid and a strong base will be neutral in nature. pH = 7 (approx.).

A salt of a weak acid and a strong base will be basic in nature. pH > 7.

A salt of a strong acid and a weak base will be acidic in nature. pH < 7.

The pH of a salt of a weak acid and a weak base is determined by conducting a pH test.

(i) By direct combination of elements: By heating two elements together

(iv) By the process of neutralization:

(v) By the action of alkalis on metal:

(i) By direct combination of elements:When metal powder is heated with sulphur, we get corresponding metal sulphides which are insoluble salts.

We know that hydrochloric acid and sodium hydroxide combine with each other to form sodium chloride (NaCl) which in common language is also known as common salt. This is the salt that you sprinkle on your salads and use in your kitchens. Common salt is an ionic compound of sodium and chlorine (Na+Cl-)n.

Chemicals from Common SaltCommon salt is a raw material for chemicals and play an important role for making various materials of daily use. Such as sodium hydroxide, baking soda, washing soda, bleaching powder and many more.Sodium hydroxide: Commercially, sodium hydroxide is also called caustic soda because of its corrosive action on animal and vegetable tissues.

Chlor-alkali Process for obtaining Sodium Hydroxide When we pass electricity through a solution of sodium chloride, commonly called brine. It decomposes to form sodium hydroxide according to the following equation: 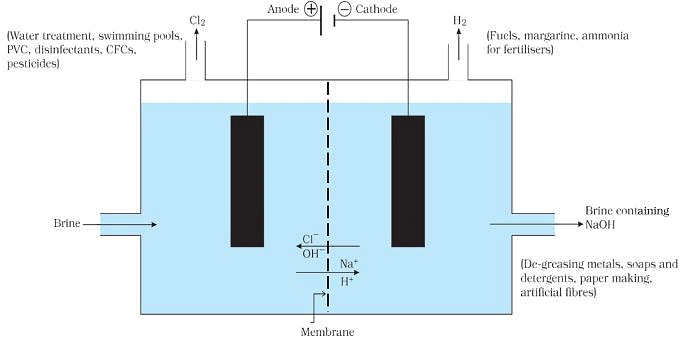