The document Indus Valley Civilisation Part - 2 UPSC Notes | EduRev is a part of UPSC category.
All you need of UPSC at this link: UPSC

INDUS VALLEY CIVILISATIONThe Indus Valley Civilisation unquestionably ranks as one of the greatest civilization of the world. The civilization was essentially urban. Some Special Features Common To All CitiesWhether it is Harappa or Mohenjo-daro, Kalibangan or Lothal, the most striking character is systematic town planning; the streets oriented north-south and east-west, produced a grid pattern.Know the Important Facts

Flanking the streets and similarly oriented lanes and bylanes were well-planned houses. The buildings, considerably varying in size, appear to have been plain but dignified. Stone not being easily obtainable, walls were raised of burnt brick, laid in mud or in both mud and gypsum mortar. Crude or sun-dried bricks were reserved for foundations and terraces, where the elements could not do much damage. Both rooms and circular brickwalls were important features of most houses.The system of drainage, public or private was remarkable. Each city had a fortified citadel possibly used for both religious and governmental purposes.

Dust-bins and rubbish chutes indicate the extreme care taken in matters of conservancy. The commodious houses, knit into a system of rigid town-planning, the public-buildings, large granaries and the citadel, all combine to present the picture of prosperous people, controlled by a firm yet beneficent authority.MOHENJO-DARO Political Condition Of  The Period 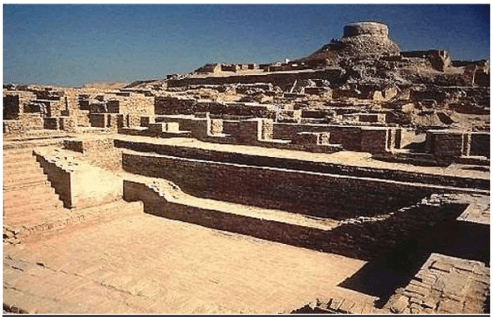 Social Condition of the Period The remains unearthed at Mohenjodaro demonstrate the existence of different sections of the people who may be grouped into four main classes i.e. priests, warriors, traders and the manual labourers like peasants.
The society was not divided into caste but into different classes. Copper and bronze seem to have superseded stone as material for household implements and utensils. Mostly, however, they were earthenware.
A large number of such bowls, dishes, cups, saucers, vases, and stone-jars of different forms have been discovered.

DIETARY
Beside rice, wheat, barley, the people used pork, beaf, mutton, poultry, fish, and the flesh of other water animal.
Perhaps milk and vegetables were also included in the dietary. 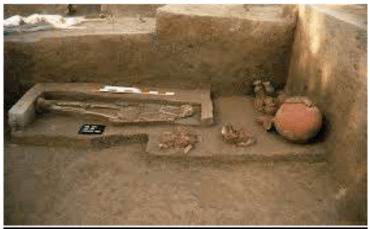 Probably there were three methods of disposing the dead:
(a) Complete burial.
(b) Burial after exposure of the body to birds and beasts.
(c) Cremation followed by burial of the ashes.
The discovery of cinerary urns and jars, goblets or vessel with ashes, bone, and charcoal may, however, suggest that during the flourishing period of the Indus valley culture the third method was generally in vogue.
At Harappa, a cemetery has been brought in light in the plain level ground near the mounds.
The remains of the dead at Harappa are associated with a distinct type of pottery decorated with vegetable patterns and peculiar animal designs. From the inscriptions on the seals, pottery and other objects, it is clear that the Indus people knew reading and writing, while the use of weights (in a binary system) and measures proved that they know arithmetic as well.
The script has not been deciphered so far, but overlaps of letters on some of the potsherds from Kalibangan show that writing was boustrophendon or from right to left and from left to right in alternative lines.
The Indus script uses pictures of animate and inanimate objects along with linear signs resembling roman characters.
There are 62 basic signs in the Indus script. Indus valley script computer analysis started in 1964 in USSR and in India in 1972 by Tata Institute of Fundamental Research. The economy of the Indus Valley Civilisation was based on the irrigated agriculture which must have developed and promoted the productive forces. There is evidence of the cultivation of wheat, barely, peas, sesamum, mustard, cotton and rice.
It is uncertain whether the plough had replaced the hoe, or the latter was still in use.
The list of cultivated plants gathered by archaeologists from remains found at Mohenjodaro bears witness to the practice of flood-plain agriculture and strongly suggests that the farmers of Mohenjodaro grew only a winter or rabi crop.