The document Indus Valley Civilisation UPSC Notes | EduRev is a part of the UPSC Course History(Prelims) by UPSC Toppers.
All you need of UPSC at this link: UPSC 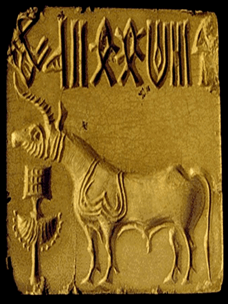 In 1924, scholars in history were roused by the announcement of Sir John Marshall that his Indian aides, particularly R.D.Banerjee , discovered (1922-23) at Mohenjo-daro in the Larkana district of Sind, now in Pakistan, the remains of a civilisation, one of the oldest of the world. A few hundred miles towards the north of Mohenjo-daro, four or five superimposed cities were excavated at Harappa in the Montgomery district of the Punjab, now in Pakistan. That the civilisation was not confined to the limits of the Indus Valley can be understood from the finds of relics of the same civilisation at the Sutkagendor on the sea board of the south Baluchistan, in the west of Alamgirpur in the Uttar Pradesh in the east.

Until the discovery of the remains of the Indus Civilisation, it was believed by scholars that the history of India practically began with the coming of the Aryans. But this theory is an exploded one and the pre-historic civilisation of India, that is, the Indus Valley Civilisation.

The Harappan culture was the most extensive of the ancient civilisation in area(geographical extent), including not only the Indus plain (the Punjab and Sind), but also northern Rajasthan and the region of the Kathiawar in western India. It was essentially a city culture and among the the centers of authority were the two cities of Mohenjo-daro and Harappa. The 1400 settlements, discovered so far are distributed over a very wide geographical area. Its known extent in the west is upto Sutkagendor in Baluchistan; Alamgirpur in Merrut district (Uttar Pradesh) in east; and Manda (Akhnoor district, Jammu and Kashmir) in north, covering an area of almost 1600 km, east-west and 1400 km in north south. The total geographical area over which this civilization flourished is more than 20 times of the area of Egytian and more than 12 times of the area of about 12,50,000 sq.km. Harappan settlements are mostly located on river banks of Indus and Saraswati. 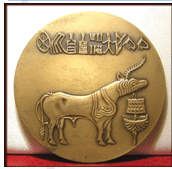 The discovery of granaries and the urban lifestyle of the people proves that the Harappan people were undoubtedly "comfort loving" and were prosperous. It also shows great knowledge of crop-pattern and seasons.

Currency : Thousands of seals have been discovered not only from the Harappans sites but also from the remains of other world civilisations. Every merchant and his family had a seal bearing and emblem and a brief inscription. But it is still unknown whether they used these seals as currency or not. In absence of evidence, it is safe to assume that the Harappans practised barter system and got goods they need in exchange of their articles.

Agriculture : The Indus people sowed seeds in the flood plain in November, when the flood water receded, and reaped their harvests of wheat and barley in April before the advent of the next flood. The Harappans probably used the wooden plough with wooden or copper ploughware.

The Indus people produced wheat, barley, peas, kodon, sanwa, jowar, ragi, etc. They produced two typles of wheat and barley. A good quantity of barley has been discovered at Banwali. In addition to this, they produced sesame and mustard. The Indus people were the earliest people to produce cotton.

Domestication of Animals: Although the Harappans practised agriculture, animals were kept on a large scale Oxen, buffaloes, goats, sheeps domestic fowls and pigs were domesticated. The

humped bulls were regarded as pets. Cats were also domesticated and signs of the feet of both dogs and cats have been noticed. They also kept asses and camels, which were possibly used as beasts of burden. Elephants were well known to the Harappan, who were also acquanited with the rhinoceros, spotted dear, sambhar deer, hog deer, wild pig etc. Therefore there is ample evidence to show patrolism of Harappan people.

Trade and Commerce :The thriving agriculural economy supported a flourishing trade both within the northern and western areas of the sub-continent and between the people of this culture and those of the Persian and Gulf and Mesopotamia. The products of Indus have been found in Mesopotamia. It seals and produce were also discovered at Sumer. The findings of Indus seals suggest that merchants from Indus actually resided in Mesopotamia. Their chief merchandise were probably cotton exported from probably Lothal harbour. The Mesopotamian records from about 2350 BC refer to trade relations with Meluha, which was the ancient name given to the Indus region.

Crafts and Industies : Mohenjo-daro was a great industrial center. Weaving was probably the chief industry. Harappans were also acquainted with the art of dyeing. Pottery was an important industry. We should not forgot that harappan pictographical scripts are mainly found on potteries. Harappans used to export these pots made on potter's wheel and burnt in kilns not only to nearby areas but alo to the far-flung places. The art of smelting metals were well-known to the people of Harappa. They also attest to a class of mesons. The Harappans also practised boat-making, seal-making and terracotta manufacturing.

Weights and Measures : The regulations of weights and measures forms the basis of trade and Harappans were very accurate in this respect. The sexagesimal system and the decimal system were known to the Harappans. The weights were of cubical and spherical in shape and were made of chert, jasper and agate and sometimes of grey stone and were in series, first doubling from 1, 2, 4, 8 to 64 then going to 160, 320, 640 and so forth.

Communications : Transport and communications are a major part of trade and commerce. Harappans also had good transporting system for their internal and external trade. Representation of ships and boats are found on some seals and as graffiti on pottery. For onland journey and transport, they relied upon the bullock carts and rarely horse carts. They practicsed navigation on the coasts of the Arabian Sea. Mohenjo-daro seals bear the picture of ship.

Arts : The Harappans were utilitarians although not completely devoid of artistic sense. They were well-acquainted with the manufacture and use of bronze. Bronze smiths produced images and utensils. They also made several kinds of tools and weapons, namely axes, knives and spears. Jewelleries of Silver, gold and copper were also made on a large scale.

The most notable artistic achievement of the Harappans was in their seal engravings, especially those of animals. The pots were beautifully painted in several colours such as red, black, green and rarely yellow. The terracotta figuries, both human and animal, and toys prove that the Harappa people, enojoyed the work of art. Status made of bronze, stone and sandstone repsresent their high sense of art.

There is no idea about the political organization of the Harappans. Perhaps the Harappan rulers were more concerned with commerce that with conquests, and Harappa was possibly ruled by the a class of merchants. Accroding to Amaur De Riencourt : "All the evidence points to a high degree of standardization and organization, implying strong centralisation with full control over production and distribution and probably a high efficient system of taxation". Evidences, like drainage, town planning, trading items suggests that there was an organisation like a municipal corporation to look after the civil amenities of the people.

Relation with other Civilizations

The indus valley civilization had a direct contact with many of the contemporary world civilizations: Mesopotamia, Egypt, Turkmenia, Oman and Bahrain. Harappan shells and carnelian beads have been found iin Mesopotamian royal burials, Mesopotamian clay tahlets refer to wood, gold and lapis lazuli coming from Meluha, the ancient Akkadian name for the Indus region. Harrapan Seals and other objects have been excavated in several Mesopotamian cities, such as Sura, Kish, Nippur and Ur. Evidence of a direct relationship between Harappan culture and Egypt in fragmentary and inconclusive. There are evidences of Harappan artfacts, such as etched carnelian beads and ivory, in Bahrain.

The Harappan culture flourished until about 1800 BC. Afterwards, the culture began to decline. There is no unanimity among historian on the exact reason of the decline of this urban civilization. Different theories of decline have been put forward by different scholars.The following table gives the important theories and their profounders as regards decline of the Indus culture. The social life of the Harappans can be arranged into following categories :-

Disposal of the Dead : No definite proof is available regarding the disposal of the dead bodies yet. It is believed that the dead were either burnt completely, cremation followed by burial of ashes and rarely the burial of the dead after exposure to birds and beasts. But R-37 of Harappa suggests grave burial as a large practice.

The first thing that strikes us with regard to Harappan culture is the town planning and urbanisation. Mohenjo-daro, Harappa, Lothal or Sutkagendor were built on similar plan. To the west of each a citadel built on a high platform suggest division in society or some upper class existence. It was defended by walll and on it were construced the public buildings. Below this citadel was the town proper. 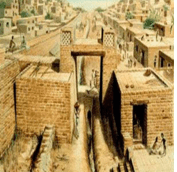 Everywhere, the main streets ran from north to south and other streets ran at right angles to the main streets. Houses, residential or others, stood on both sides of the streets. Both at Harappa and Mohenjo-daro, houses were built of kiln-burnt bricks. At Lothal and Kalibangan, residential houses were made of sun-dried bricks. An average house had, besides kitchen and bath, four to six living rooms. Large houses with thity rooms and staircases suggest that there were large two or three storyed buildings. Most of the houses had wells within them and a drainage system carried the waste water to the main underground drain of the steet.