Industrial policy means rules, regulations, principles, policies and procedures laid down by government for regulating, developing, and controlling industrial undertakings in the country.

It prescribes the respective roles of the public, private, joint, and co-operative sectors for the development of industries. It also indicates the role of the large, medium and small scale sector.

It incorporates fiscal and monetary policies, tariff policy, labour policy, and the government attitude towards foreign capital, and Role to be played by multinational corporations in the development of the industrial sector.

Pandit Jawaharlal Nehru laid the foundations of modern India. It is due to his initiative that India now has a strong and diversified industrial base and is a major industrial nation of the world. The goals and objectives set out for the nation by Pandit Nehru on the eve of Independence were as follows:

These objectives remain as valid today as at the time Pandit Nehru first set them out before the nation.

Items of basic importance, would be planned and regulated by the Central government :The following are such basic industries: Salt Automobiles and tractors

The 1948 resolution accepted the importance of small and cottage industries in industrial development. These industries are particularly suited for the utilization of local resources and for the achievement of the local self-sufficiency in respect of certain types of essential consumer goods like food, cloth and agricultural implements.

The healthy expansion of cottage and small scale industries depends upon a number of factors like the provision of raw materials, cheap power, technical advice, and where necessary, safeguards against intensive competition by large scale manufacture, as the education of the worker in the use of the best available technique. Most of these are receiving the attention of the Governments.

Industry was divided into three categories

Schedule A : includes 17 industries where centre was given complete monopoly.

Schedule B: to be progressively state owned; 12 groups of industries were under it.

Schedule C : included the rest of the industries, to be under ferrate sector.

The schedule B &. C industries came under this provision. It established License-quota-Permits regime in the economy.

It was pledged for accelerated industrialization & growth in the economy. Emphasis was on heavy Industries.

Emphasis committed on small industries as well as khedi and village industries.

Agriculture sector was pledged as a priority.

–  Upgrading the technology of small units.

– the development of small scale industries, the investment limit in the case of tiny units was enhanced to Rs.2 lakh, of a small scale units to Rs.20 lakh and of ancillaries to Rs.25 lakh.

– Industrial processes and technologies involving optimum utilization of energy or the exploitation of alternative sources of energy for giving special assistance, including finance on concessional terms.

– social and economic justice, to end poverty and unemployment and to build a modern, democratic, socialist, prosperous and forward-looking India

– Development and utilization of indigenous capabilities in technology and manufacturing as well as its up gradation to world standards.

– Sound policy framework encompassing encouragement of entrepreneurship, development of indigenous technology through investment in research and development, bringing in new technology, dismantling of the regulatory system, development of the capital markets and increasing competitiveness for the benefit of the common man.

– The spread of industrialization to backward areas of the country will be actively promoted through appropriate incentives, institutions and infrastructure investments.

– The Government will ensure that the public sector plays its rightful role in the evolving socioeconomic scenario of the country.

– The major objectives of the new industrial policy package will be to build on the gains already made, correct the distortions or weaknesses that may have crept in, maintain a sustained growth in productivity and gainful employment and attain international competitiveness. 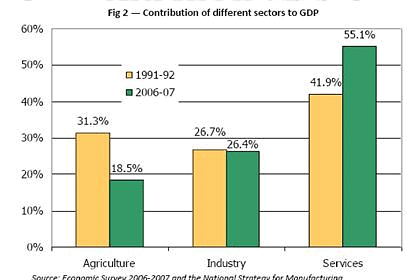 India has been able to grab a significant portion of the world trade pie with its booming economy and a billion – plus markets, says a report by the World Trade Organization (WTO).

According to the World Trade Statistics report, India’s share in the global trade, including trade in merchandise and services sector has increased from 1.1 percent in 2004 to 1.5 percent in 2006.