The document Insolation And Temperature - Physical Geography, UPSC, IAS. UPSC Notes | EduRev is a part of the UPSC Course Geography (Prelims) by Valor Academy.
All you need of UPSC at this link: UPSC

Insolation is the incoming solar radiation. It is received in the form of short waves. The earth’s surface receives this radiant energy at the rate of two calories per square centimetre per minute.

The solar output received at the top of the atmosphere varies slightly in a year due to the variations in the distance between the earth and the sun. During its revolution around the sun, the earth is farthest from the sun (152 million km on 4th July). This position of the earth is called aphelion. On 3rd January, the earth is the nearest to the sun (147 million km). This position is called perihelion. Therefore, the annual insolation received by the earth on 3rd January is slightly more than the amount received on 4th July. However, the effect of this variation in the solar output is masked by other factors like the distribution of land and sea and the atmospheric circulation. Hence, this variation in the solar output does not have great effect on daily weather changes on the surface of the earth.

Of the total radiant solar energy that strikes the outer surface of the atmosphere, only half is able to reach the earth’s surface directly or indirectly and is absorbed. The rest is lost through the atmosphere. 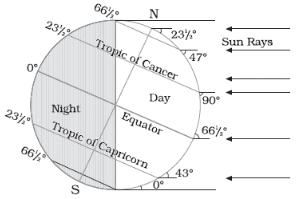 The amount of insolation reaching the earth’s surface and its effectiveness per unit area depend upon (i) the angle of incidence (ii) the duration of sunshine (iii) transparency of the atmosphere.

The fact that the earth’s axis makes an angle of 66½ with the plane of its orbit round the sun has a greater influence on the amount of insolation received at different latitudes. The second factor that determines the amount of insolation received is the angle of inclination of the rays. This depends on the latitude of a place. The higher the latitude the less is the angle they make with the surface of the earth resulting in slant sun rays. The area covered by vertical rays is always less than the slant rays. If more area is covered, the energy gets distributed and the net energy received per unit area decreases. Moreover, the slant rays are required to pass through greater depth of the atmosphere resulting in more absorption, scattering and diffusion.The atmosphere is largely transparent to short wave solar radiation. The incoming solar radiation passes through the atmosphere before striking the earth’s surface. Within the troposphere water vapour, ozone and other gases absorb much of the near infrared radiation.

Spatial Distribution of Insolation at the Earth’s Surface

cloudiness is the least. Equator receives comparatively less insolation than the tropics. Generally, at the same latitude the insolation is more over the continent than over the oceans. In winter, the middle and higher latitudes receive less radiation than in summer.

HEATING AND COOLING OF THE ATMOSPHERE

Air may be heated in three ways: radiation, conduction and convection.

RADIATION:- It is directs heating of a body or an object by the transmission of heat waves. The amount and nature of radiation are governed by certain basic laws such as:

Transfer of heat through matter by molecular activity is called conduction. When two bodies of unequal temperature are in contact with one another, there is a flow of energy from the warmer to the cooler body. Metals are good conductors. Air, on the hand, is a poor conductor of heat. Consequently, conduction is important only in the lower layers of the atmosphere where the air is in the direct contact with the earth’s surface.

Transfer of heat by the movement of a mass or substance from one place to another is called convection. Convective motions are possible only in liquids and gases when the air in the lower layers of the atmosphere gets heated either by   terrestrial radiation of conduction, it expands. Owing to decrease in density, it moves upward. Continuous ascent of the heated air mass pushes aside the air at the higher levels. As a result, the pushed air mass moves horizontally towards cooler areas and gradually descends down due to increasing density. Due to continuous ascent of the heated air, a vaccum is created in the lower layers of the atmosphere. Cooler air mass moves horizontally near the earth’s surface to fill up this void. Reaching the heated region, it also warm up and rises up. Hence, cyclic movements associated with the convectional currents in the atmosphere transfer heat from the lower layers to the upper layers and heat up the atmosphere. 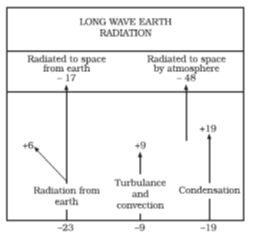 Let us assume that total heat received at the top of the atmosphere is 100 units. Roughly 35 units are reflected back to space, even before reaching the earth’s surface, from top of the clouds, snow and ice covered areas of the earth. The reflected amount of radiation is called the albedo of the earth.The remaining 65 units are absorbed; 14 units within the atmosphere and 51 units by Earth’s surface.

Usage of terms heat and temperature are quite often confusing. Essentially heat is a from of energy which makes things hotter. In other words, it refers to the quantity of energy. Temperature measures the intensity of heat, i.e. the degree of hotness.

A windward coastal location well experienced the full moderating influence of the oceans – cool summer and mild winters. On the other hand, an inland station will have a more continental temperature regime because the winds do not being oceanic influence to it.

The atmosphere is heated mainly from below. The lowest layer of the air in contact with the earth’s surface is, therefore, the warmest. As we go higher, the temperature gradually decreases and the air becomes cooler. The normal lapse rate is roughly 1°C for every 165 metres of ascent.

Occasionally the temperature in the lower layers of the air increases instead of decreasing with elevation. Thus, there is reversal in the vertical distribution of temperature, which is known as the inversion of temperature.