The force method of analysis may be summarized as follows.

Step 4. In the last step, evaluate all other reactions and internal forces from the equilibrium equations.

The method of superposition or the force method as discussed above is applied to any type of structures, i.e. beams, truss and frames or combination of these structures. It is applicable for all general type of loadings.

The deflection of statically determinate structure can be obtained by unit-load method or by moment-area theorem or by any method known to the reader. However, the deflections of few prismatic beams with different boundary conditions and subjected to simple loadings are given in Fig. 7.4. These values will be of help in solving the problems of the present and subsequent lessons. However the students are strongly advised to practice deriving them instead of simply memorizing them.

A continuous beam ABC is carrying a uniformly distributed load of 1 kN/m in addition to a concentrated load of 10 kN as shown in Fig.7.5a, Draw bending moment and shear force diagram. Assume EI to be constant for all members. 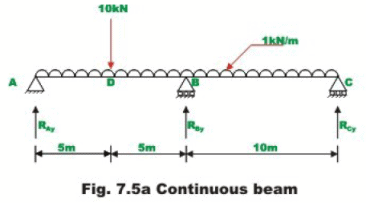 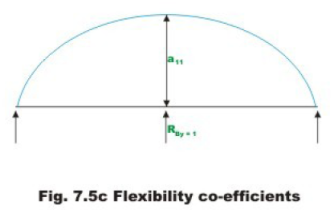 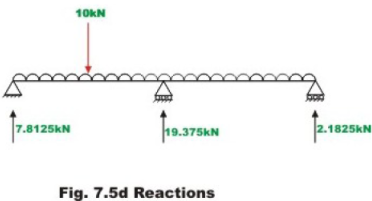 It is observed that the continuous beam is statically indeterminate to first degree. Choose the reaction at B, RBy as the redundant. The primary structure is a simply supported beam as shown in Fig.7.5b.

Now, compute the deflection at B, in the released structure due to uniformly distributed load and concentrated load. This is accomplished by unit load method. Thus,

In the next step, apply a unit load at B in the direction of RBy (upwards) and calculate the deflection at B of the following structure. Thus (see Fig. 7.5c),

Now, deflection at B in the primary structure due to redundant RB is

In the actual structure, the deflection at B is zero. Hence, the compatibility equation may be written as

Substituting for ΔL and ΔB in equation (4),

The other two reactions are calculated by static equilibrium equations (vide Fig. 7.5d)

The shear force and bending moment diagrams are shown in Fig. 7.5e and Fig. 7.5f respectively.

A propped cantilever beam AB is subjected to a concentrated load of 60 kN at 3m from end A as shown in Fig. 7.6a. Draw the bending moment and shear force diagrams by the force method. Assume that the flexural rigidity of the beam, EI to be constant throughout. 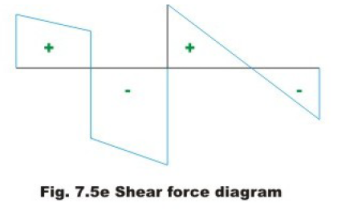 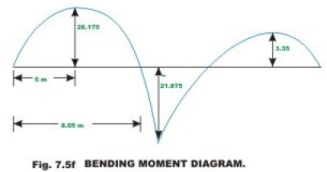 The deflection of the released structure is,

The deflection at point B due to unit load applied in the direction of redundant R1 is (vide Fig 7.6c)

Now the deflection at B due to redundant is R1 is

From the original structure it is seen that the deflection at B is zero. Hence, the compatibility condition for the problem may be written as,

The vertical reaction and fixed end moment at A can be determined from equations of statics. Thus,