The document Introduction to Law CLAT Notes | EduRev is a part of the CLAT Course Static GK for Exam Preparation.
All you need of CLAT at this link: CLAT

Why is the knowledge of law important?One should know law because ignorance of law is no excuse.Although it is not possible for a layman to be aware of every branch of law, yet he must be familiar with the general principles of the law of the country.For example, if a person boards a bus and travels without a ticket, he cannot plead that he was ignorant about the purchase of ticket. 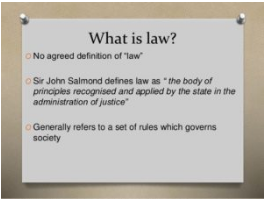 What are the SOURCES OF LAW?Our entire set of laws has been derived from various sources. Let us examine them.

Custom:Custom means established pattern of behaviour followed by people over generations. It is an ancient form of source and its importance is now on the decline, with rapid growth of legislation and precedents.1. For example, The Hindu Marriage Act derivers certain provisions from the Smritis and Vedas.Custom will be valid only if it fulfils certain requirements, such as2. It must be in practice from time immemorial;3. It must be certain and definite;4. It must be reasonable;5. It must have been continuously in practice;6. It must not be opposed to public policy;

ENGLISH LAW:The modern Indian law is closely modelled on the lines of English law. Many Acts such as Indian Contract Act, Negotiable Instruments Act, Partnership Act, were enacted, when India was under the British regime.

PRECEDENT:Precedent or case law as it is popularly known is the decision pronounced by a Court.The general rule of doctrine of precedents is that every Court is bound by the decisions of the Court superior to it.

STATUTE:The recent legislations such as Companies Act of 1956, Information Technology Act of 2000, Trademarks Act, 1999 are a result of legislations passed by the Parliament.

PROCEDURAL LAW:Procedural law on the other hand, deals with the procedural aspects of securing justice.1. For example, Civil Procedure Code outlines the jurisdiction of Courts.2. The Criminal Procedure Code throws light on aspects such as filing FIR, arrest of persons, search warrants, trial procedures etc.Thus a sound knowledge of both substantive and procedural laws is necessary to understand and appreciate law.

Important Note:While studying substantive law, never worry about how to prove, what to prove. It can be dealt with under the procedural law.

3. Civil Procedure Code, 1980a. It is a procedural lawb. It deals with laws relating to the procedure of the courts of civil Judicaturec. It throws light on aspects such asi. Territorial and Pecuniary Jurisdiction of Courtsii. Contents of plaint, written statementiii. Concepts such as Res Judicata, Sub judice.iv. Review, Reference of cases.v. Decree, order and Judgment.

4. Code of Criminal Procedurea. It is also a procedural lawb. It deals with laws relating to the procedure adopted in the context of criminal offences.c. It elucidates aspects such as1. Hierarchy of criminal courts and their powers.2. Classification of offences into cognizable and non con-cognizable offences, etc.3. First information report4. Reference and Revisions5. Imprisonment, Death sentence, etc.

6. The Indian Evidence Acta. It is concerned with the mode of proving whether a particular person committed the offence or not.b. The Evidence Act provides answers to1. What facts may and may not be proved?2. How is the proof to be given?3. What kind of proof is to be given?4. Who is to give that proof? etc.

7. Limitation Acta. It lays down the period within which a civil dispute shall be raised in a court.b. It applies mainly to civil laws.c. The rationale behind the Act is that law seeks to help the diligent and not the indolent.d. The law of limitation bars remedy but does not extinguish rights.e. It contains two schedules, which prescribe the time period, within which action may be initiated in the court.For example, in the case of torts, the limitation period is one year.

Generally, for most contracts, the limitation period is three years.

8. Sale of Goods Acta. It was enacted in the year 1930.b. Prior to that, it was a part of Indian Contract Act.c. It deals with sale of movable goods.

9. Transfer of Property Acta. It was enacted in the year 1882.b. Its objective is to provide for laws relating to immovable propertyc. It includes provisions pertaining to transfer of immovable property through1. Sale2. Mortgage3. Charge4. Lease5. Gift

10. Negotiable Instruments Acta. It deals with law pertaining to instruments of credit such as1. Bills of exchange2. Promissory note3. Chequeb. It lays down legal rules pertaining to dishonour of cheques.

Plaintiff – A person who files the suit in a court.Defendant – The person against whom the suit is filedSuit – A process instituted in a court for protection of rightsDamages – Monetary compensation ordered by the court for breach of Contract or tort.Void – NullityVoidable – Capable of being set aside at the option of a party