Q.340. A rod moves lengthwise with a constant velocity v relative to the inertial reference frame K. At what value of v will the length of the rod in this frame be η = 0.5% less than its proper length?

Solution. 340. From the formula for length contraction

Q.341. In a triangle the proper length of each side equals α. Find the perimeter of this triangle in the reference frame moving relative to it with a constant velocity V along one of its (a) bisectors; (b) sides.

Solution. 341. (a) In the frame in which the triangle is at rest the space coordinates of the vertices are

all measured at the same time t. In the moving frame the corresponding coordinates at time t' are

The perimeter P is then 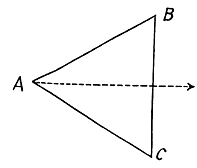 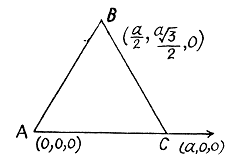 The perimeter P is then

Solution. 342. In the rest frame, the coordinates of the ends of the rod in terms of proper length l0

at time t. In the laboratory frame the coordinates at time t' are

Thus the taper angle in the frame K is

and the lateral surface area is,

Solution. 344. Because of time dilation, a moving clock reads less time. We write,

Solution. 345. In the frame K the length l of the rod is related to the time of flight Δt by

Q.346.  The proper lifetime of an unstable particle is equal to Δt0  = 10 ns. Find the distance this particle will traverse till its decay in the laboratory fraine of reference, where its lifetime is equal to Δt = 20 ns.

Solution. 346. The distance travelled in the laboratory frame of reference is vΔ t where v is the velocity of the particle. But by time dilation

Thus the distance traversed is

Q.347. In the reference frame K a muon moving with a velocity v = 0.990c travelled a distance l = 3.0 km from its birthplace to the point where it decayed. Find: (a) the proper lifetime of this muon; (b) the distance travelled by the muon in the frame K "from the muon's standpoint".

Solution. 347. (a) If τ0 is the proper life time of the muon the life time in the moving frame is

Q.348. Two particles moving in a laboratory frame of reference along the same straight line with the same velocity v = (3/4)c strike against a stationary target with the time interval Δt = 50 ns. Find the proper distance between the particles prior to their hitting the target.

Solution. 348. In the frame K in which the particles are at rest, their positions are A and B whose coordinates may be taken as,

Suppose B hits a stationary target in K' after time t'B while A hits it after time tB + Δt. Then, 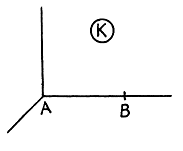 Solution. 349. In the reference frame fixed to the ruler the rod is moving with a velocity v and suffers Lorentz contraction. If l0 is the proper length of the rod, its measured length will be

Q.350. Two rods of the same proper length l0  move toward each other parallel to a common horizontal axis. In the reference frame fixed to one of the rods the time interval between the moments, when the right and left ends of the rods coincide, is equal to Δt. What is the velocity of one rod relative to the other?

Solution. 350. The coordinates of the ends of the rods in the frame fixed to the left rod are shown. The points B and D coincides when

The points A and E coincide when

by Lorentz Fitzgerald contraction formula. Thus the time lag of the decay time of B is

Q.352. A rod AB oriented along the x axis of the reference frame K moves in the positive direction of the x axis with a constant velocity v. The point A is the forward end of the rod, and the point B its rear end. Find: (a) the proper length of the rod, if at the moment tA the coordinate of the point A is equal to xA, and at the moment tB the coordinate of the point B is equal to xB; (b) what time interval should separate the markings of coordinates of the rod's ends in the frame K for the difference of coordinates to become equal to the proper length of the rod.

Solution. 352. (a) In the reference frame K with respect to which the rod is moving with velocity v, the coordinates of A and B are 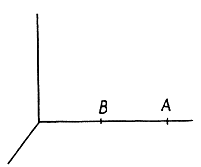 Q.353. The rod A'B' moves with a constant velocity v relative to the rod AB (Fig. 1.91). Both rods have the same proper length l0 and at the ends of each of them clocks are mounted, which are synchronized pairwise: A with B and A' with B'. Suppose the moment when the clock B' gets opposite the clock A is taken for the beginning of the time count in the reference frames fixed to each of the rods. Determine:

(a) the readings of the clocks B and B' at the moment when they are opposite each other; (b) the same for the clocks A and A'.

Solution. 353.  At the instant the picture is taken the coordintes of A, B, A', B' in the rest frame of AB are

In the frame in which B', A' is at rest the time corresponding this is by Lorentz tranformation.

Similarly in the rest frame of A, B, te coordinates of A at other times are

A' is opposite to A at time

The corresponding time in the frame in which A', B' are at rest is

Q.354. There are two groups of mutually synchronized clocks K and K' moving relative to each other with a velocity v as shown in Fig. 1.92. The moment when the clock A' gets opposite the clock A is taken for the beginning of the time count. Draw the approximate position of hands of all the clocks at this moment "in terms of the K clocks"; "in terms of the K' clocks".

and we get the diagram given below "in terms o f th eif-clock ".

The situation in terms of the K' clock is reversed.

Q.355. The reference frame K' moves in the positive direction of the x axis of the frame K with a relative velocity V. Suppose that at the moment when the origins of coordinates O and O' coincide, the clock readings at these points are equal to zero in both frames. Find the displacement velocity

of the point (in the frame K) at which the readings of the clocks of both reference frames will be permanent- ly identical. Demonstrate that

Solution. 355. Suppose x (t) is the locus of points in the frame K at which the readings of the clocks of both reference system are permanently identical then by Lorentz transformation

(tan h θ is a monotonically increasing function of θ)