The document Irodov Solutions: Relativistic Mechanics- 2 Class 12 Notes | EduRev is a part of the NEET Course I. E. Irodov Solutions for Physics Class 11 & Class 12.
All you need of NEET at this link: NEET

Solution. 356. We can take the coordinates of the two events to be

In the moving frame the coordinates of A and B become 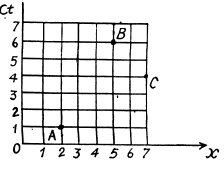 So the distance between the two events in the fram in which they are simultaneous is 4 units = 4m.

Q. 358. The velocity components of a particle moving in the xy plane of the reference frame K are equal to vx  and vy. Find the velocity v' of this particle in the frame K' which moves with the velocity V relative to the frame K in the positive direction of its x axis.

Solution. 358. By the velocity addition formula

Solution. 359. (a) By definition the velocity of apporach is

in the reference frame K .

(b) The relative velocity is obtained by the transformation law

Q. 360. Two rods having the same proper length l0  move lengthwise toward each other parallel to a common axis with the same velocity v relative to the laboratory frame of reference. What is the length of each rod in the reference frame fixed to the other rod?

Solution. 360. The velocity of one of the rods in the reference frame fixed to the other rod is

The length of the moving rod in this frame is

Solution. 361. The approach velocity is defined by

in the laboratory frame.

On the other hand, the relative velocity can be obtained by using the velocity addition formula and has the components

Solution. 362. The components of the velocity of the unstable particle in the frame K are 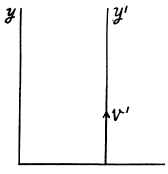 so the velocity relative to K is

The life time in this frame dilates to

and the distance traversed is

Solution. 363. In the frame K' the components of the velocity of the particle are 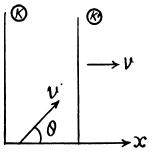 After performing Lorentz transformation to the frame K we get In the frame K' moving with velocity

with respect to K, the velocities are respectively,

The latter velocity is written as

Thus the acceleration in the K' frame is

is along jt-axis. In the K frame the velocities are

Q. 366. An imaginary space rocket launched from the Earth moves with an acceleration w' = 10g which is the same in every instantaneous co-moving inertial reference frame. The boost stage lasted τ =1.0 year of terrestrial time. Find how much (in per cent) does the rocket velocity differ from the velocity of light at the end of the boost stage. What distance does the rocket cover by that moment?

Solution. 366. In the instantaneous rest frame v = V and

Q. 367. From the conditions of the foregoing problem determine the boost time τ0 in the reference frame fixed to the rocket. Remember that this time is defined by the formula where dt is the time in the geocentric reference frame.

Solution. 367. The boost time τ0 in the reference frame fixed to the rocket is related to the time τ elapsed on the earth by

Q. 368. How many times does the relativistic mass of a particle whose velocity differs from the velocity of light by 0.010% exceed its rest mass?

Q. 369. The density of a stationary body is equal to p0. Find the velocity (relative to the body) of the reference frame in which the density of the body is η = 25% greater than p0.

if the frame K is moving with velocity, v relative to the frame K0. Thus

Q.371. Find the velocity at which the relativistic momentum of a particle exceeds its Newtonian momentum η = 2 times.

Q.372. What work has to be performed in order to increase the velocity of a particle of rest mass mo  from 0.60 c to 0.80 c? Compare the result obtained with the value calculated from the classical formula.

Q.373. Find the velocity at which the kinetic energy of a particle equals its rest energy.

Q.374.  At what values of the ratio of the kinetic energy to rest energy can the velocity of a particle be calculated from the classical formula with the relative error less than ε = 0.010?

the velocity β is given by the classical formula with an error less than ε.

Solution. 375. From the formula

Q.376. A beam of relativistic particles with kinetic energy T strikes against an absorbing target. The beam current equals I, the charge and rest mass of each particle are equal to e and m0 respectively. Find the pressure developed by the beam on the target surface, and the power liberated there.

Solution. 376. Let the total force exerted by the beam on the target surface be .F and the power liberated there be P. Then, using the result of the previous problem we see

since I = Ne, N being the number of particles striking the target per second. Also,

These will be, respectively, equal to the pressure and power developed per unit area of the target if I is current density.

Q.377. A sphere moves with a relativistic velocity v through a gas whose unit volume contains n slowly moving particles, each of mass m. Find the pressure p exerted by the gas on a spherical surface element perpendicular to the velocity of the sphere, provided that the particles scatter elastically. Show that the pressure is the same both in the reference frame fixed to the sphere and in the reference frame fixed to the gas.

Solution. 377. In the tome fixed to the sphere The momentum transferred to the eastically scattered particle is

and the momentum transferred per unit time per unit area is

In the frame fixed to the gas When the sphere hits a stationary particle, the latter recoils with a velocity

The momentum transferred is

Q.378. A particle of rest mass mo  starts moving at a moment t = 0 due to a constant force F. Find the time dependence of the particle's velocity and of the distance covered.

Solution. 378. The equation of motion is

Q.379. A particle of rest mass m0 moves along the x axis of the frame K in accordance with the law

where a is a constant, c is the velocity of light, and t is time. Find the force acting on the particle in this reference frame.

Q.380. Proceeding from the fundamental equation of relativistic dynamics, find: (a) under what circumstances the acceleration of a particle coincides in direction with the force F acting on it; (b) the proportionality factors relating the force F and the acceleration w in the cases when F ⊥ and F II v, where v is the velocity of the particle.

Q.381. A relativistic particle with momentum p and total energy E moves along the x axis of the frame K. Demonstrate that in the frame K' moving with a constant velocity V relative to the frame K in the positive direction of its axis x the momentum and the total energy of the given particle are defined by the formulas:

Solution. 382. For a photon moving in the x direction

In the moving frame,

Q.383. Demonstrate that the quantity E2 — p2c2  for a particle is an invariant, i.e. it has the same magnitude in all inertial reference frames. What is the magnitude of this invariant?

Q.384. A neutron with kinetic energy T = 2m0c2, where m0 is its rest mass, strikes another, stationary, neutron. Determine:  (a) the combined kinetic energy

each neutron in that frame; (b) the velocity of the centre of inertia of this system of particles. Instruction. Make use of the invariant E2  — p2c2  remaining constant on transition from one inertial reference frame to another (E is the total energy of the system, p is its composite momentum).

where wc have used the result of problem (Q.375) Then

Total energy in the CM frame is

Q.385. A particle of rest mass m0 with kinetic energy T strikes a stationary particle of the same rest mass. Find the rest mass and the velocity of the compound particle formed as a result of the collision.

Solution. 386. Let T = kinetic energy of a proton striking another stationary particle of the same rest mass. Then, combined kinetic energy in the CM frame

Q.387. A stationary particle of rest mass m0 disintegrates into three particles with rest masses m1, m2, and m3. Find the maximum total energy that, for example, the particle m1 may possess.

The R.H.S. is an invariant We can evaluate it in any frame. Choose the CM frame of the particles 2 and 3.

Solution. 388. The velocity of ejected gases is u realtive to the rocket. In an earth centred frame it is

Here - dm is the mass of the ejected gases, so