Q. 200. A planet of mass M moves along a circle around the Sun with velocity v = 34.9 km/s (relative to the heliocentric reference frame). Find the period of revolution of this planet around the Sun.

(Here ms the mass of the Sun.)

Q. 201.  The Jupiter's period of revolution around the Sun is 12 times that of the Earth. Assuming the planetary orbits to be circular, find: (a) how many times the distance between the Jupiter and the Sun exceeds that between the Earth and the Sun; (b) the velocity and the acceleration of Jupiter in the heliocentric reference frame.

Ans. For any planet

It is sufficient to consider the motion be along a circle o f semi-m ajor axis r + R/2 for T does not depend on eccentricity.

(again ms is the mass of the Sun)

Q. 203. A small body starts falling onto the Sun from a distance equal to the radius of the Earth's orbit. The initial velocity of the body is equal to zero in the heliocentric reference frame. Making use of Kepler's laws, find how long the body will be falling.

Ans. We can think of the body as moving in a very elongated orbit of maximum distance R and minimum distance 0 so semi major axis = R/2. Hence if τ is the time of fall then

Q. 204. Suppose we have made a model of the Solar system scaled down in the ratio η but of materials of the same mean density as the actual materials of the planets and the Sun. How will the orbital periods of revolution of planetary models change in this case?

If the distances are scaled down, R3/2 decreases by a factor η3/2 and so does ms . Hence T does not change.

Q. 205. A double star is a system of two stars moving around the centre of inertia of the system due to gravitation. Find the distance between the components of the double star, if its total mass equals M and the period of revolution T.

Ans. The double star can be replaced by a single star of mass

moving about the centre of mass subjected to the force

Ans. (a) The gravitational potential due to m1 at the point of location of m2 :

(b) Choose the location of the point mass as the origin. Then the potential erfeigy dU of an element of mass

of the rod in the field of the point mass is

The force of interaction is

Q. 207. A planet of mass m moves along an ellipse around the Sun so that its maximum and minimum distances from the Sun are equal to r1  and r2  respectively. Find the angular momentum M of this planet relative to the centre of the Sun.

Ans. As the planet is under central force (gravitational interaction), its angular momentum is conserved about the Sun (which is situated at one of the focii of the ellipse)

From the conservation of mechanical energy of the system (Sun + planet),

Q. 208. Using the conservation laws, demonstrate that the total mechanical energy of a planet of mass m moving around the Sun along an ellipse depends only on its semi-major axis a. Find this energy as a function of a.

Ans. From the previous problem, if r1 , r2 are the maximum and minimum distances from the sun to the planet and v1 , v2 are the corresponding velocities, then, say,

(Here Af is angular momentum of the planet and m is its mass). For extreme position

and we get the quadratic

The sum of the two roots of this equation are

Q. 209. A planet A moves along an elliptical orbit around the Sun. At the moment when it was at the distance r0  from the Sun its velocity 'was equal to v0 and the angle between the radius vector r0  and the velocity vector v0 was equal to α. Find the maximum and minimum distances that will separate this planet from the Sun during its orbital motion.

Ans. From the conservtion of angular momentum about the Sun.

From conservation of mechanical eneigy,

Q. 210. A cosmic body A moves to the Sun with velocity v0(when far from the Sun) and aiming parameter l the arm of the vector v0 elative to the centre of the Sun (Fig. 1.51). Find the minimum distance by which this body will get to the Sun.

Ans. At the minimum separation with the Sun, the cosmic body’s velocity is perpendicular to its position vector relative to the Sun. If rmin be the sought minimum distance, from conservation of angular momentum about the Sun (C).

From conservation of mechanical energy of the system (sun + cosmic body),

Ans. Suppose that the sphere has a radius equal to a. We may imagine that the sphere is made up of concentric thin spherical shells (layers) with radii ranging from 0 to a, and each spherical layer is made up of elementry bands (rings). Let us first calculate potential due to an elementry band of a spherical layer at the point of location of the point mass m (say point P) (Fig.). As all the points of the band are located at the distance l from the point P, so,

Differentiating Eq. (3), we get 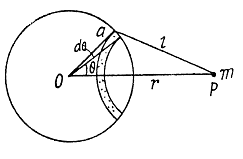 Now integrating this Eq. over the whole spherical layer

Equation (6) demonstrates that the potential produced by a thin uniform spherical layer outside the layer is such as if the whole mass of the layer were concentrated at it’s centre; Hence the potential due to the sphere at point P;

This expression is similar to that of Eq. (6)

Hence thte sought potential eneigy of gravitational interaction of the particle m and the sphere,

Q. 212. Demonstrate that the gravitational force acting on a par- ticle A inside a uniform spherical layer of matter is equal to zero.

Ans. (The problem has already a dear hint in the answer sheet of the problem book). Here we adopt a different method.Let m be the mass of the spherical layer, wich is imagined to be made up of rings. At a point inside the spherical layer at distance r from the centre, the gravitational potential due to a ring element of radius a equals,

Q. 213. A particle of mass m was transferred from the centre of the base of a uniform hemisphere of mass M and radius R into infinity. What work was performed in the process by the gravitational force exerted on the particle by the hemisphere?

Ans. One can imagine that the uniform hemisphere is made up of thin hemispherical layers of radii ranging from 0 to R. Let us consider such a layer (Fig.). Potential at point O, due to this layer is,

(This is because all points of each hemispherical shell are equidistant from O.)

Hence, the work done by the gravitational field force on the particle of mass m, to remove it to infinity is given by the formula 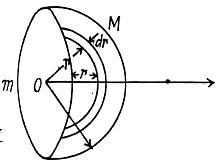 (The work done by the external agent is - A.)

Q. 214. There is a uniform sphere of mass M and radius R. Find the strength G and the potential φ of the gravitational field of this sphere as a function of the distance r from its centre (with r < R and r > R). Draw the approximate plots of the functions G (r) and φ (r).

Accordance with the Eq. (1) of the solution of 1.212, potential due to a spherical shell of radius a, at any point, inside it becomes

For a point (say P) which lies inside the uniform solid sphere, the potential φ at that point may be represented as a sum.

The potential φ2 produced by the layer (thick shell) is the same at all points inside it. The potential φ2 is easiest to calculate, for the point positioned at the layer’s centre. Using Eq. (B)

is the mass of a thin layer between the radii r and r + dr.

The plots φ (r) and G (r) for a uniform sphere of radius R are shown in figure of answersheet.

at a point  inside the sphere at a distance r from its centre, let us consider a Gaussian surface of radius r, Then,

Integrating and summing up, we get

And from Gauss’s theorem for outside it :

Q. 215. Inside a uniform sphere of density p there is a spherical cavity whose centre is at a distance l from the centre of the sphere. Find the strength G of the gravitational field inside the cavity.

Ans. Treating the cavity as negative mass of density - p in a uniform sphere density + p and using the superposition principle, the sought field strength is :

are the position vectors of an orbitrary point P inside the cavity with respect to centre of sphere and cavity respectively.)

Q. 216. A uniform sphere has a mass M and radius R. Find the pressure p inside the sphere, caused by gravitational compression, as a function of the distance r from its centre. Evaluate p at the centre of the Earth, assuming it to be a uniform sphere.

Ans. We partition the solid sphere into thin spherical layers and consider a layer of thickness dr lying at a distance r from the centre of the ball. Each spherical layer presses on the layers within it The considered layer is attracted to the part of the sphere lying within it (the outer part does not act on the layer). Hence for the considered layer 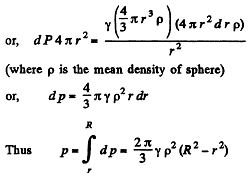 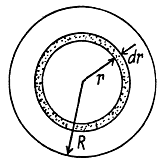 Putting r = 0, we have the pressure at sphere’s centre, and treating it as the Earth wheremean density is equal to

Ans. (a) Since the potential at each point of a spherical surface (shell) is constant and is equal to

We obtain in accordance with the equation

(The factor 1/2 is needed otherwise contribution of different mass elements is counted twice.]

(b) In this case the potential inside the sphete depends only on r (see Eq. (C) of the solution of oroblem 1.214)

Here dm is the mass of an elementry spherical layer confined between the radii r and r + dr :

After integrating, we get