The document Doc: Kepler's Laws of Planetary Motion Class 11 Notes | EduRev is a part of the JEE Course Physics For JEE.
All you need of JEE at this link: JEE

The motions of planet in universe have always been a puzzle. In 17th century Johannes Kepler, after a life time of study worded out some empirical laws based on the analysis of astronomical measurements of Tycho Brahe. Kepler formulated his laws, which are kinematical description of planetary motion. Now we discuss these laws step by step.

Kepler's first law is illustrated in the image shown in figure. It states that "All the planets move around the sun in ellipitcal orbits with sun at one of the focus not at centre of orbit."

Kepler's second Law is basically an alternative statement of law of conservation of momentum. It is illustrated in the image shown in figure(a). We know from angular momentum conservation, in elliptical orbit plane will move faster when it is nearer to the sun. Thus when a planet executes elliptical orbit its angular speed changes continuously as it moves in the orbit. The point of nearest approach of the planet to the sun is termed perihelion. The point of greatest seperation is termed aphelion. Hence by angular momentum conservation we can state that the planet moves with maximum speed when it is near perihelion and moves with slowest speed when it is near aphelion.

Kepler's second law states that "The line joining the sun and planet sweeps out equal areas in equal time or the rate of sweeping area by the position vector of the planet with respect to sun remains constant. "This is shown in figure (b).

In an elemental time the planet will cover a small distance CD = dl and will travel to another adjacent point D as shown in figure (a), thus the distance CD = vdt. In this duration dt, the position vector  sweeps out an area equal to that of triangle SCD, which is calculated as

Thus the rate of sweeping area by the position vector  is

The expression in equation (2) verifies the statement of Kepler' II law of planetary motion.

If 'T' is the period of revolution and 'a' be the semi-major axis of the path of planet then according to Kepler's III law, we have

For circular orbits, it is a special case of ellipse when its major and minor axis are equal. If a planet is in a circular orbit of radius r around the sun then its revolution speed must be given as

Where Ms is the mass of sun. Here you can recall that this speed is independent from the mass of planet. Here the time period of revolution can be given as

Squaring equation written above, we get

Equation (1) verifies the statement of Kepler's third law for circular orbits. Similarly we can also verify it for elliptical orbits. For this we start from the relation we've derived earlier for rate of sweeping area by the position vector of planet with respect to sun which is given as

Sol. The time period Te of earth around sun of mass Ms is given by

Where re is the radius of the earth.

Similarly, time period Tm of moon around earth is given by

Dividing equation(1) by equation (2), we get

Substituting the given values, we get

Ex.23 A satellite revolves around a planet in an elliptical orbit. Its maximum and minimum distances from the planet are 1.5 × 107 m and 0.5 × 107 m respectively. If the speed of the satellite at the farthest point be 5 × 103 m/s, calculate the speed at the nearest point.

In case of elliptical orbit, the speed of satellite varies constantly as shown in figure. Thus according to the law of conservation of angular momentum, the satellite must move faster at a point of closest approach (Perigee) than at a farthest point (Appogee).

Substituting the given values, we get

Ex.24 Imagine a light planet revolving around a very massive star in a circular orbit of radius r with a period of revolution T. On what power of r, will the square of time period depend if the gravitational force of attraction between the planet and the star is proportional to r-5/2.

Ex.25 A satellite is revolving round the earth in a circular orbit of radius a with velocity v0. A particle is projected from the satellite in forward direction with relative velocity . Calculate, during subsequent motion of the particle its minimum and maximum distances from earth's centre.

The corresponding situation is shown in figure. 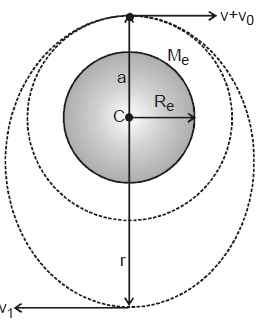 When particle is thrown with the velocity v relative to satellite, the resultant velocity of particle will become

Applying the law of conservation of energy

Thus minimum distance of the particle = a

And maximum distance of the particle =

Sol. (a) The energy of the sky lab on the surface of earth

Ex.27 A satellite is revolving around a planet of mass M in an elliptic orbit of semi-major axis a. Show that the orbital speed of the satellite when it is at a distance r from the focus will be given by :

Sol. As in case of elliptic orbit with semi major axes a, of a satellite total mechanical energy remains constant, at any position of satellite in the orbit, given as

Now, if at position r, v is the orbital speed of satellite, we have