The document Kinematics (Part - 1) - Mechanics, Irodov JEE Notes | EduRev is a part of the JEE Course I. E. Irodov Solutions for Physics Class 11 & Class 12.
All you need of JEE at this link: JEE

Q.1. A motorboat going downstream overcame a raft at a point A; τ = 60 min later it turned back and after some time passed the raft at a distance l = 6.0 km from the point A. Find the flow velocity assuming the duty of the engine to be constant. Ans.

i) Solution From Reference Frame on the Raft 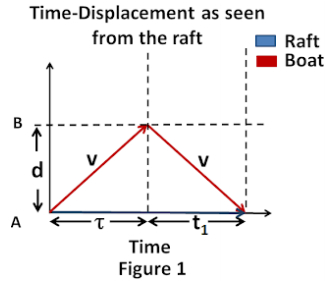 Thus, thus the total time between the two meetings of the raft and the boat is

Now the total distance traveled by the raft is I. This means that,

ii) Solution From Reference Frame on the Ground

the Time-Displacement diagram as seen from the ground of the raft and the boat are shown in Figure 2. 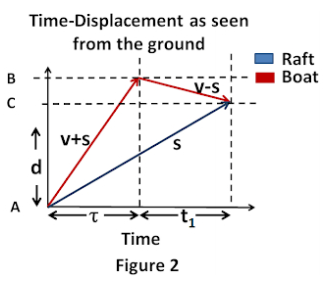 From Figure 2 we can see that,

Now the total distance traveled by the raft is I. This means that,

Thus, the mean velocity is,

Q.3. A car starts moving rectilinearly, first with acceleration ω = 5.0 m/s2  (the initial velocity is equal to zero), then uniformly, and finally, decelerating at the same rate ω, comes to a stop. The total time of motion equals τ = 25 s. The average velocity during that time is equal to (v) = 72 km per hour. How long does the car move uniformly? Ans. 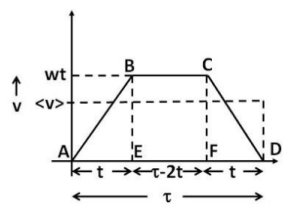 Mean velocity is total distance by total time. The v-t graph is shown in the figure beside. Suppose that time of constant acceleration was t. During the initial acceleration phase thus the car will travel 1/2wt2 and its final speed will be wt . This can also be calculated using the v-t diagram as the area under the line AB (triangle ABE).

. This can be calculated in the v - t diagram as the area of the triangle CFD.

The total distance traveled is thus given by,

The average velocity during the entire time is thus given by,

The above equation is a quadratic equation which has two possible solutions,

Clearly we choose the -ive sign since t cannot exceed the total time. The uniform interval is thus given by,

Q.4. A point moves rectilinearly in one direction. Fig. 1.1 shows the distance s traversed by the point as a function of the time t. Using the plot find:(a) the average velocity of the point during the time of motion;(b) the maximum velocity;(c) the time moment t0  at which the instantaneous velocity is equal to the mean velocity averaged over the first t0 seconds. 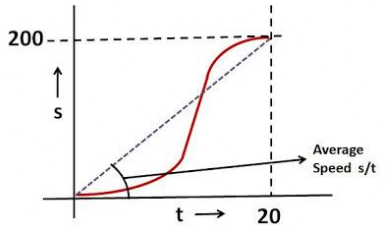 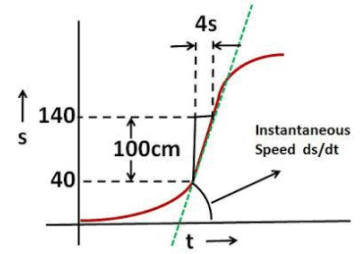 c) At any time the instantaneous speed (ds/dt) is the slope of the curve while the average speed (s/t) is the tangent of the angle of the line joining the origin to the point. 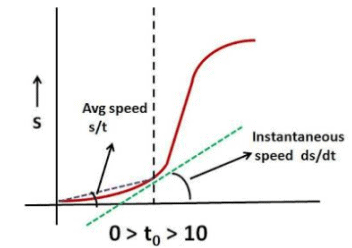 Let us first consider a time t0 during the acceleration phase of the point. This is when t0 is in the interval (0,10). Throughout this region, the slope of the curve will always be greater than that of the line joining the point to the origin since the curve is convex. This means that throughout the acceleration phase, s/t will always be less than ds/dt.

Now lets us consider the region where, the speed is constant. As shown in the picture even in this region the tangent of the line joining the point to the can never catch up the slope of the curve. 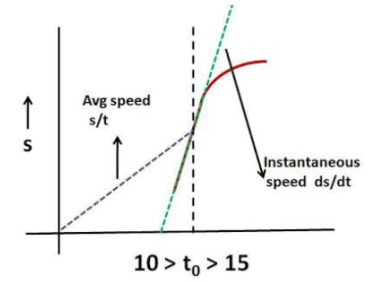 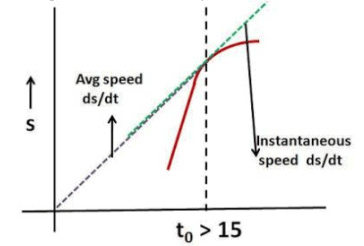 Since exact nature (equation) of the curve of the decelerating part of the curve is not provided (it could be exponentially decaying) it is not possible to mathematically determine the exact value of time at which this happens. However, geometrically one can draw a tangent at every point on the curve and see if it passes through the origin. When this happens it will be the point at which instantaneous speed is same as the average speed.

Some readers have commented that this probably happens at 16s as suggested in the answer. Certainly it seems that way but the exact answer cannot be determined mathematically unless the nature of the curve is specified.

Q. 5. Two particles, 1 and 2, move with constant velocities v1 and v2. At the initial moment their radius vectors are equal to r1 and r2. How must these four vectors be interrelated for the particles to collide?Ans. Let the particles collide at the point A (Fig.), whose position vector is

. If t be the time taken by each particle to reach at point A, from triangle law of vector addition: 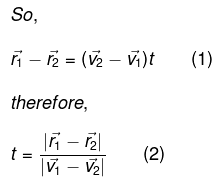 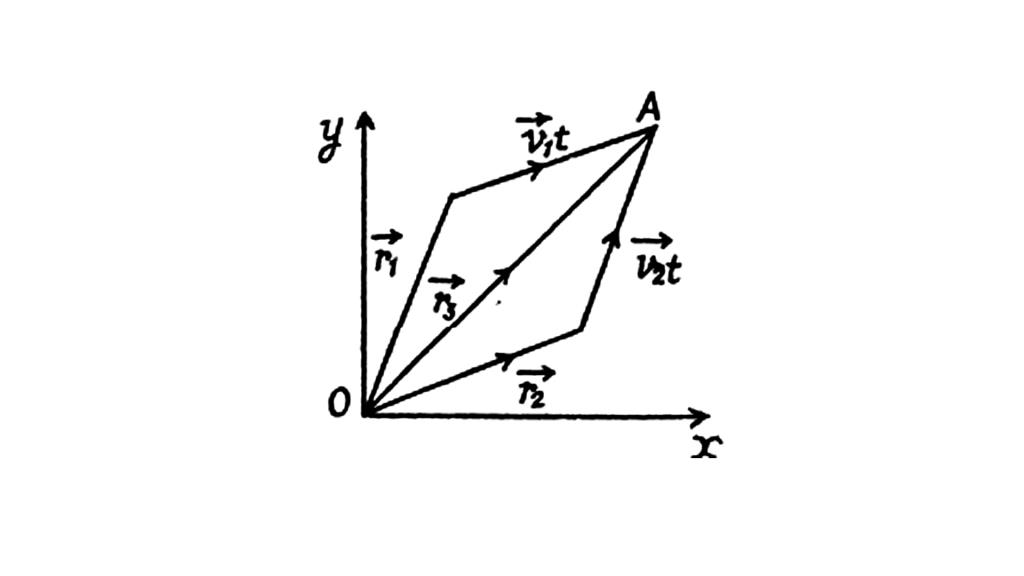 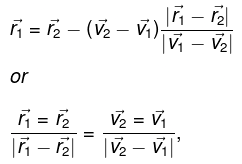 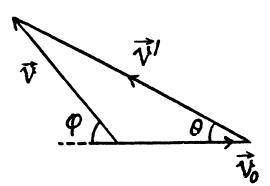 Using (2) and putting the values of v and dθ = 19.1oQ.7. Two swimmers leave point A on one bank of the river to reach point B lying right across on the other bank. One of them crosses the river along with the straight line AB while the other swims at right angles to the stream and then walks the distance that he has been carried away by the stream to get to point B. What was the velocity u of his walking if both swimmers reached the destination simultaneously? The stream velocity v0 = 2.0 km/hour and the velocity if of each swimmer with respect to water equals 2.5 km per hour.Ans.  Let one of the swimmer (say 1) cross the river along AB, which is obviously the shortest path. Time taken to cross the river by the swimmer 1. 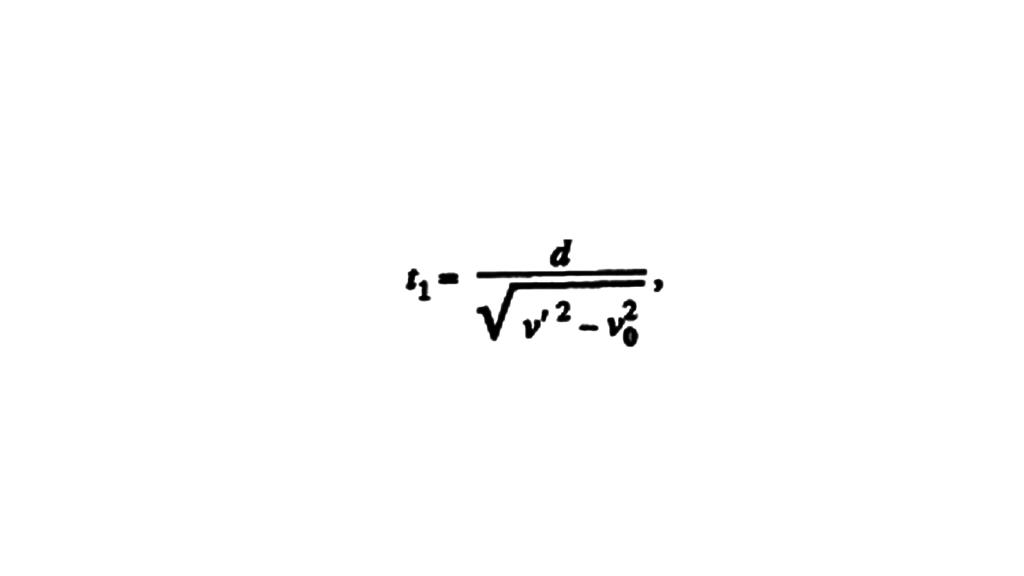 For the other swimmer (say 2), which follows the quickest-path, the time taken to cross the river. 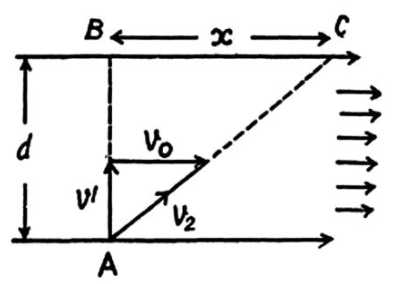 In the time t2, drifting of the swimmer 2, becomes

On solving we get

Q.8. Two boats, A and B, move away from a buoy anchored at the middle of a river along the mutually perpendicular straight lines: the boat A along the river, and the boat B across the river. Having moved off an equal distance from the buoy the boats returned. Find the ratio of times of motion of boats τA/τB  if the velocity of each boat with respect to water is η1 = 1.2 times greater than the stream velocity. Ans. 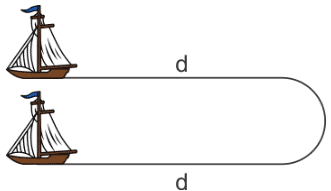 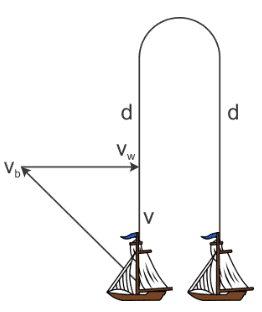 For boat B:The velocity of boat is

Time to reach the same point back is

Q.9. A boat moves relative to water with a velocity which is n = 2.0 times less than the river flow velocity. At what angle to the stream direction must the boat move to minimize drifting? Ans. Let v0 be the stream velocity and v' the velocity of boat with respect to water.At

some drifting of boat is inevitable.

make an angle θ with flow direction. (Fig.), then the time taken to cross the river Q.10. Two bodies were thrown simultaneously from the same point: one, straight up, and the other, at an angle of θ = 60° to the horizontal. The initial velocity of each body is equal to v0  = 25 m/s. Neglecting the air drag, find the distance between the bodies t = 1.70 s later. Ans.

The figure shows the components of the velocities of the two bodies along the horizontal and vertical components. The position of the vertically thrown body after time t will be

where i and j are the unit vectors along the horizontal and vertical directions respectively. The position of the other body at a function of time will be

. Now the distance between the two is simply the Euclidean distance given by,

Q.11. Two particles move in a uniform gravitational field with an acceleration g. At the initial moment, the particles were located at one point and moved with velocities v1 =  3.0 m/s and v2  = 4.0 m/s horizontally in opposite directions. Find the distance between the particles at the moment when their velocity vectors become mutually perpendicular. Ans.

Since, gravity acts vertically downwards, it does not effect the horizontal components of velocities of P1 and P2. However, both P1 and P2 accelerate at equal rates of g downwards from zero initial velocity component downwards.

The velocity of P1 after time t is given by

and that of P2 is given by

When the two velocity vectors are perpendicular to each other, the dot product of the vectors will be null, i.e.

Q.12. Three points are located at the vertices of an equilateral triangle whose side equals a. They all start moving simultaneously with velocity v constant in modulus, with the first point heading continually for the second, the second for the third, and the third for the first. How soon will the points converge? Ans.  From the symmetry of the problem all the three points are always located at the vertices of equilateral triangles of varying side length and finally meet at the centriod of the initial equilateral triangle whose side length is a, in the sought time interval (say t ). 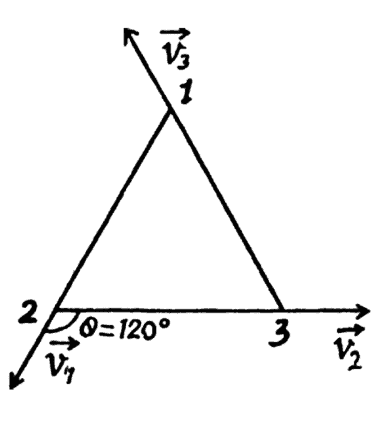 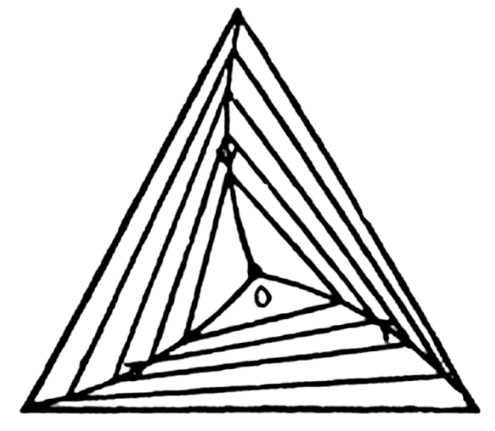 Let us consider an arbitrary equilateral triangle of edge length l (say).Then the rate by which 1 approaches 2, 2 approches 3, and 3 approches 1, becomes: 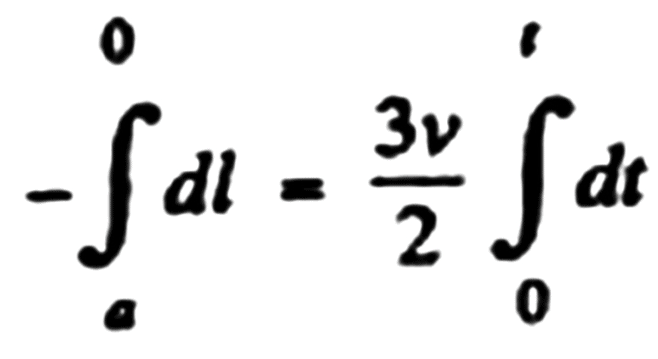 Q.13. Point A moves uniformly with velocity v so that the vector v is continually "aimed" at point B which in its turn moves rectilinearly and uniformly with velocity u< v. At the initial moment of time v ⊥ u  and the points are separated by a distance 1. How soon will the points converge?Ans. Let us locate points A and B at an arbitrary instant of time (Fig.).If A and B are separated by the distance s at this moment, then the points converge or point A approaches B with velocity -ds/dt = v - ucosα where angle α  varies with time.

(where T is the sought time) 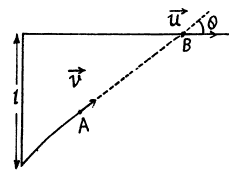 As both A and B cover the same distance in jc-direction during the sought time interval, so the other condition which is required can be obtained by the equation 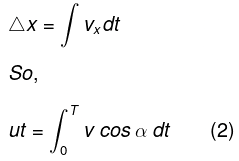 Q.14. A train of length l = 350 m starts moving rectilinearly with constant acceleration w = 3.0.10-2  m/s2; t = 30 s after the start the locomotive headlight is switched on (event 1), and τ = 60 s after that event the tail signal light is switched on (event 2). Find the distance between these events in the reference frames fixed to the train and to the Earth. How and at what constant velocity V relative to the Earth must a certain reference frame K move for the two events to occur in it at the same point?Ans. In the reference frame fixed to the train, the distance between the two events is obviously equal to l. Suppose the train starts moving at time t = 0 in the positive x direction and take the origin (x = 0) at the head-light o f the train at t = 0. Then the coordinate o f first event in the earth’s frame is

and similarly the coordinate of the second event is

The distance between the two events is obviously.

in the reference frame fixed on the earth..

For the two events to occur at the same point in the reference frame K, moving with constant velocity V relative to the earth, the distance travelled by the frame in the time interval T must be equal to the above distance. 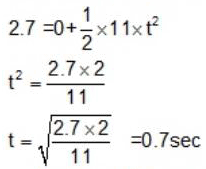 Since the bolt essentially traveled from ceiling to floor, its final displacement was same as the position of the floor. Thus, the bolt displaced about 0.7 m.