The document Kingdom Protista: Chrysophytes and Dinoflagellates Notes | Study Biology Class 11 - NEET is a part of the NEET Course Biology Class 11.
All you need of NEET at this link: NEET

Protists have the following modes of nutrition.

1. Photosynthetic (Holophytic) - In this mode, the organ prepares its food from CO₂ and water by utilizing sunlight with the help of photosynthetic pigments like chlorophyll. The process is called photosynthesis. Examples are Dinoflagellates, Diatoms and Euglenoids.

2. Holozoic or Zootrophic(Ingestive Phagotrophic) - In this mode, the individual captures and ingests the food like animals, found in many protozoans like Amoeba and Paramecium.

3. Saprotrophic or Saprobic - In this mode, the organism releases enzymes into the surroundings where the enzymes convert organic matter into simpler products. These products are then absorbed through the body surface of the organism. Saprobic nutrition is found in slime moulds.

4. Parasitic - Some protists get their food from the body of other organisms. The individual which obtains its food is called a parasite and the organism from which a parasite gets food is called the host. Trypanosoma, Giardia, Entamoeba, Plasmodium are some examples of parasites.

5. Mixotrophic - It is a mixed type in which the organism can perform two kinds of nutrition. For example, in Euglena nutrition is both holophytic and saprobic.

7. Pinocytosis - Soluble organic substances and salts are known to be absorbed in Amoeba and others through pinocytosis.

Most of the free-living protists perform aerobic respiration, however, the parasitic protists and protists living at the bottom of aquatic habitats respire anaerobically.

They reproduce by both asexual and sexual methods.

(a) Asexual Reproduction. It involves only one parent. All the young ones produced asexually have the same genetic constitution as that of the parent and are called clones. Asexual reproduction can occur in the following ways:

(i) Binary fission. It is the division of the parent body into two equal daughter individuals by mitosis. Examples: Amoeba, Euglena and Paramecium.

(ii) Multiple fission. It is the division of the parent organism into several daughter individuals. Examples: Amoeba and Plasmodium.

(iv) Spore formation. In some protists, spores are formed for asexual reproduction.

Spores have some sort of covering to withstand unfavourable conditions. On germination, each spore gives rise to a new individual. Example: Slime moulds.

(v) Budding. In budding a small outgrowth develops from the parent body which separates and develops into a new individual. Example Arcella (a Sarcodine)

The sequence of events between any given phase in one generation and that similar phase in the next succeeding generation constitute a life cycle. Two types of life cycles are found in protists.

The kingdom Protista has been broadly divided into three main groups.

Photosynthesis takes place in these protists. They constitute the main portion of the phytoplankton. The phytoplankton is green photosynthetic organisms that are passively drifted by the water current. They include dinoflagellates, chrysophytes and euglenoids.

A. Habitat and Habits.

(i) The dinoflagellates are an important component of phytoplankton. Most of them are marine but some occur in freshwater. Some dinoflagellates such as Gymnodinium and Gonyaulax grow in large numbers in the sea and make the water look red and cause the so-called "red tide".

(i) Dinoflagellates are basically unicellular motile and biflagellate, golden brown, photosynthetic protists. The predominant colour is golden brown but yellow, green, brown and even blue forms also occur due to change in the proportion of various pigments. A few are nonmotile, non-flagellate, amoeboid, filamentous.

(ii) Cells are generally covered by a rigid coat the theca or lorica of articulated and sculptured plates of cellulose. Periplast may occur instead of the theca. Because of the presence of sculptured plates, these protists are often known as armoured dinoflagellates. (iii) The theca contains two grooves, the longitudinal groove called the sulcus and the circular groove known as the cingulum or annulus or girdle.

(v) The nucleus is larger in size and has been marked as mesokaryon by Dodge (1966). Chromosomes do not have histone or RNA.

(vii) Mucilage bodies or vesicles occur below the cell membrane.

(ix) Varieties of eyespots occur in dinoflagellates. Some of them are like ocelli.

Reserve food is stored in the form of starch and oils.

(i) Asexual reproduction is commonly through cell division. Cysts occur in a number of dinoflagellates.

(ii) Sexual reproduction has been reported in some dinoflagellates (e.g., Ceratium). It is isogamous and anisogamous.

A. Habitat and Habits.

(i) Diatoms occur in all aquatic and moist terrestrial habitats.

(ii) They may be free-floating or bottom dwellers. The free-floating forms remain suspended on the surface of the water by mucilage secretion and the presence of lightweight lipids.

(iii) Diatoms may show gliding type of movement with the help of mucilage.

(iv) The siliceous frustules of diatoms do not decay easily. They pile up at the bottom of water reservoirs and form big heaps called diatomite or diatomaceous earth. It may extend for several hundred metres from where the same can be mined.

(i) The body is covered by a transparent siliceous shell (silica deposited in the cell wall) known as a frustule. The frustule is made of two valves, epitheca and hypotheca. The two valves fit together like a soapbox. The frustule possesses very fine markings, pits, pores and ridges.

(ii) Diatoms are microscopic, variously coloured and of diverse forms protists that do not possess flagella except in the reproductive state.

(iii) They are basically unicellular but can form pseudo-filaments and colonies.

(iv) Depending upon the symmetry, the diatoms are of two types namely, pennate and centric. The pennate diatoms show bilateral symmetry e.g., Navicula and the centric diatoms have radial symmetry, e.g., Melosira.

(vi) Chloroplasts or chromatophores are yellowish-brown to greenish-brown. They contain chlorophyll a and chlorophyll c. 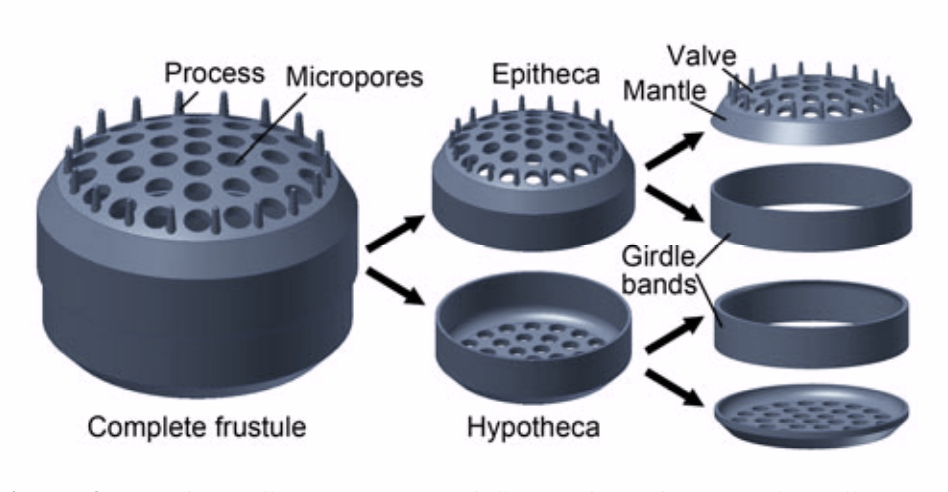 The food is reserved in the form of oils and leucosin (polysaccharides). Volutin globules (proteinaceous in nature) are also present.

(i) The common mode of multiplication is by binary fission.

(ii) Resting spores or statospores are formed in some cases.

(iii) Meiosis. is gametic. Sexual reproduction varies from isogamy to oogamy. In the latter case, male gametes are motile and uniflagellate. Fertilization produces a zygote that grows in size and forms a rejuvenascent cell called auxospore. in that their vegetative cells are typically diploid.

(1) Diatoms are very important photosynthesizers. About half of all the organic matter synthesized in the world is believed to be produced by them. Though microscopic, diatoms are an important source of food to aquatic animals. A 60-tonne blue whale may have 2 tonnes of plankton in the gut which is mostly diatoms.

(2) The oils extracted from some fishes and whales are actually the ones produced by diatoms.

(3) Diatomite deposits are often accompanied by petroleum fields. Much of the petroleum of today is probably due to decayed bodies of the past diatoms.

(4) Diatomite is porous and chemically inert. It is, therefore, used in the filtration of sugar, alcohols oil, syrups and antibiotics.

(5) Diatomite is employed as a cleaning agent in toothpaste and metal polishes.

(6) Diatomite is added to paints for enhancing night visibility.

(7) Diatomite is employed as insulation material in refrigerators, boilers and furnaces.

(9) Diatomite is a good industrial catalyst.

(10) Diatomite is a source of water glass or sodium silicate.

The document Kingdom Protista: Chrysophytes and Dinoflagellates Notes | Study Biology Class 11 - NEET is a part of the NEET Course Biology Class 11.
All you need of NEET at this link: NEET