Question 1: Name the product of petroleum that is used to drive heavy vehicles.

Question 2: Give one example of a good domestic fuel.

Question 3: Name any one hydrocarbon fraction obtained during the fractional distillation of petroleum which is used as a domestic fuel.

Question 4: What are the various fuels which are used to generate electricity in a thermal power plant ?

Question 5: Name any four fractions obtained from petroleum which are used as fuels.

Question 6: What is the composition of liquefied petroleum gas (LPG) ?

Question 7: Which gaseous fuel is being used increasingly in transport vehicles like cars and buses these days ?

Question 9: What is the main constituent of : (i) petroleum gas ? (ii) natural gas ?

Question 10: Name the component which is found in natural gas as well as in biogas.

Question 12: State one important use of CNG these days.

Solution : CNG is used as a fuel in transport vehicles.

Question 14: Explain why, natural gas is considered to be a good fuel.

Solution : Natural gas is considered to be a good fuel because it has a high calorific value, burns with a smokeless flame, causes no air pollution and does not produce any poisonous gas.

Solution : The traditional sources of energy which are familiar to most people are called conventional source of energy.Ex. Wood, coal etc.

Question 16: Explain the principle of working of a thermal power plant. Draw a labelled diagram to illustrate your answer.

Solution : In a thermal power plant, heat produced by burning coal is used to boil water to form steam. The steam, at high temperature and pressure, rotates the turbine and its shaft, which drives the generator to produce electricity. 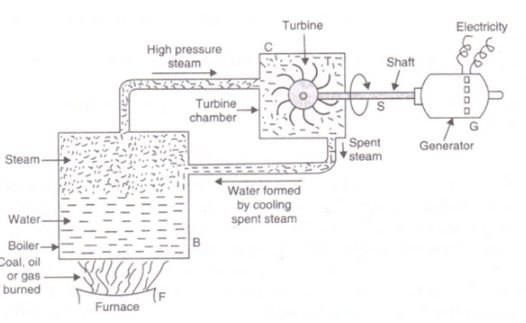 Question 17: What are the disadvantages of burning fossil fuels ?

Question 18: Write a short note on the pollution caused by burning fossil fuels.

Question 19: What are the various steps which can be taken to control (or reduce) pollution caused by burning fossil fuels ?

Solution : Pollution caused by the burning of fossil fuels can be controlled by the increasing the efficiency of combustion process and by using various techniques to reduce the escape of harmful gases and ash into the surrounding air.

Question 20: If you could use any source of energy for heating your food, which one would you use and why ?

Solution : We will use LPG due to its high calorific value and smokeless flame.

Question 21: Why is LPG considered a good fuel ?

Solution : LPG is considered as good fuel because it has a high calorific value gives a smokeless flame.

Question 22: Why is LPG considered a better fuel than coal ?

Solution : LPG is considered as a better fuel than coal because it has a higher calorific value, while burning it does not produce any smoke.

Question 23: Why is the leakage of LPG detected easily although it is odourless ? State the steps to be taken in case its leakage is detected in the kitchen.

Solution : For the detection of leakage, a foul smelling substance called ethyl mercaptan is added to the LPG.In case of LPG leakage in the kitchen, following steps must be taken:1. The door and windows should be opened at once to allow the gas to escape.2. The source of gas leakage should be checked and then set right with the help of a gas mechanic.

Question 37: Fossil fuels are energy rich compounds of an element X which were originally made by the plants with the help of sun’s energy. (a) Name the element X. (b) Name another element which is usually found in combination with X in fossil fuels.

Solution : (a) X = Carbon(b) Another element which is usually found in combination with carbon in fossil fuels is hydrogen.

Question 38: The energy in petrol originally came from the sun. Explain how it got into petrol.

Solution : Petrol is obtained from petroleum, which is a fossil fuel. Fossil fuels were originally made by sun’s energy because it was the sunlight of long ago that made plants and animals grow. So, the energy in petrol originally came from the sun.

Question 40: The pollution of air caused by burning petroleum fuels (like petrol and diesel) in vehicles can be controlled by fitting a device X in the exhaust system of vehicles. (a) Name the device X. (b) How does this device help in controlling air pollution ?

Question 1: A hydro-power plant converts one form of energy into another. Name the two forms of energy.

Question 2: What type of energy is possessed by flowing water ?

Question 3: Flowing water can rotate a turbine. Which type of energy is used up by the turbine ?

Question 5: What should be the minimum wind speed for the satisfactory working of a wind-powered electric generator ?

Question 6: Write one use of wind energy (a) in the past (b) at present.

Solution : Use of wind energy(a) in the past – in flour mills(b) at present – for generating the electricity through wind-powered generators.

Question 7: Why is the copper tube of a solar water heater painted black from outside ?

Question 8: What type of reactions occurring inside the sun produce solar energy ?

Question 9: Name some of the solar energy devices.

Question 10: What type of reflector is used in a box-type solar cooker ?

Question 11: What is the range of temperature which can be achieved in a box-type solar cooker in two to three hours ?

Question 12: Name the device which converts sunlight into electricity.

Question 14: Fill in the following blanks with suitable words : A solar cell converts………. energy into…………. energy.

Question 15: (a) What is the difference between a thermal power plant and a hydro power plant ? (b) Which of the two causes serious air pollution and how ?