What are the Laws of Chemical Combinations?

The combination of different elements to form compounds is governed by certain basic rules. These rules are referred to as laws of chemical combination.

There are five laws of chemical combinations:

1. Law of Conservation of Mass

“The mass in an isolated system can neither be created nor be destroyed but can be transformed from one form to another”. Let us look at an example first-

No. of Carbons, Hydrogens and Oxygens are the same on each side of the equation.

Limitation of Law of Conservation of Mass

Solved Examples of Law of Conservation of Mass

Example 1: A 15.9 gm sample of sodium carbonate is added to a solution of acetic acid weighing 20.0 gm. The two substances react, releasing carbon dioxide gas to the atmosphere. After the reaction, the contents of the reaction vessel weigh 29.3 gm. What is the mass of carbon dioxide given off during the reaction?

Example 2: 5.2 g of CaCO3 when heated produced 1.99 g of Carbon dioxide and the residue (CaO) left behind weighs 3.2 g. Show that these results illustrate the law of conservation of mass.

Question for Laws of Chemical Combinations
Try yourself:A quantity of 10 g of a hydrocarbon exactly requires 40 g oxygen for complete combustion. The products formed are CO2 and water. When CO2 gas formed is absorbed completely in lime water, the mass of solution increases by 27.5 g. What is the mass of water formed simultaneously in the combustion?
Explanation

"All chemical compounds are found to have constant composition irrespective of their method of preparation or sources."

The elements are always combined in the same proportions by mass.

Limitations of Law of Definite Proportions

Example 2: 6.488 g of lead combine directly with 1.002 g of oxygen to form lead peroxide PbO2. Lead peroxide is also produced by heating lead nitrate and it was found that the percentage of oxygen present in lead peroxide is 13.38 percent. Use these data to illustrate the law of constant composition.

Question for Laws of Chemical Combinations
Try yourself:Two gaseous samples were analyzed. One contained 1.2 g of carbon and 3.2 g of oxygen. The other contained 27.3% carbon and 72.7% oxygen. The experimental data are in accordance with
Explanation 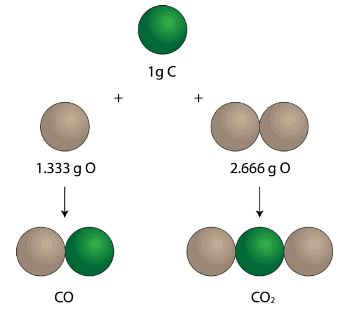 In the first oxide:

Limitations of Law of Multiple Proportions

Example 2: Carbon is found to form two oxides, which contain 42.9% and 27.3% of carbon respectively. Show that these figures illustrate the law of multiple proportions.

To calculate the weights of carbon which combine with a fixed weight i.e., one part by weight of oxygen in each of the two oxides.

Since this is a simple whole-number ratio, so the above data illustrate the law of multiple proportions.

Question for Laws of Chemical Combinations
Try yourself:Two elements A and B combine to form compound X and Y. For the fi xed mass of A, masses of B combined for the compounds X and Y are in 3:7 ratio. If in compound X, 4 g of A combines with 12 g B, then in compound Y, 8 g of A will combine with ...... g of B.
Explanation

The pressure exerted by a gas (of a given mass and kept at a constant volume) varies directly with the absolute temperature of the gas.

P is the pressure exerted by the gas

T is the absolute temperature of the gas

k is a constant.

The relation between pressure and absolute temperature can be illustrated graphically. 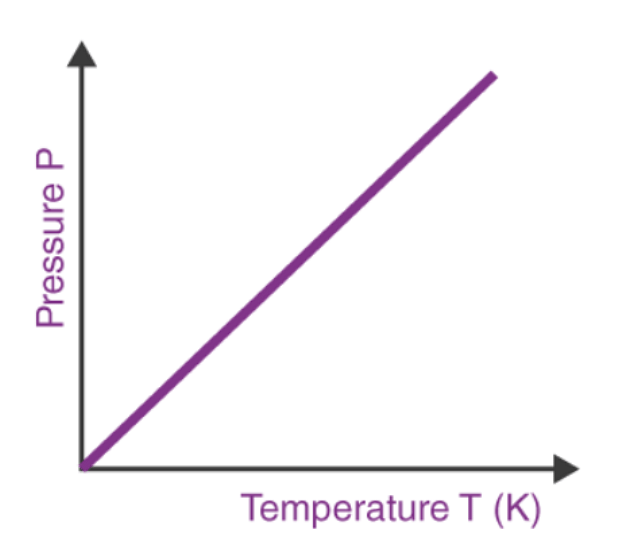 Example 1: 2.5 ml of a gaseous hydrocarbon exactly requires 12.5 ml oxygen for complete combustion and produces 7.5 ml carbon dioxide and 10.0ml water vapour. All the volumes are measured at the same pressure and temperature. Show that the data illustrates Gay Lussac's law of volume combination.

Hence, the data is according to the law of volume combination.

Example 2: How much volume of oxygen will be required for the complete combustion of 40 ml of acetylene (C2H2) and how much volume of carbon dioxide will be formed? All volumes are measured at NTP.

So, for complete combustion of 40 ml of acetylene, 100 ml of oxygen is required and 80 ml of CO2 is formed.

"Equal volumes of gases at the same temperature and pressure should contain an equal number of molecules." 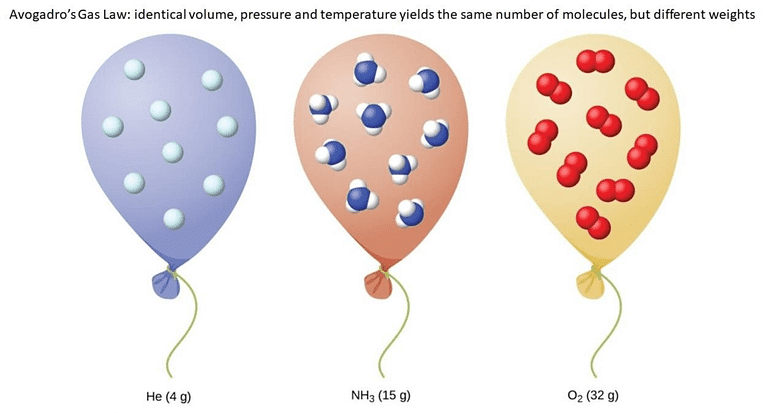 Examples 1: A tyre that consists of 10 moles air and occupies 40L volume loses half of the volume because of a puncture. What is the amount of air left in the deflated tyre at STP?

According to Avogadro’s law,

the amount of air left in the deflated tyre,

Question for Laws of Chemical Combinations
Try yourself:The percentage of copper and oxygen in samples of CuO obtained by different methods was found to be the same. This illustrates the law of:
Explanation

The percentage of copper and oxygen in a CuO sample obtained from different methods was found to be the same. This proves the law of Constant proportion as the ratio of Cu:O remains constant.

Q1. What mass of silver nitrate will react with 5.85 g of sodium chloride to produce 14.35 g of silver chloride and 8.5 g of sodium nitrate, if the law of conservation of mass is true?

Ans: According to the law of multiple proportions, "If two elements form more than one compound between them, then the ratios of the masses of the second element which combine with a fixed mass of the first element will be ratios of small whole numbers".