Heat given to a thermodynamic system (ΔQ) is partially utilized in doing work (ΔW) against the surrounding and the remaining part increases the internal energy (ΔU) of the system.

First law of thermodynamics is a restatement of the principle conservation of energy.

In an isothermal process, change in internal energy is zero (ΔU = 0).

In an adiabatic process, no exchange of heat takes place, i.e., Δθ = O.

In an adiabatic process, if gas expands, its internal energy and hence, temperature decreases and vice-versa.

A process taking place in a thermodynamic system at constant temperature is called an isothermal process.

These process follows Boyle’s law, according to which

From first law of thermodynamics, dQ = dW, i.e., heat given to the system is equal to the work done by system surroundings.

After differentiating P V = constant, we have

P – V curve for this persons is a rectangular hyperbola

(a) Melting process is an isothermal change, because temperature of a substance remains constant during melting.

(b) Boiling process is also an isothermal operation.

A process taking place in a thermodynamic system for which there is no exchange of heat between the system and its surroundings.

These process follows Poisson’s law, according to which

Work done in an adiabatic process is

where Ti and Tf are initial and final temperatures. Examples

(a) Sudden compression or expansion of a gas in a container with perfectly non-conducting wall.

(b) Sudden bursting of the tube of a bicycle tyre.

(c) Propagation of sound waves in air and other gases.

A process taking place in a thermodynamic system at constant pressure is called an isobaric process.

Molar heat capacity of the process is Cp and dQ = nCpdT.

A process taking place in a thermodynamics system at constant volume is called an isochoric process.

When a thermodynamic system returns to the initial state after passing through several states, then it is called cyclic process.Efficiency of the cycle is given by

Work done by the cycle can be computed from area enclosed cycle on p- V curve.Isothermal and Adiabatic Curves

The graph drawn between the pressure p and the volume V of a given mass of a gas for an isothermal process is called isothermal curve and for an adiabatic process it is called adiabatic curve .

The slope of the adiabatic curve

= γ x the slope of the isothermal curve

There are two types of volume elasticities of gases:

Ratio between isothermal and adiabatic modulus

It is impossible to obtain a continuous supply of work from a body by cooling it to a temperature below the coldest of its surroundings.

It is impossible to construct a heat engine that will convert heat completely into work.

All these statements are equivalent as one can be obtained from the other.

Entropy is a physical quantity that remains constant during a reversible adiabatic change.

Change in entropy is given by dS = δQ / T

Where, δQ = heat supplied to the system

Entropy of a system increases in an irreversible process 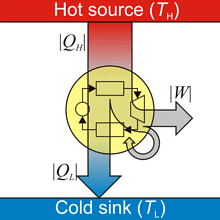 (i) Source of heat at higher temperature

Thermal efficiency of a heat engine is given by

where Q1 is heat absorbed from the source,

Q2 is heat rejected to the sink and T1 and T2 are temperatures of source and sink.

Heat engine are of two types:

(i) External Combustion Engine: In this engine fuel is burnt a chamber outside the main body of the engine. e.g., steam engine. In practical life thermal efficiency of a steam engine varies from 12% to 16%.

(ii) Internal Combustion Engine: In this engine, fuel is burnt inside the main body of the engine. e.g., petrol and diesel engine. In practical life thermal efficiency of a petrol engine is 26% and a diesel engine is 40%.

The document Laws of Thermodynamics & Heat Engine Notes | Study Physics For JEE - JEE is a part of the JEE Course Physics For JEE.
All you need of JEE at this link: JEE
Join Course