The Constitution lays down the following qualifications for a person to be chosen as a member of the Parliament:

In the following cases, a member of Parliament vacates his seat:

Bharatiya Janata Party's (BJP) MP Om Birla was unanimously elected as the Speaker of the 17th Lok Sabha on 19th June 2019. Since the Indian System of Government follows the Westminster Model, the Parliamentary proceedings of the country are headed by a presiding officer, who is called the Speaker. 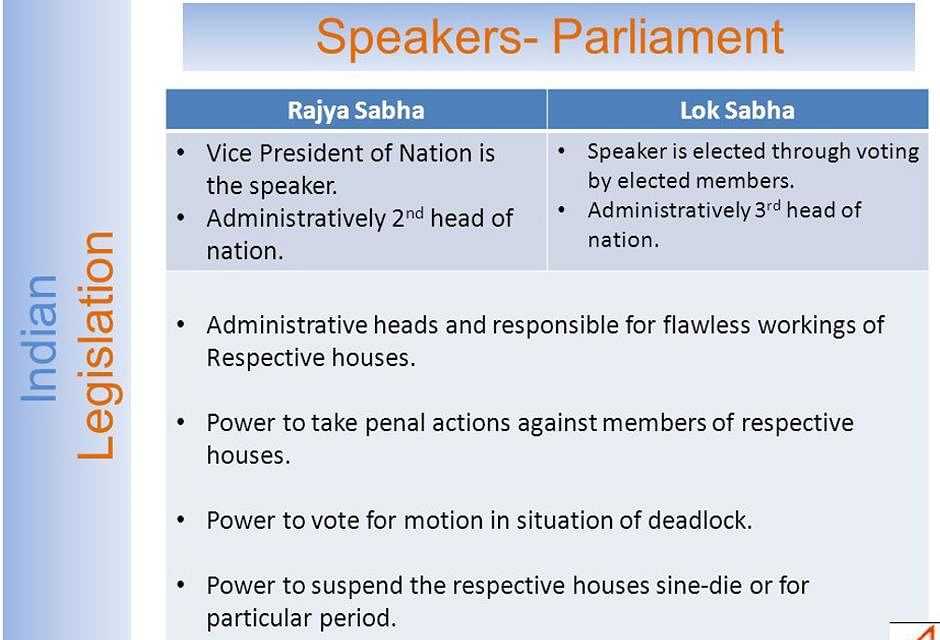 (i) Speaker of the Lok Sabha

(ii) Election of the Speaker

(iii) Removal of the Speaker

6. Panel of Chairpersons of Lok Sabha

Under the Rules of Lok Sabha, the Speaker nominates from amongst the members a panel of not more than ten chairpersons. Any of them can preside over the House in the absence of the Speaker or the Deputy Speaker. He has the same powers as the Speaker when so presiding.

10. Panel of Vice-Chairpersons of Rajya Sabha

Each House of Parliament has separate secretarial staff of its own, though there can be some posts common to both the Houses. Their recruitment and service conditions are regulated by Parliament. The secretariat of each House is headed by a secretary-general. He is a permanent officer.

The Parliament should meet at least twice a year.There are usually three sessions in a year:

(i) The Budget Session (February to May)

The legislative procedure is identical in both the Houses of Parliament. Every bill has to pass through the same stages in each House. A bill is a proposal for legislation and it becomes an act or law when duly enacted.

Bills introduced in the Parliament are of two kinds:

Though both are governed by the same general procedure and pass through the same stages in the House.

The bills introduced in the Parliament can also be classified into four categories:

Every ordinary bill has to pass through the following five stages in the Parliament before it finds a place on the Statute Book:

(i)  First Reading: An ordinary bill can be introduced in either House of Parliament. Such a bill can be introduced either by a minister or by any other member. The member who wants to introduce the bill has to ask for the leave of the House. No discussion on the bill takes place at this stage. Later, the bill is published in the Gazette of India.

(ii) Second Reading: During this stage, the bill receives not only the general but also the detailed scrutiny and assumes its final shape. In fact, this stage involves three more sub-stages, namely, stage of general discussion, committee stage and consideration stage.

(iii) Third Reading: At this stage, the debate is confined to the acceptance or rejection of the bill as a whole and no amendments are allowed, If the majority of members present and voting accept the bill, the bill is regarded as passed by the House.

(v) Assent of the President: Every bill after being passed by both Houses of Parliament either singly or at a joint sitting, is presented to the president for his assent.There are three alternatives before the president:

Article 110 of the Constitution deals with the definition of money bills.

Financial bills are those bills that deal with fiscal matters, that is, revenue or expenditure. However, the Constitution uses the term financial bill in a technical sense.

The Constitution of India provides for a joint session of the Parliament.

➢ Joint Sitting of Parliament is Summoned by

Article 108 of the Indian Constitution provides for a joint sitting of both Houses of Parliament. Accordingly, a joint session can be summoned when: If after a bill is passed by one House and transmitted to the other House.(i) The other House rejects this bill.(ii) The Houses do not agree on the amendments made to the bill.(iii) More than six months elapse with the bill being received by the other House without it being passed.Then, the President can summon a joint sitting unless the bill had elapsed because of the Lok Sabha's dissolution

How is the period of the above-mentioned 6 months calculated: Those days are not taken into account when the House is prorogued or adjourned for over 4 consecutive days.

According to Article 87 of the Constitution, there are two instances when the country's President specifically addresses a joint sitting of both Houses.

Powers of an MLA

The powers and functions of the Members of the Legislative Assembly can be categorised under the following heads: 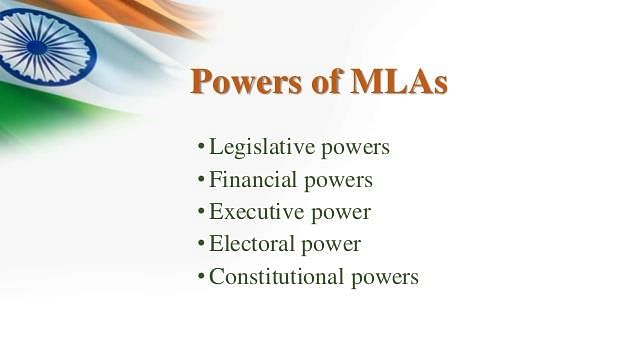 3. Executive PowersThe Members of the Legislative Assembly control the activities and actions taken by the Chief Minister and the Council of Ministers.

4. Electoral PowersThe Members of the Legislative Assembly have certain electoral powers such as the following:

5. Constituent and Miscellaneous Powers(i) Some parts of the Constitution of India that relate to federal provisions can be amended by ratification by one-half of the Members of the Legislative Assembly.(ii) MLAs review reports of the Public Service Commission and the Accountant General.(iii) MLAs appoint the various Committees to the House.

The functions of the Parliament are mentioned in the Indian Constitution in Chapter II of Part V.

The functions of the Parliament can be classified under several heads. They are discussed below: 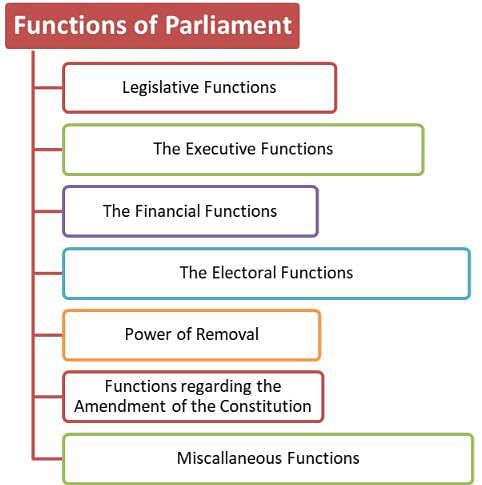 2. Executive Functions (Control over the Executive)

5. Electoral FunctionsThe Parliament takes part in the election of the President and the Vice President. The electoral college that elects the President comprises of, among others, the elected members of both Houses. The President can be removed by a resolution passed by the Rajya Sabha agreed to by the Lok Sabha.

6. Judicial Functions In case of breach of privilege by members of the House, the Parliament has punitive powers to punish them. A breach of privilege is when there is an infringement of any of the privileges enjoyed by the MPs.(i) In the parliamentary system, legislative privileges are immune to judicial control.(ii) The power of the Parliament to punish its members is also generally not subject to judicial review.(iii) Other judicial functions of the Parliament include the power to impeach the President, the Vice President, the judges of the Supreme Court, High Courts, Auditor-General, etc.

➢ Other powers/functions of the Parliament

The Constitutional position of the Rajya Sabha (as compared with the Lok Sabha) can be studied from three angles:

1. Equal Status with Lok Sabha In the following matters, the powers and status of the Rajya Sabha are equal to that of the Lok Sabha:

2. Unequal Status with Lok SabhaIn the following matters, the powers and status of the Rajya Sabha are unequal to that of the Lok Sabha:

3. Special Powers of Rajya SabhaDue to its federal character, the Rajya Sabha has been given two exclusive or special powers that are not enjoyed by the Lok Sabha: