High Court:Court above the Circuit Court with full jurisdiction to decide all matters of law and fact. High Court judges – male and female – are normally addressed as “My Lord”.In pari delicto:(Latin: equally at fault) If two parties are equally to blame for a situation (such as both failing to comply with the terms of a contract), a court could refuse to provide a remedy to either of them because they are in pari delicto.In personam: (Latin: against the person) All legal rights are either in personam or in rem. An in personam right attaches to a particular person.In rem:(Latin: against the thing) In rem rights relate to property and are not based on any personal relationship.Incorporeal:Intangible legal rights, such as copyrights or patents.Injunction:Court order that forbids a party to do something (prohibitory injunction) or compels him to do something (mandatory injunction). It may be enforced by committal to prison for contempt.Insolvent:Person not able to pay his debts as they become due. Insolvency is a prerequisite for bankruptcy.Inter alia:(Latin: among other things) Used to precede a list of examples covered by a more general descriptive statement.Interim order:Temporary court order of very limited duration, usually until the court has heard the full facts of a case.Interlineation:Addition to a document after it has been signed. Such additions are disregarded unless they are initialized by the signatories and, if necessary, witnessed.Interlocutory injunction:An injunction which lasts only until the end of the trial during which the order was sought, when it may be replaced by a permanent injunction.Inter partes:Latin: between the parties.Inter vivos:(Latin: between living persons) An inter vivos trust is set up to take effect while the settlor is still alive (as opposed to a testamentary trust, which takes effect only on the settlor’s death).Intestate:Person who dies without making a valid will.Invitation to treat:An offer to receive an offer. Goods advertised by a shopkeeper are open to offers from customers. If goods are mistakenly marked with the wrong price, the retailer is not bound to accept that price because he has not offered the goods at that price: he has invited members of the public to make him an offer which he is entitled to accept or reject. A retailer who deliberately or consistently mispriced goods, however, may be committing an offence under the Consumer Information Act.IOU:A written confirmation of a debt, signed by the debtor, which implies an undertaking to pay the sum owed at some future date. An IOU is not a negotiable instrument and may not be passed on to a third party.Joint and several liability:Liability of more than one person, under which each may be sued for the entire amount of damages due by all. The obligation may arise by agreement or may be imposed by law. 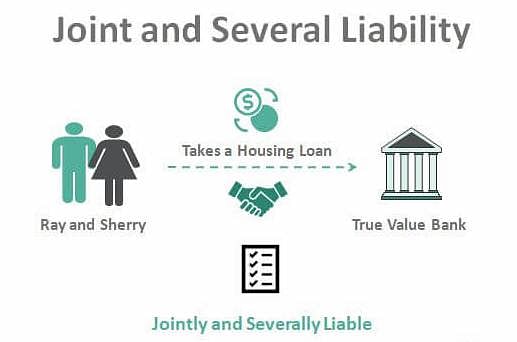 Example of Joint and Several Liability