The document Local Self Government - Revision Notes UPSC Notes | EduRev is a part of the UPSC Course Indian Polity for UPSC (Civil Services) Prelims.
All you need of UPSC at this link: UPSC

The 73rd and 74th constitutional amendment acts (included in 11th schedule), 1992 have inserted Parts IX and IX-A in the Constitution dealing with local government.

The Panchayati Raj system was initiated with the pious objectives of "democratic decentralisation and promoting local participation in government policy formulation". (i) To provide a broad base to democracy in the country by transferring the powers from the centre and States through districts and blocks to the villages;(ii) To enable the people to participate in democracy in a more effective way and thereby to provide much needed training ground for future leadership in the country;(iii) To provide the rural people with an opportunity to plan and administer their own affairs;(iv) to imbibe plan consciousness among the lowest strata;(v) To develop community feeling and self-reliance among people of the villages; and

(vi) To bring Central and State ministries and the District Development Departments into the rural affairs.

The problem of democratic decentralisation was felt immediately after independence. To realise the objective, the Community Development Programme was launched in 1952 with a view to carry out integrated rural development work. Under the programme, the administrative setup was reorganised to initiate and coordinate the rapid all round development of villages.

A number of Community Development blocks were created all over the country. The administrative personnel in each of them consisted of the Block Development Officer (BDO), the Extension Officers (EO) and village level workers. Block Advisory Committee, comprising non-official members to help the bureaucracy was also created. In short the block was treated as the quit of planning and development work.

These two programmes failed to yield satisfactory services. Meanwhile, the Second plan  recommended the restructuring of local government and development of administration at the district levels, with village  panchayats linked to higher tiers.

The report of the Balwantrai Mehta Committee, constituted in 1956, rested more on practical considerations. In its chapter entitled 'Democratic Decentralisation' it maintained that the executive machinery, through which a modern democracy is to function, cannot adequately appreciate local needs and circumstances unless there is devolution of power down to the lowest level. The Government of India concurred with the recommendation of the committee for the establishment of a three tier structure of Panchayati Raj. This involved genuine transfer of power and responsibility in planning and implementation of the development programme.

The recommendation of the committee came into effect on 1 April 1958. Panchayati Raj was introduced in various States, though in different patterns. Rajasthan and A.P. were the first to introduce the three tier system of Panchayati Raj as envisaged in the Mehta Report.Panchayati Raj

Fig: Picture representing Panchayati Raj system in India Part IX of the constitution, inserted by 73rd Amendment Act, 1992, containing Arts. 243 to 243-O relates to the Panchayats. By April 1994, all states has passed the necessary legislation to implement the Act as required.

The Act provides for three-tier system of Panchayats, namely,

(i) The village level, (Gram Panchayat);

(ii) The District Panchayat (Zila Parishad) at the district level and

(iii) The Intermediate Panchayat (Panchayat Samiti) which stands between the village and district Panchayats in States where the population is above 20 lakhs.

Art. 243B provides that all the seats in a Panchayat shall be filled by persons chosen by direct election from territorial constituencies in the Panchayat area. The electorate is called ‘Gram Sabha’ consisting of persons registered in the electoral rolls relating to a village comprised within the area of a Panchayat. Thus representative democracy is introduced at the grass roots.

The Chairperson of each Panchayat shall be elected according to the law passed by a State and such State law shall also provide for the representation of Chairpersons of Village and Intermediate Panchayats in the District Panchayat, as well as members of the Union and State Legislature in the Panchayats above the village level.

Article 243D provides for reservation of seats for Scheduled Castes and Scheduled Tribes. The reservation shall be in proportion to their population. Out of the seats so reserved not less than 1/3rd of the seats shall be reserved for women belonging to Scheduled Castes and Scheduled Tribes, respectively. Not less 1/3rd of the total number of seats to be filled by direct elections in every Panchayat shall be reserved for women.

These reservations for the Scheduled Castes and Tribes shall cease to be operative when the period specified in Art. 334 (it was 50 years, i.e., upto 2000 A.D.) comes to an end.

Every Panchayat shall continue for 5 years from the date of its first meeting. But it can be dissolved earlier in accordance with the procedure prescribed by state law. Elections must take place before the expiry of the above period. In case it is dissolved earlier, then the elections must take place within six months of its dissolution. A Panchayat reconstituted after premature dissolution (i.e. before the expiry of the full period of 5 years) shall continue only for the remainder of the period. But if the remainder of the period is less than 6 months it shall not be necessary to hold elections.

State Legislatures have the power to confer on the Panchayats such powers and authority as may be necessary to enable them to function as institutions of self-government [Acts. 243G-243H]. Their responsibilities may include:

(i) preparing plans for economic development and justice,

(ii) implementation of schemes for economic development and social justice, and

A State may by law authorise a Panchayat to levy, collect and appropriate taxes, duties, tolls etc. and can also assign to a Panchayat various taxes, duties etc. collected by the State Government. Grants-in-aid may be given to the Panchayats from the Consolidated Fund of the State.

Within one year from 25th April 1993, i.e. the date on which the Constitution 73rd Amendment came into force and afterwards every 5 years the State Government shall appoint a Finance Commission to review the financial position of the Panchayats and to make recommendations as to :

The report of the Commission together with a memorandum of action taken on it, shall be laid before the State Legislature. These provisions are modelled on Art. 280 which contains provisions regarding appointment of a Finance Commission for distribution of finances between the Union and the States.

Article 243K is designed to ensure free and fair elections to the Panchayats.

As under Art. 329, courts shall have no jurisdiction to examine the validity of a law, relating to delimitation of constituencies or the allotments of seats, made under Art. 243K. An election to a Panchayat can be called in question only by an election petition which should be presented to such authority and in such manner as may be prescribed by or under any law made by the State Legislature.Municipalities 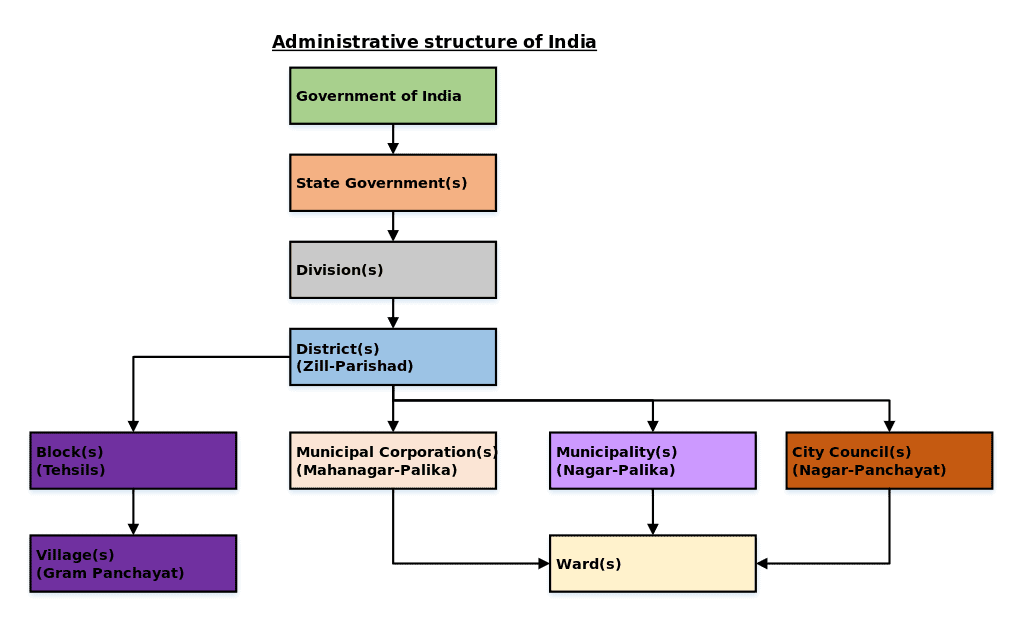 Fig: Administrative structure of IndiaPart IX-A of the Constitution (which has come into force on 1 June 1993), introduced by 74th Constitutional Amendment Act, 1992, and containing Arts. 243 P to 243 ZG relates to the local self-government unit in urban areas. In fact such institutions are in existence all over the country. Part IX-A relates to :

Institutions of self-government, called “municipalities” are of three types :

(i) Nagar Panchayat, for a transitional area, i.e. an area which is being transformed from a rural area to an urban area;

(ii) Municipal Council for a smaller urban area; and

Article 243Q makes it obligatory for every State to constitute such units. But if there is an urban area or part of it where municipal services are being provided or proposed to be provided by an industrial establishment in that area then considering also the size of the area and other factors the Governor may specify it to be an industrial township. For such an area it is not mandatory to constitute a Municipality.

The members of a municipality are generally elected by direct election. The legislature of a State may by law provide for representation in a municipality of :

(i) Persons having special knowledge or experience in municipal administration;

The Chairperson shall be elected in the manner provided by the Legislature.

For one or more wards comprised within the territorial area of a municipality having a population of 3 lakhs or more it would be obligatory to constitute Ward Committees. The State Legislature shall make provision with respect to its composition, territorial area and the manner in which the seats in a ward committee shall be filled. It is open for the State Legislature to constitute Committees in addition to the wards committees.

Legislatures of States have been conferred the power [Art. 243W] to confer on the Municipalities all such powers and authority as may be necessary to enable them to function as institutions of self government. They may be given the responsibility of :

(i) preparation of plans for economic development and social justice,

(ii) implementation of schemes as may be entrusted to them and

The State Election Commission appointed under Art. 243K shall have the power of superintendence, direction and control of : (i) the preparation of electoral rolls for, and (ii) the conduct of all elections to the Municipalities. State Legislatures have been vested with necessary power to regulate by law all matters relating to elections to municipalities.

The courts shall have no jurisdiction to examine the validity of law, relating to delimitation of constitu-encies or the allotment of seats made under Art. 243ZA. An election to a Municipality can be called in question only by an election petition which should be presented to such authority and in such manner as may be prescribed by or under any law made by the State Legislature.

Apart from giving constitutional recognition to Municipalities the 74th Amendment lays down that in every State two committees shall be constituted.

But it has been laid down that:

(i) In case of the District Planning Committee at least 4/5th of the members shall be elected by the elected members of the district level, Panchayat and of the Municipalities in the district from amongst themselves. Their proportion would be in accordance with the ratio of urban and rural population of the district.(ii) In case of Metropolitan Planning Committee at least 2/3rd of the members of the committee shall be elected by the Members of the Municipalities and Chairpersons of the Panchayats in the Metropolitan area from amongst themselves. The proportion of seats to be shared by them would be based on the ratio of the population of the Municipalities and of the Panchayats in the area.

The State Legislature would by law make provision with respect to :

(i) the functions relating to district planning that may be assigned to the district committees, and (ii) the manner in which the Chairperson of a district committee may be chosen. The Committee shall prepare and forward the development plan to the State Government. In regard to the Metropolitan Planning Committee which is to prepare a development plant for the whole Metropolitan area the State Legislature may by law make provision for:

(i) the representation of the Central and State governments and of such organisations and institutions as may be deemed necessary,(ii) the functions relating to planning and coordination for the Metropolitan area,(iii) the manner in which the Chairpersons of such committees shall be chosen. The development plan shall be forwarded to the State Government.