The document MCQ(Solved) - Solid State, Class 12, Chemistry | EduRev Notes is a part of the JEE Course Chemistry for JEE.
All you need of JEE at this link: JEE

Example 1. Select right statement(s):(a) 8 Cs ions occupy the second nearest neighbour locations of a Cs ion.(b) Each sphere is surrounded by six voids in a two-dimensional hexagonal close-packed layer.(c) If the radius of cations and anions are 0.3 Å and 0.4 Å then a coordinate the number of cation of the crystal is 6. (d) In AgCl, the silver ion is displaced from its lattice position to an interstitial position such a defect is called a Frenkel defect. Ans. (d)Explanation:(a) 6 Cs  ion second nearest neighbour 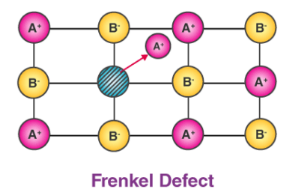 Example 3. Which of the following statements are correct?(a) The coordination number of each type of ion in CsCl is 8.(b) A metal that crystallizes in BCC structure has a coordination number 12.(c) A unit cell of an ionic crystal shares some of its ions with other unit cells.(d) The length of the unit cell in NaCl is 552 pm.

Formula = ABExample 5. A compound alloy of gold and copper crystallizes in a cubic lattice in which gold occupies that lattice point at corners of the cube and copper atom occupy the centres of each of the cube faces. What is the formula of this compound?Ans.

Example 6. A cubic solid is made by atoms A forming a close pack arrangement, B occupying one. Fourth of tetrahedral void and C occupying half of the octahedral voids. What is the formula of the compound?Ans.A = 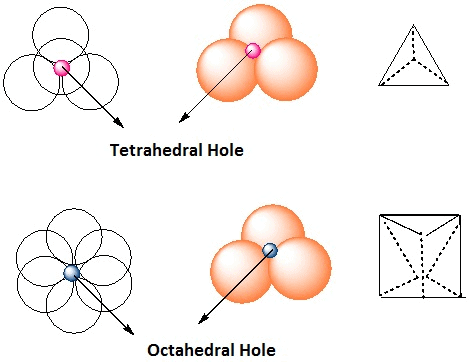 Example 7. What is the percent by mass of titanium in rutile, a mineral that contains Titanium and oxygen, if the structure can be described as a closet packed array of oxide ions, with titanium in one-half of the octahedral holes? What is the oxidation number of titanium?

Example 9. Iron occurs as bcc as well as fcc unit cell. If the effective radius of an atom of iron is 124 pm. Compute the density of iron in both these structures. 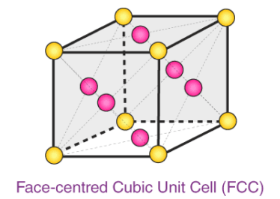 Example 10. A closed packed structure of uniform spheres has an edge length of 534 pm. Calculate the radius of the sphere, if it exists in (a) Simple Cubic Lattice (b) BCC lattice (c) FCC lattice

Example 14. AgCl has the same structure as that of NaCl. The edge length of unit cell of AgCl is found to be 555 pm and the density of AgCl is 5.561 g cm-3. Find the percentage of sites that are unoccupied.Ans.

Example 18. Gold crystallizes in a face-centred cubic lattice. If the length of the edge of the unit cell is 407 pm, calculate the density of the gold as well as its atomic radius assuming it to be spherical. The atomic mass of gold = 197 amu.Ans. FCC : Z = 4

Example 22. A crystal of lead (II) sulphide has a NaCl structure. In this crystal, the shortest distance between Pb2 ion and S2- ion is 297 pm. What is the length of the edge of the unit cell in lead sulphide? Also, calculate the unit cell volume. Ans. NaCl type FCC structure,⇒ r+/r- =

Example 23. If the length of the body diagonal for CsCl which crystallizes into a cubic structure with Cl- ions at the corners and Cs ions at the centre of the unit cells is 7 Å and the radius of the Cs ion is 1.69 Å, what is the radii of Cl- ion?Ans.

Example 24. In a cubic closed packed structure of mixed oxides the lattice is made up of oxide ions, one-eighth of tetrahedral voids are occupied by divalent ions (A2) while one-half of the octahedral voids occupied trivalent ions (B3). What is the formula of the oxide?

Example 25. A solid A  and B- has a NaCl type closed packed structure. If the anion has a radius of 250 pm, what should be the ideal radius of the cation? Can a cation C  having a radius of 180 pm be slipped into the tetrahedral site of the crystal of A B-? Give reasons for your answer.Ans.

∴ No, a cation can't be slipped into a tetrahedral site of crystal

Example 27. In a cubic crystal of CsCl (density = 3.97 gm/cm3) the eight corners are occupied by Cl- ions with Cs ions at the centre. Calculate the distance between the neighbouring Cs and Cl- ions.Ans. 3.94 =

Example 32. BaTiO3 crystallizes in the perovskite structure. This structure may be described as a cubic lattice with barium ions occupying the corner of the unit cell, oxide ions occupying the face-centres and titanium ion occupying the centre of the unit cell. (a) If titanium is described as occupying holes in BaO lattice, what type of holes does it occupy? (b) What fraction of this type of hole does it occupy?Ans. (a) Ti is present at the body centre i.e. it occupies octahedral hole.(b) No. of octahedral in c.c.p. = 4

Example 33. Rbl crystallizes in BCC structure in which each Rb is surrounded by eight iodide ions each of radius 2.17 Å. Find the length of one side of the RbI unit cell.

Example 34. Find the size of the largest sphere that will fit in an octahedral void in an ideal FCC crystal as a function of atomic radius 'r'. The insertion of this sphere into the void does not distort the FCC lattice. Calculate the packing fraction of FCC lattice when all the octahedral voids are filled by this sphere.Ans. If the Radius of the sphere is r, then the radius of the largest sphere that will fit in the octahedral void is 0.414 r.2[r + 0.414 r] = a ⇒ 2.828 r = aVolume of spheres = 4 × pr3 4 × p(0.414r)3 =

Example 36. Metallic gold crystallizes in fcc lattice. The length of the cubic unit cell is a = 4.07 Å.(a) What is the closest distance between gold atoms. (b) How many "nearest neighbours" does each gold atom have at the distance calculated in (a). (c) What is the density of gold?(d) Prove that the packing fraction of gold is 0.74.Ans. a = 4.07 Å

Example 37. Graphite is an example of:(a) Ionic solid (b) Covalent Solid (c) Vander Waal's Crystal (d) Metallic crystalAns. (b)Explanation: Graphite is a covalent solid having sp2 hybridised carbon atoms.Example 38. Which is amorphous solid:(a) Rubber (b) Plastic (c) Glass (d) AllAns. (d)Explanation: Amorphous solids neither have ordered arrangement (i.e. no definite shape) nor have a sharp melting point like crystals, but when heated, they become pliable until they assume the properties usually related to liquid. It is therefore they are regarded as supercooled liquids.

Example 40. The edge length of the cube is 400 PM. Its body diagonal would be:

Example 41. What is the simplest formula of a solid whose cubic unit cell has atom A at each corner, the atom B at each face centre and a C atom at the body centre:

Hence, the formula of the solid is AB3C.

Example 42. A compound alloy of gold and copper crystallizes in a cube lattice in which the gold atoms occupy the corners of a cube and the copper atoms occupy the centres of each of the cube faces.The formula of this compound is-

Explanation: One-eighth of each corner atom (Au) and one-half of each face-centred atom (Cu) are contained within the unit cell of the compound.

Explanation: We know that: ρ =

Example 45. The unit cell of a metallic element of atomic mass 108 and density 10.5 g/cm3 is a cube with an edge length of 409 PM. The structure of the crystal lattice is -

Example 46. Among the following types of voids, which one is the largest void-

i.e the close packing is maximum is fcc.

Explanation: Bragg's equation: nl = 2d sin qExample 49. Copper metal has a face-centred cubic structure with the unit cell length equal to 0.361 nm. Picturing copper ions in contact along the face diagonal, The apparent radius of a copper ion is:

Explanation: The number of atoms present in sc, fcc and bcc unit cells are 1, 4, 2 respectively.