Class 10 : Magnification and Power of a Lens Class 10 Notes | EduRev

The document Magnification and Power of a Lens Class 10 Notes | EduRev is a part of the Class 10 Course Science Class 10.
All you need of Class 10 at this link: Class 10

LensesA lens is a piece of any transparent material bounded by two curved surfaces or by one curved and one plane surface. Lens are of two types :

(i) Convex or convergent lens: Optical Centre : O is a point for a given lens through which any ray passes undeviated.

Principal Axis : C1 C2  is a line passing through optical centre and perpendicular to the lens.

Principal Focus : A lens has two surfaces and hence two focal points. First focal point is an object point on the principal axis for which image is formed at infinity.

While second focal point is an image point on the principal axis for which object lies at infinity. 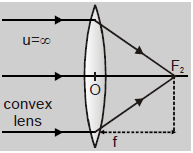 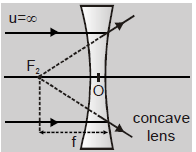 Focal Length f is defined as the distance between optical centre of a lens and the point where the parallel beam of light converges or appears to converge.

Aperture : In reference to a lens, aperture means the effective diameter. Intensity of image formed by a lens which depends on the light passing through the lens will depend on the square of aperture, i.e., I µ (Aperture)2

For Convergent or Convex Lens:

(i) Object is placed at infinity. 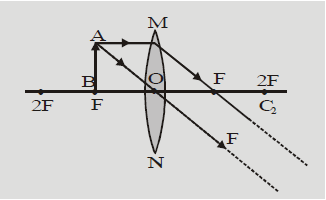 Image : virtual (in front of lens)

Imge is virtual, diminished, erect, towards the object, m = +ve

(i) Object is placed at infinity. 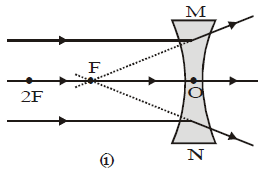 Image : between F and optical centre

Formula of lens : Focal length of a lens can be find out by the following formula:

v = Distance of image from pole

u = Distance of object from pole.

Uses of this formula:

(i) Put the correct signs of known variables according to the sign conventions.

(ii) Do not put the sign of unknown variable. The sign will automatically show up during calculations.

(iii) If the calculated sign of a variable turns out positive, then the variable calculated is on the other side of the lens, i.e., on the opposite side to the object. However if calculated variable is of negative sign, then it is on the same side as the object.

Two thin lens are placed in contact to each other:

Two thin lens are placed in at a small distance d.

Power of lens : The power of a lens is defined as reciprocal of focal length of the lens. Focal length should always be measured in meters.

Unit of power of lens is 1/meter which is called dioptre.

Focal length of a lens depends on following factors :-

(i) Refractive index of the material of the lens.

(ii) Radius of curvature R1 and R2 of both in curved surfaces of the lens.

Formula of making a spherical lens of specific focal length.

Where f is the average value of focal length for all the colours. µ is the refractive index of the material of the lens with respect to air. R1 and R2 are the radius of curvature of the curved surfaces respectively. R1 is positive and R2 is negative for convex lens. R1 is negative and R2 positive for concave lens.