The document Meiosis Stages NEET Notes | EduRev is a part of the NEET Course Biology Class 11.
All you need of NEET at this link: NEET

Interphase – same as in mitosis Stages of meiosis I

I : This is longest and most complex stage of meiosis. Prophase I is classified in five sub-stages :

(c) Pachytene (Thick thread) – Due to increased attraction, homologous chromosomes tightly coil around each other.

Theories of crossing over–

(d) Diplotene – The beginning of dipotene is recognised by dissolve of synalptonemal complex (desynapsis) Homologous chromosomes start repulsing each other so chiasmata become visible. Due to repulsion (desynapsis) chiasmata begin to move along with length of chromosome and towards the end of chromosome. This event is called terminalization.

Homologous chromosomes remain attach to each other only at the ends. Centrioles move towards the opposite poles. 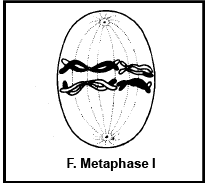 2. Metaphase I : Bivalents arrange on equator (congression) of cell to form metaphase plate. Three types of spindle fibres appear in the cell.

4. Telophase I : Just like the telophase of mitosis Due to formation of nuclear embrane conduction of cell is called as dyad of cell.

It can't be termed as interphase because replication of DNA is absent in interkinesis.

Eg. all the plants except thallophyta.

(2) By crossing over, meiosis provides an opportunity of exchange of genes (variations) & thus meiosis is raw material for process of evolution.

It is a process of division without recognizable chromosomes. Amitosis does not involve the formation of spindle. Division of nucleus is direct. i.e. without sequential changes (prophase, metaphase, anaphase & telophase). In amitosis, division of cytoplasm and nucleus occur simultaneously  by the constriction. In amitosis division may be equal or unequal. Amitosis is fastest cell division which may complete in 20–30 minute.

Amitosis is cell division of prokaryotes. But exceptionaly also occurs in some eukaryotes. eg. yeast–budding occurs by amitosis.

(i) A variety of membrane protein may present in or on the membrane are called as cell adhesion molecule (CAMs). eg. 'Cadherins (in cell adhesion), integrins and selectins (work in inflammatory response).

(1) Uniporter carrier proteins:-When a carrier transports only single solute from one side of membrane to other side.

(2) Symporters :- When carriers transport one solute which depends on transport of simultaneously second solute in same direction.

(3) Antiporter carrier protein:-When carrier transports one solute which depends on simultaneously second solute in the opposite direction. Satellite DNA :- Repeatitive sequence used to know relation among species because two most important features of satellite DNA are

(i) Remarkable relative uniformity within the same species.