Alligation is a rule that enables us to find the ratio in which two or more ingredients at the given price must be mixed to produce a mixture of the desired price.There are two types of methods used in alligation. 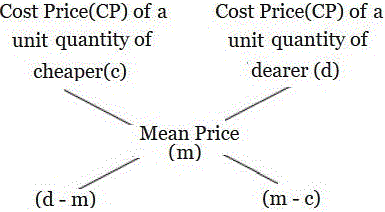 Note: (1) This method can be used when per cent, per hour, per km, per kg etc are being compared(2) The CP of the unit quantity of the mixture is called the mean price (M) 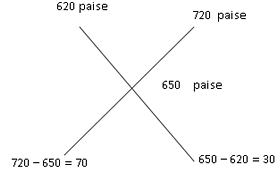 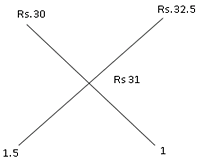 Example 3: The mixture of a certain quantity of milk with 16 litres of water is worth 0.75 per litre. If pure milk is worth 2.25 per litre, how much milk is there in the mixture?

Sol. Cost of water is Rs 0 per litre. 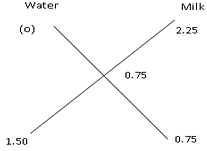 This is used to calculate pure quantity left after 'n' number of processes of repeated replacement is done on the pure quantity. Suppose, a container contains 'x' units of a liquid from which 'y' units are taken out and replaced by water.After 'n' operations quantity of pure will be:

How much milk is now left in the container?

Sol. Units of milk in the container, x = 50 LUnits of milk to be replaced, y = 10 Lnumber of process of repeated replacement = 2

Applying the Replacement Method: Amount of milk after 2 operations =

Try yourself:A container contains 40 liters of milk. From this container, 4 liters of milk were taken out and replaced by water. This process was repeated further two times. How much milk is now contained by the container?
Explanation

View Solution
Try yourself:A vessel is filled with liquid, 3 parts of which are water and 5 parts syrup. How much of the mixture must be drawn off and replaced with  water so that the mixture may be half water and half syrup?
Explanation

View Solution
Try yourself:Tea worth Rs. 126 per kg and Rs. 135 per kg are mixed with a third variety of tea in the ratio 1:1:2. If the mixture is worth Rs. 153 per kg, what is the price of the third variety per kg?
Explanation

View Solution
Try yourself:A can contains a mixture of two liquids A and B is the ratio 7:5. When 9 liters of the mixture are drawn off and the can is filled with B, the ratio of A and B becomes 7:9. How many liters of liquid A were contained by the can initially?
Explanation

Let Cost Price(CP) of the 1-litre spirit be Rs.1

View Solution
Try yourself:8 litres are drawn from a cask full of wine and is then filled with water. This operation is performed three more times. The ratio of the quantity of wine now left in cask to that of the water is 16 : 65. How much wine did the cask originally hold?
Explanation

View Solution
Try yourself:A dishonest milkman professes to sell his milk at cost price but he mixes it with water and thereby gains 25%. The percentage of water in the mixture is:
Explanation

View Solution
Try yourself:A jar full of whiskey contains 40% alcohol. A part of this whisky is replaced by another containing 19% alcohols and now the percentage of alcohol was found to be 26%. The quantity of whisky replaced is:
Explanation