The process of superimposing the audio signal over a high frequency carrier wave is called modulation.

In the process of modulation anyone characteristic of carrier wave is varied in accordance with the instantaneous value of audio signal (modulating signal).

(ii) For efficient radiation and reception of signal. the transmitting and receiving antennas should be very high approximately 5000 m.

(iii) The frequency range of audio signal is so small that overlapping of signals create a confusion.

Bandwidth required for amplitude modulation= twice the frequency of the modulating signal.

(iii) Pulse Modulation In this type of modulation, the continuous waveforms are sampled at regular intervals. Information is transmitted only at the sampling times

The process of separating of audio signal from modulated signal is called demodulation.

The term modem is contraction of the term modulator and demodulator. Modem is a device which can modulate as well as demodulate the signal. It connect one computer to another through ordinary telephone lines.

The radio waves are the electromagnetic waves of frequency ranging from 500 kHz to about 1000 MHz. These waves are used In the field of radio communication. With reference to the frequency range and wavelength range, the radio waves have been divided into various categories shown in table.

The three modes are discussed below.

(i) Ground Wave or Surface Wave Propagation It is suitable for low and medium frequency up to 2 MHz. It is used for local broad casting.

(ii) Sky Wave Propagation It is suitable for radio waves of frequency between 2 MHz to 30 MHz. It is used for long distance radio communication. 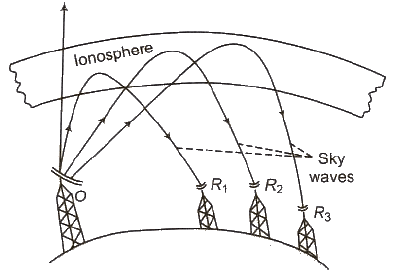 Critical Frequency The highest frequency of radio wave that can be reflected back by the ionosphere is called critical frequency.

Where, Nmax = number density of electrons/metre3.

Skip Distance The minimum distance from the transmitter at which a sky wave of a frequency but not more than critical frequency, is sent back to the earth.

where h is height of reflecting layer of atmosphere,

Vmax is maximum frequency of electromagnetic waves and Vc is critical frequency.

Fading The variation in the strength of a signal at receiver due to interference of waves, is called fading. 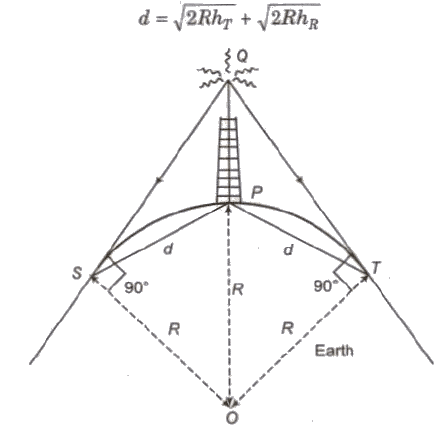 It IS carried out between a transmitter and a receiver through a satellite. A geostationary satellite is utilized for this purpose, whose time period is 24 hours.

A communication satellite is a space craft, provided with microwave receiver and transmitter. It is placed in an orbit around the earth. The India remote sensing satellites are

The basic requirements for geostationary satellites are as follows:

1. If a system on the satellite goes out of order due to environmental stresses, it is almost impossible to repair it.

2. In satellite communication, there is a time delay between transmission and reception, due to extremely large communication path length (greater than 2 x 36000 km). This delay causes a time gap during talking, which proves quite annoying.

It is a technique of observing or measuring the characteristics of the object at a distance. A polar satellite is utilized for this purpose.

where, h is height of antenna and R is radius of earth.

LED and Diode Laser in Communication

An optical fibre is a long thread consisting of a central core of glass or plastic of uniform refractive index. It is surrounded by a cladding of material of refractive index less than that of the core and a protective Jacket of insulating material.

There are three types of optical fibre configuration

The document Modulation and Wave Propagation - Notes | Study Physics Class 12 - NEET is a part of the NEET Course Physics Class 12.
All you need of NEET at this link: NEET
Attempt Now
Join Course