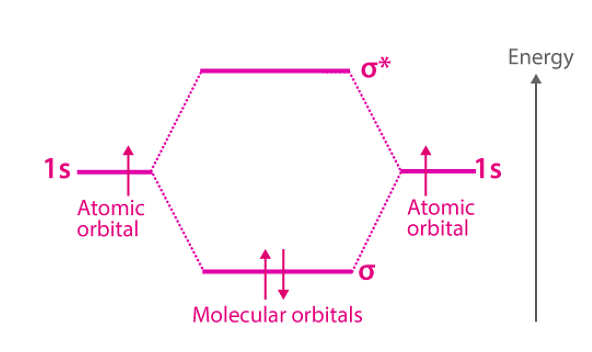 (I) There is Linear combination of Atomic Orbitals (LCAO) to form molecular orbitals (M.O.)

(a) Bonding molecular orbitals at a lower energy than the combining atomic orbitals which favour bond formation.

(b) Anti - bonding molecular orbitals at a higher energy than the combining atomic orbitals which opposes the bond formation.

(a) When total electrons in the molecule or ions are more than 14(simple order of energy level of M. O.).

(b) When total number of electrons in the molecule are ions are  ≤ 14 (modified order of energy level of M.O.).

(I) The electrons are filled in molecular orbitals in the same way as in atomic orbitals, that is, as per the Hund's Rule, Pauli exclusion principle and Aufbau rule.

(II) Number of covalent bonds between two atoms is called Bond order and is given by Bond order (B.O.) =

(IV) A given molecule or ion is paramagnetic if it has unpaired electrons in the molecular orbital. Otherwise it is diamagnetic

Relative energies of M.O. and filling of electron

Energy diagram is shown below: 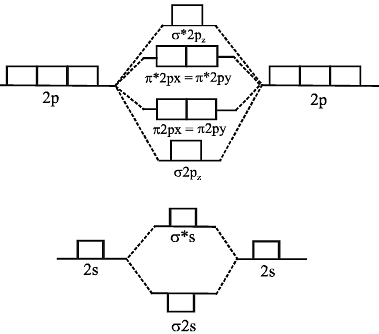 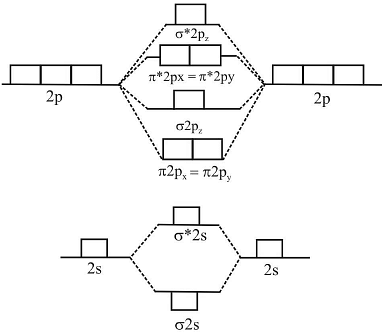 This rule is used to decide relative ionic & covalent character in a molecule. A molecule is predominantly covalent if

(I) Smaller the size of cation.

(II) larger the size of anion.

(III) greater the charge on cation and anion.

(I) The concept of H-bonding was introduced by Latimer and Rodebush.

(II) H-bonding is said to be formed when slightly acidic hydrogen attached to a strongly electronegative atom such as F, O and N is held with weak electrostatic forces by the non- bonded pair of electron of another atom. That is , it is a dipole-dipole interaction.

(III) Of all the electronegative donor atoms, only F, O. and N enter into stable H-bond formation.

(IV) The weak electrostatic interaction leading to the H-bond formation is shown by dashed(.....) lines.

(V) Greater the electronegativity difference, stronger is the H-bond. For example,

This type of H-bonding occurs when polar H and electronegative atom are present in the same molecule.

This type of H-bonding takes place between hydrogen and electronegative element (like F,O,N) present between molecules of the same substance (H2O and H2O) or different substances (H2O and NH3).