Monetary policy is the process by which monetary authority of a country, generally a central bank controls the supply of money in the economy by exercising its control over interest rates in order to maintain price stability and achieve high economic growth. In India, the central monetary authority is the Reserve Bank of India (RBI) is so designed as to maintain the price stability in the economy.

Other objectives of the monetary policy of India, as stated by RBI, are:

Price Stability implies promoting economic development with considerable emphasis on price stability. The centre of focus is to facilitate the environment which is favourable to the architecture that enables the developmental projects to run swiftly while also maintaining reasonable price stability.

One of the important functions of RBI is the controlled expansion of bank credit and money supply with special attention to seasonal requirement for credit without affecting the output.

The aim here is to increase the productivity of investment by restraining non essential fixed investment.

Overfilling of stocks and products becoming outdated due to excess of stock often results is sickness of the unit. To avoid this problem the central monetary authority carries out this essential function of restricting the inventories. The main objective of this policy is to avoid over-stocking and idle money in the organization

Monetary policy pays special attention in order to boost exports and facilitate the trade. It is an independent objective of monetary policy.

It is another essential aspect where the central banks pay a lot of attention. It tries to increase the efficiency in the financial system and tries to incorporate structural changes such as deregulating interest rates, ease operational constraints in the credit delivery system, to introduce new money market instruments etc.

RBI tries to bring about the flexibilities in the operations which provide a considerable autonomy. It encourages more competitive environment and diversification. It maintains its control over financial system whenever and wherever necessary to maintain the discipline and prudence in operations of the financial system.

Discriminatory rates of interest changed on the certain type of advances

Cash Reserve Ratio
Cash Reserve Ratio is a certain percentageof bank deposits which b anks are required tokeep with RBI in the form of reserves or balances .Higher the CR R with the RBI lowerwill be the liquidity in t he system and vice-versa.RBI is empowered to vary CRR between 15 percent and 3 percent. But as per the suggestion by the Narshimam committee Report the CRR was reduced from 15% in the 1990 to 5 percent in 2002. As of November 2012, the CRR is 4.25 percent.[3] 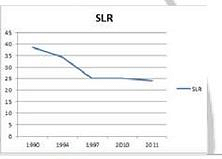 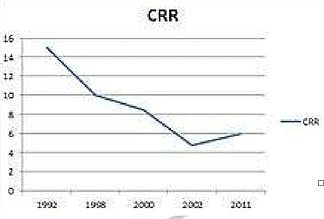 Bank rate is the rate of interest charged by the RBI for providing funds or loans to the banking system. This banking system involves commercial and co-operative banks, Industrial Development Bank of India, IFC, EXIM Bank, and other approved financial institutes. Funds are provided either through lending directly or rediscounting or buying money market instruments like commercial bills and treasury bills. Increase in Bank Rate increases the cost of borrowing by commercial banks which results into the reduction in credit volume to the banks and h ence declines the supply of money. Increase in the bank rate is the symbol of tightening of RBI monetary policy. Bank rate is also known as Discount rate. The current Bank rate is 9%. 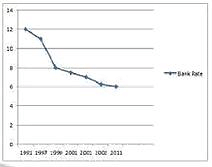 In this operation RBI issues prior information or direction that loans to the commercial banks will be given up to a certain limit. In this case commercial bank will be tight in advancing loans to the public. They will allocate loans to limited sectors. Few example of ceiling are agriculture sector advances, priority sector lending.

Credit Authorization Scheme was introduced in November, 1965 when P C Bhattacharya was the chairman of RBI. Under this instrument of credit regulation RBI as per the guideline authorizes the banks to advance loans to desired sectors.[7]

Moral Suasion is just as a request by the RBI to the commercial banks to take so and so action and measures in so and so trend of the economy. RBI may request commercial banks not to give loans for unproductive purpose which does not add to economic growth but increases inflation.