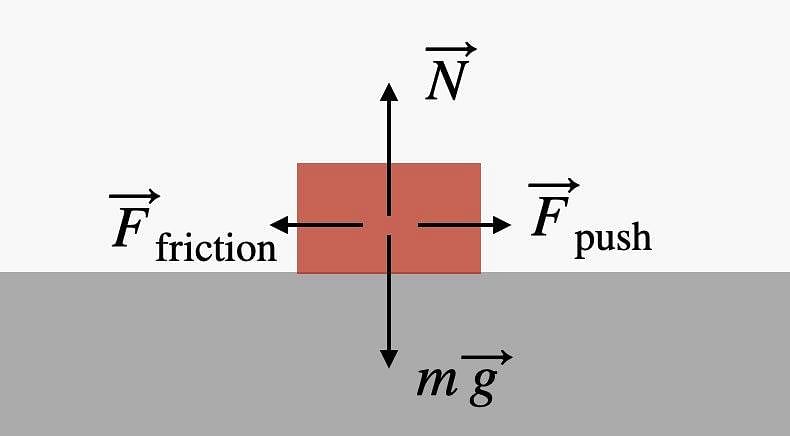 It exists when two solid un-lubricated surfaces are in contact under the condition of sliding or tendency of sliding. It is also known as Coulomb friction.

In mechanics of non-deformable bodies, we are always concerned with the dry friction. Therefore, we often drop the word “dry” and simply call it friction.

To understand nature of friction let us consider a box of weight W placed on a horizontal rough surface. 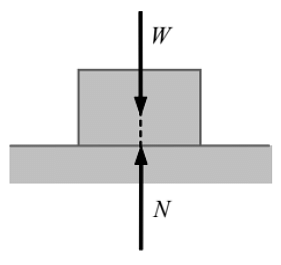 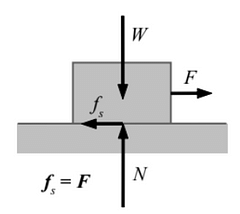 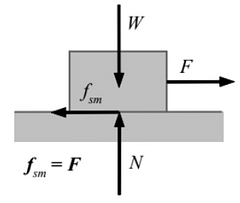 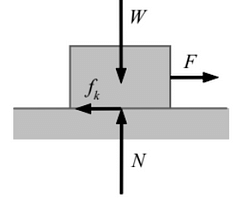 Kinetic FrictionWhen the box starts sliding, to maintain it sliding still a force F is needed to over come frictional force. This frictional force is known as kinetic friction (fk ).It always opposes sliding.

Fluid friction is developed when adjacent layers of a fluid move at different velocities and gives birth to phenomena, which we call viscosity of the fluid. Resistance offered to motion of a solid body in a fluid also comes in this category and commonly known as viscous drag. We will study this kind of friction in fluid mechanics.

Frictional forces exist everywhere in nature and result in loss of energy that is primarily dissipated in form of heat. Wear and tear of moving bodies is another unwanted result of friction. Therefore, sometimes, we try to reduce their effects – such as in bearings of all types, between piston and the inner walls of the cylinder of an IC engine, flow of fluid in pipes, and aircraft and missile propulsion through air.

Though these examples create a negative picture of frictional forces, yet there are other situations where frictional forces become essential and we try to maximize the effects. It is the friction between our feet and the earth surface, which enables us to walk and run. Both the traction and braking of wheeled vehicles depend on friction.

When a normal force N exists between two surfaces, and we try to slide them over each other, the force of static friction (fs) acts before sliding initiates. It can have a value maximum up to the limiting friction (fsm).

The limiting friction is experimentally observed proportional to the normal reaction between surfaces in contact.

Here μs is the constant of proportionality. It is known as the coefficient of static friction for the two surfaces involved.

When sliding starts between the surfaces, the frictional force rapidly drops to a characteristic value, which always opposes the sliding.

The limiting static friction and the kinetic friction between any pair of solid surfaces follow these two empirical laws:

(i) Frictional forces are independent of measured area of contact.

(ii) Both the limiting static friction and kinetic friction are proportional to the normal force pressing the surfaces in contact.

The angle of friction is the angle between resultant contact force of and normal reaction N, when sliding is initiating. It is denoted by λ 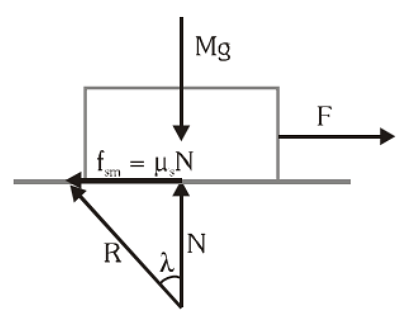 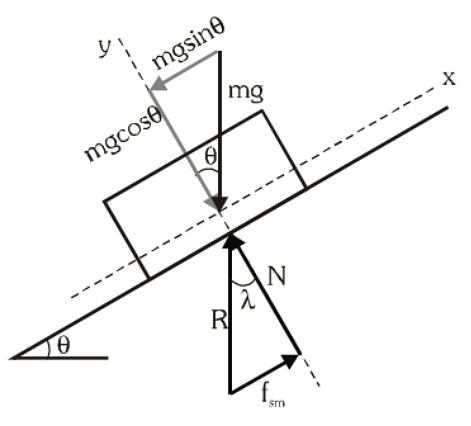 Angle of repose is that minimum angle of inclination at which a body placed on the inclined starts sliding down due to its own weight. Thus, angle of repose = angle of friction.

➤ Example.1. A block of mass 1 kg is at rest on a rough horizontal surface, where coefficients of static and kinetic friction are 0.2 and 0.15.

Find the frictional forces if a horizontal force

So, body is in rest means static friction is present and hence fs = F = 1 N

➤ Example.2. Length of a uniform chain is L and coefficient of static friction is μ between the chain and the table top. Calculate the maximum length of the chain which can hang from the table without sliding. 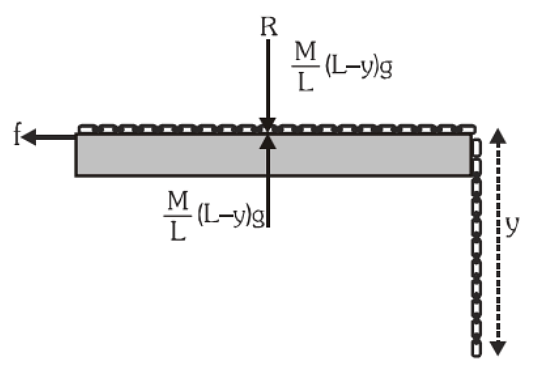 Solution. Let y be the maximum length of the chain that can hang without causing the portion of chain on table to slide.

Weight of part of the chain on table =

Weight of hanging part of the chain =

For equilibrium with maximum portion hanging,

limiting friction = weight of hanging part of the chain

Motion on a Rough Inclined Plane 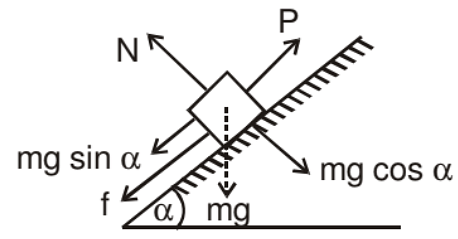 ➤ Example.3. A 20 kg box is gently placed on a rough inclined plane of inclination 30° with horizontal. The coefficient of sliding friction between the box and the plane is 0.4. Find the acceleration of the box down the incline.

Solution. In solving inclined plane problems, the X and Y directions along which the forces are to be considered, may be taken as shown. The components of weight of the box are

➤ Example.4. A force of 400 N acting horizontal pushes up a 20 kg block placed on a rough inclined plane which makes an anlge of 45° with the horizontal. The acceleration experienced by the block is 0.6 m/s2. Find the coefficient of sliding friction between the box and incline.

Solution. The horizontally directed force 400 N and weight 20 kg of the block are resolved into two mutually perpendicular components, parallel and perpendicular to the plane as shown. 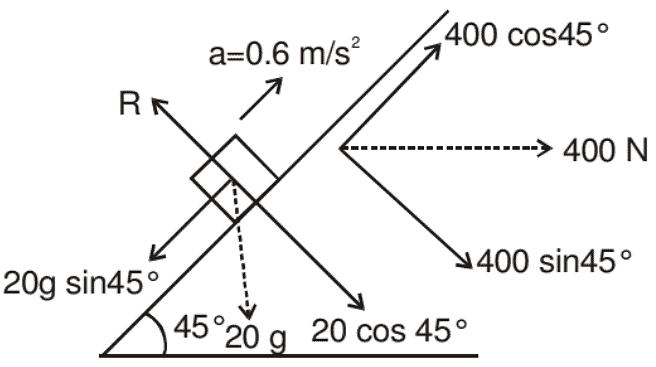 The frictional force experienced by the block

As the accelerated motion is taking placed up the plane.

The coefficient of sliding friction between the block and the incline = 0.3137

Two Blocks on an Inclined Plane

Consider two blocks having masses m1 & m2 placed on a rough inclined plane. μ1 & μ2 are the friction coefficient for m1 & m2 respectively. If N is the normal force between the contact surface of m1 & m2 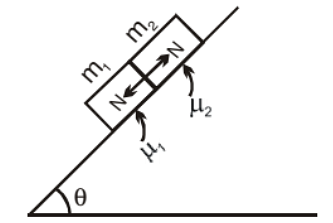 N = 0 because, there is no contact between the blocks.

➤ Example.5. Mass m1 & m2 are placed on a rough inclined plane as shown in figure. Find out the acceleration of the blocks and contact force in between these surface. 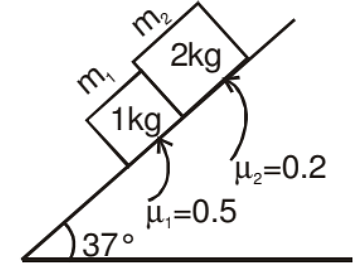 Sol. As we know if μ1 > μ2 both will travel together so 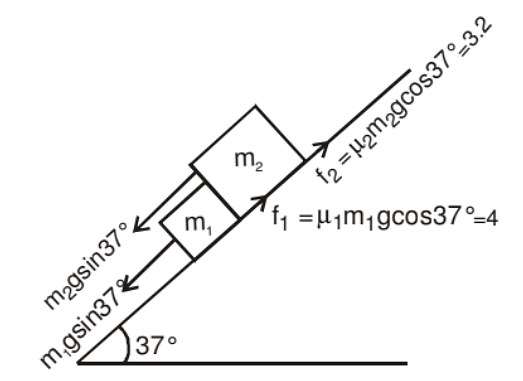 which is equivalent to 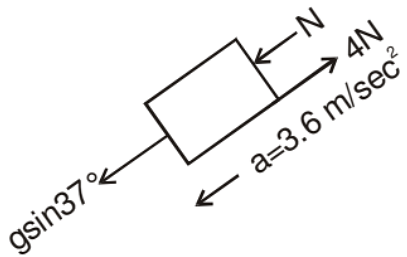 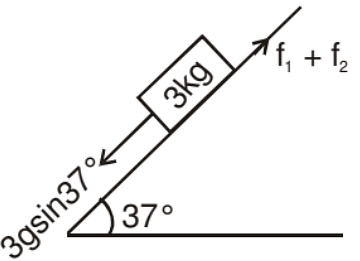 ➤ Example.6. Two blocks of masses 5 kg and 10 kg are attached with the help of light string and placed on a rough incline as shown in the figure. Coefficients of friction are as marked in the figure. The system is released from rest. Determine the acceleration of the two blocks. 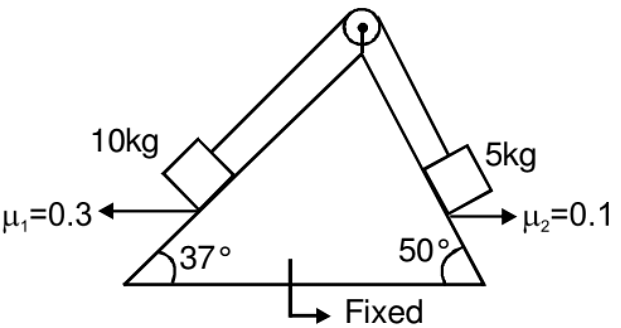 Solution. Let 10 kg block is sliding down, then acceleration of both the blocks are given by,

It means our assumed direction of motion is wrong and 5 kg block is going to slide down, if this would be the case, the direction of friction force will reverse and acceleration of blocks would be given by :

It means in this direction also there is no motion. So we can conclude that the system remains at rest and friction force is static in nature.

➤ Example.7. Find out the maximum value of F for which both the blocks will move together. 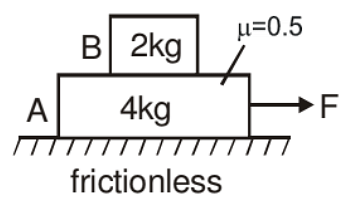 Solution. In the given situation 2kg block will move only due to friction force exerted by the 4 kg block

The maximum friction force exerted on the block B is

So the maximum acceleration of 2 kg block is

Both the block move together.

➤ Example.8. In the above question find the acceleration of both the block when

Solution. (i) Since F < 30 both the blocks will move together

➤ Example.9. Find out the range of force in which both the blocks move together. 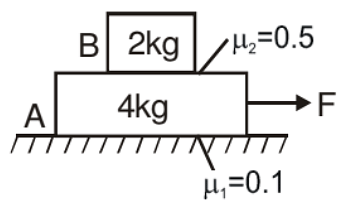 This is the maximum acceleration for which both the blocks will move together.

Therefore for a ≤ 5ms-2 we can take both the blocks as one system.

Now the value of Fmax for which both the blocks will move together. 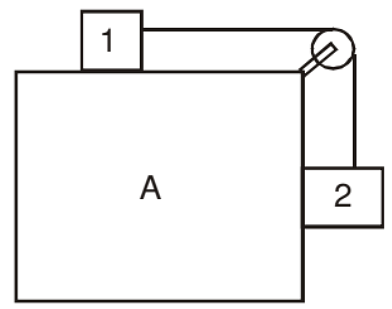 Solution. Let us place the observer on A.

Since we have non-inertial frame we have pseudo forces. 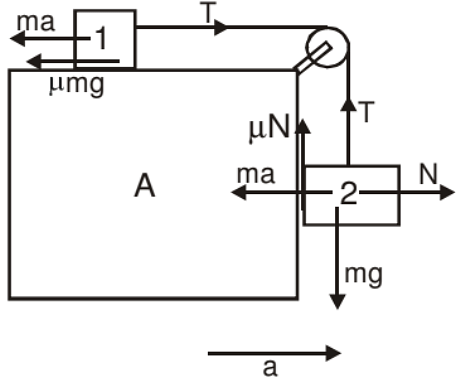 ➤ Example.11. Mass m2 placed on a plank of mass m1 lying on a smooth horizontal plane. A horizontal force F = a0t (a0 is a constant) is applied to a bar. If acceleration of the plank and bar are a1 and a2 respectively and the coefficient of friction between m1 and m2 is m. Then find acceleration a with time t. 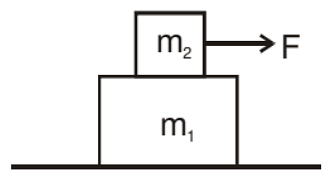 Equation for block of mass m

i.e., acceleration a2 varies with time linearly, its slope positive and intercept negative.

From equation (2) a1 is independent of time.

So, the graph between a & t is as follow. 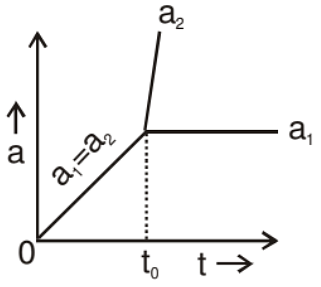 The document Friction & Its Types - Notes | Study Physics Class 11 - NEET is a part of the NEET Course Physics Class 11.
All you need of NEET at this link: NEET
Attempt Now
Join Course