The document NCERT EXEMPLAR - Periodic Classification of Elements Class 10 Notes | EduRev is a part of the Class 10 Course Science Class 10.
All you need of Class 10 at this link: Class 10

Q.1. The three elements A, B and C with similar properties have atomic masses X, Y and Z, respectively. The mass of Y is approximately equal to the average mass of X and Z. What is such an arrangement of elements called as? Give one example of such a set of elements.Ans.

Q.2. Elements have been arranged in the following sequence on the basis of their increasing atomic masses.F, Na, Mg, Al, Si, P, S, Cl, Ar, K(a) Pick two sets of elements which have similar properties.(b) The given sequence represents which law of classification of elements?Ans.
(a)

(b) Newland’s Law of Octaves

Q.4. In Mendeleev’s Periodic Table, the elements were arranged in the increasing order of their atomic masses. However, cobalt with atomic mass of 58.93 amu was placed before nickel having an atomic mass of 58.71 amu. Give reason for the same.Ans. It was because elements with similar properties were grouped together, and increasing order of atomic mass could not be followed.Q.5. “Hydrogen occupies a unique position in the Modern Periodic Table”. Justify the statement.Ans. Hydrogen resembles with both group 1 (Alkali metals) and group 17 (Halogens). Therefore, it occupies a unique position in the Modern Periodic Table.Q.6. Write the formula of chlorides of Eka-silicon and Eka-aluminium, the elements predicted by Mendeleev.Ans.

Q.7. Three elements A, B and C have 3, 4 and 2 electrons respectively in their outermost shell. Give the group number to which they belong in the Modern Periodic Table. Also, give their valencies.Ans.

Q.8. If an element X is placed in group 14, what will be the formula and the nature of bonding of its chloride?Ans.

Q.13. Identify the elements with the following property and arrange them in increasing order of their reactivity.(a) An element which is a soft and reactive metal.(b) The metal which is an important constituent of limestone.(c) The metal which exists in liquid state at room temperature.Ans.
(a) Na (Sodium) or K (Potassium)(b) Ca (Calcium)(c) Hg (Mercury)Reactivity order: Hg < Ca < Na < K.

Q.15. An element is placed in 2nd Group and 3rd Period of the Periodic Table burns in the presence of oxygen to form a basic oxide.(a) Identify the element.(b) Write the electronic configuration.(c) Write the balanced equation when it burns in the presence of air.(d) Write a balanced equation when this oxide is dissolved in water.(e) Draw the electron dot structure for the formation of this oxide.Ans. 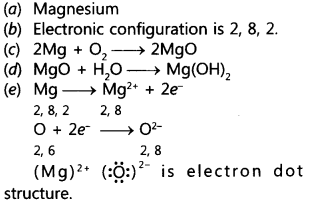 Q.16. An element X (atomic number 17) reacts with an element Y (atomic number 20) to form a divalent halide.(a) Where in the periodic table are elements X and Y placed?(b) Classify X and Y as metal(s), non-metal(s) or metalloid(s)(c) What will be the nature of oxide of element Y? Identify the nature of bonding in the compound formed.(d) Draw the electron dot structure of the divalent halide.Ans. (a) ‘X’ is in group 17 and 3rd period, ‘Y’ is in group 2 and 4th period.(b) ‘X’ is non-metal, and 'Y’ is a metal.(c) ‘Y’ forms basic oxide. It has ionic bonding in the oxide formed.(d)

Q.18. Mendeleev predicted the existence of certain elements not known at that time and named two of them as Eka-silicon and Eka-aluminium.(a) Name the elements which have taken the place of these elements.(b) Mention the group and the period of these elements in the Modern Periodic Table.(e) Classify these elements as metals, non-metals or metalloids.(d) How many valence electrons are present in each one of them?Ans.
(a)

Q.20. An element X which is a yellow solid at room temperature shows catenation and allotropy. X forms two oxides which are also formed during the thermal decomposition of ferrous sulphate crystals and are the major air pollutants.(a) Identify the element X.(b) Write the electronic configuration of X.(c) Write the balanced chemical equation for the thermal decomposition of ferrous sulphate crystals.(d) What would be the nature (acidic/basic) of oxides formed?(e) Locate the position of the element in the Modern Periodic Table.Ans.
(a) ‘X’ is sulphur.(b) Electronic configuration of ‘X' is 2, 8, 6.
(c)

(d) SO2 and SO3 are acidic oxides.
(e) It belongs to Group 16 and 3rd period.Q.21. An element X of group 15 exists as diatomic molecule and combines with hydrogen at 773 K in the presence of the catalyst to form a compound, ammonia which has a characteristic pungent smell.(a) Identify the element X. How many valence electrons does it have?(b) Draw the electron dot structure of the diatomic molecule of X. What type of bond is formed in it?(c) Draw the electron dot structure for ammonia, and what type of bond is formed in it?Ans.
(a) ‘X’ is nitrogen. It has 5 valence electrons.
(b)

The bond formed is a covalent bond.

Q.22. Which group of elements could be placed in Mendeleev’s Periodic Table without disturbing the original order? Give reason.Ans. Noble gases can be placed in a separate group without disturbing original order as the elements are arranged in increasing order of their atomic masses in Mendeleev’s Periodic Table.Q.23. Give an account of the process adopted by Mendeleev for the classification of elements. How did he arrive at “Periodic Law”?Ans.