The document NCERT Exemplar (Part - 1) - Thermodynamics Notes | EduRev is a part of the JEE Course JEE Revision Notes.
All you need of JEE at this link: JEE
MULTIPLE CHOICE QUESTIONS

Q.1. Thermodynamics is not concerned about______.(1) Energy changes involved in a chemical reaction.(2) The extent to which a chemical reaction proceeds.(3) The rate at which a reaction proceeds.(4) The feasibility of a chemical reaction.Ans. (3)Solution.Thermodynamics is not concerned about how and at what rate these energy transformations are carried out, but is based on initial and final states of a system undergoing the change. Laws of thermodynamics apply only when a system is in equilibrium or moves from one equilibrium state to another equilibrium state.Q.2. Which of the following statements is correct?(1) The presence of reacting species in a covered beaker is an example of open system.(2) There is an exchange of energy as well as matter between the system and the surroundings in a closed system.(3) The presence of reactants in a closed vessel made up of copper is an example of a closed system.(4) The presence of reactants in a thermos flask or any other closed insulated vessel is an example of a closed system.Ans. (3)Solution.The presence of reactants in a closed vessel made of conducting material e.g., copper or steel is an example of a closed system.Q.3. The state of a gas can be described by quoting the relationship between___.(1) Pressure, volume, temperature(2) Temperature, amount, pressure(3) Amount, volume, temperature(4) Pressure, volume, temperature, amountAns. (4)Solution.Variables like p, V, T are called state variables or state functions because their values depend only on the state of the system and not on how it is reached.Q.4. The volume of gas is reduced to half from its original volume. The specific heat will be ______.(1) Reduce to half(2) Be doubled(3) Remain constant(4) Increase four timesAns. (3)Solution.Specific heat capacity is the quantity of heat required to raise the temperature of one unit mass of a substance by one degree celsius (or one kelvin). That is why it is an a intensive property which does not depend on mass.Q.5. During complete combustion of one mole of butane, 2658 kJ of heat is released.The thermochemical reaction for above change is(1) 2C4H10(g) + 13O2(g) → 8CO2(g) + 10H2O(l) ΔcH = -2658.0 kJ mol-1(2)

Therefore, the entropy of the system decreases and that of surroundings increases.Q.10. On the basis of thermochemical equations (a), (b) and (c), find out which of the algebraic relationships given in options (i) to (iv) is correct.(a) C (graphite) + O2(g) → CO2 (g) ;ΔrH = x kJ mol-1(b)

Subtracting equation (i) and (ii) we get

are same in both the cases,therefore,

Q.20. 18.0 g of water completely vapourises at 100°C and 1 bar pressure and the enthalpy change in the process is 40.79 kJ mol–1. What will be the enthalpy change for vapourising two moles of water under the same conditions? What is the standard enthalphy of vapourisation for water?Ans. Enthalpy of a reaction is the energy change per mole for the process.18 g of H2O = 1 mole (∆Hvap = 40.79 kJ moE1)Enthalpy change for vapourising 2 moles of H2O = 2 × 40.79 = 81.58 kJ ∆H°vap = 40.79 kJ mol -1Q.21. One mole of acetone requires less heat to vapourise than 1 mol of water. Which of the two liquids has higher enthalpy of vapourisation?Ans. Due to weak force of attraction between molecules, acetone requires less heat to vaporise. Hence, water has higher enthalpy of vaporisation.Q.22. Standard molar enthalpy of formation, ∆fHΘ is just a special case of enthalpy of reaction, ∆rHΘ. Is the ∆rHΘ for the following reaction same as ∆fHΘ? Give reason for your answer.CaO(s) + CO2(g) → CaCO3(s); ∆fHΘ = –178.3 kJ mol–1Ans. No, standard molar enthalpy of formation is the enthalpy of the reaction when 1 mole of compound is formed from its constituent elements. 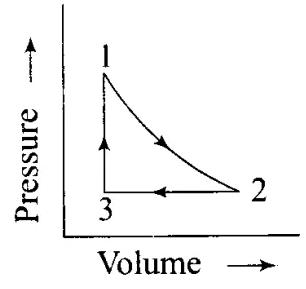