(i) Bulb will not glow because the electrolyte is not acidic

(ii) Bulb will glow because NaOH is a strong base and furnishes ions for conduction.

(iii) Bulb will not glow because the circuit is incomplete 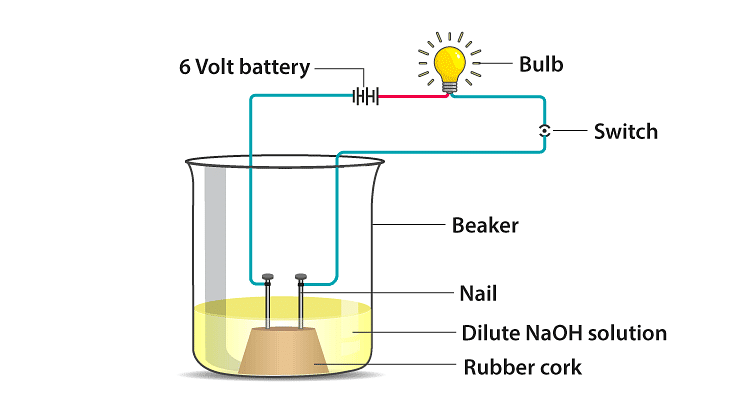 Ans: (d)Explanation: Gold is a noble metal which will not react even with strong acids, hence aqua regia, which is a mixture of Nitric and Hydrochloric acid in the ratio 1:3 is used for dissolution of gold.Q.22. Which of the following is not a mineral acid?(a) Hydrochloric acid(b) Citric acid(c) Sulphuric acid(d) Nitric acidAns: (b)Explanation: Citric acid is the organic acid hence it is the answerQ.23. Which among the following is not a base?(a) NaOH(b) KOH(c) NH4OH(d) C2H5 OHAns: (d)Explanation: C2H5 OH is alcohol, not a baseQ.24. Which of the following statements is not correct?(a) All metal carbonates react with acid to give a salt, water and carbon dioxide(b) All metal oxides react with water to give salt and acid(c) Some metals react with acids to give salt and hydrogen(d) Some non-metal oxides react with water to form an acidAns: (b)Explanation: Metal oxides are basic in nature hence they give alkaline solution when dissolved in water.Q.25. Match the chemical substances given in Column (A) with their appropriate application given in Column (B)

Explanation: Here neutralization takes place between HCL and NaOH solution hence PH will remain neutral which will be in the yellowish-green zone in PH paper.Q.27. Which of the following is(are) true when HCl (g) is passed through water?(i) It does not ionise in the solution as it is a covalent compound.(ii) It ionises in the solution(iii) It gives both hydrogen and hydroxyl ion in the solution(iv) It forms hydronium ion in the solution due to the combination of hydrogen ion with water molecule(a) (i) only(b) (iii) only(c) (ii) and (iv)(d) (iii) and (iv)Ans: (c)Explanation: HCL is a strong acid which ionizes completely in water to produce Hydrogen as well as Hydrogen and chlorine. Hydrogen produces combine with water molecules to give Hydronium ions.Q.28. Which of the following statements is true for acids?(a) Bitter and change red litmus to blue(b) Sour and change red litmus to blue(c) Sour and change blue litmus to red(d) Bitter and change blue litmus to redAns: (c)Q.29. Which of the following are present in a dilute aqueous solution of hydrochloric acid?(a) H3O+ + Cl–(b) H3O+ + OH–(c) Cl– + OH–(d) unionised HClAns: (a)Explanation: Acid produces Hydrogen which will combine with a water molecule to produce Hydronium ion.Q.30. Identify the correct representation of reaction occurring during the chloralkali process(a) 2NaCl(l) + 2H2O(l) → 2NaOH(l) + Cl2 (g) + H2 (g)(b) 2NaCl(aq) + 2H2O(aq) → 2NaOH(aq) + Cl2 (g) + H2 (g)(c) 2NaCl(aq) + 2H2O(l) → 2NaOH(aq) + Cl2 (aq) + H2 (aq)(d) 2NaCl (aq) + 2H2O (l) → 2NaOH (aq) + Cl2 (g) + H2 (g)Ans: (d)

Q.33. What will be the action of the following substances on litmus paper? Dry HCl gas, Moistened NH3 gas, Lemon juice, Carbonated soft drink, Curd, Soap solution.Solution: Dry HCl gas- No effectMoistened NH3 gas- Turns litmus paper to blue colourLemon juice- Turns litmus paper to red colourCarbonated soft drink- Turns litmus paper to blue colourCurd- Turns litmus paper to red colourSoap solution- Turns litmus paper to blue colourQ.34. Name the acid present in ant sting and give its chemical formula. Also, give the common method to get relief from the discomfort caused by the ant sting.Solution: Ant sting release methanoic acid. The chemical formula of methanoic acid is HCOOH. If we rub baking soda on the affected area, it can give relief from the discomfort caused by ant sting.Q.35. What happens when nitric acid is added to eggshell?Solution: Nitric acid dissolved eggshell, which is made up of Calcium carbonate. Calcium carbonate on reacting with nitric acid yield Calcium Nitrate and carbon-di-oxide gas.Q.36. A student prepared solutions of (i) an acid and (ii) a base in two separate beakers. She forgot to label the solutions, and litmus paper is not available in the laboratory. Since both the solutions are colourless, how will she distinguish between the two?Solution: Student can use Phenopthalein indicator to check the nature of the solution.Q.37. How would you distinguish between baking powder and washing soda by heating?Solution: When we heat baking powder CO2 is released which can be confirmed by passing evolved gas into lime water which will turn milky. This reaction will not happen when you heat washing soda.Q.38. Salt A commonly used in bakery products on heating gets converted into another salt B which itself is used for removal of hardness of water, and a gas C is evolved. The gas C, when passed through lime water, turns it milky. Identify A, B and C.Solution: Salt A is Baking soda (Sodium Hydrogen Carbonate) which will turn to Sodium carbonate( Salt B) on heating. Gas C turns lime water milky; hence it must be CO2.Q.39. In one of the industrial processes used for the manufacture of sodium hydroxide, a gas X is formed as a by-product. The gas X reacts with lime water to give a compound Y which is used as a bleaching agent in the chemical industry. Identify X and Y, giving the chemical equation of the reactions involved.Solution: X = Chlorine (Cl 2)Y = Bleaching powder (CaOCl2)Ca(OH)2 (s) + Cl2 (g) →  CaOCl2 (s) + H2O — Calcium oxychloride (bleaching powder)Q.40. Fill in the missing data in the following table

Q.41. What are strong and weak acids? In the following list of acids, separate strong acids from weak acids. Hydrochloric acid, citric acid, acetic acid, nitric acid, formic acid, sulphuric acid.Solution: Strong acids are those that get completely ionized and weak acids are those that get partially ionized.Hydrochloric acid- Strong Acidcitric acid- Weak Acidacetic acid- Weak Acidnitric acid – Strong Acidformic acid- Weak Acidsulphuric acid- Strong AcidQ.42. When zinc metal is treated with a dilute solution of a strong acid, a gas is evolved, which is utilised in the hydrogenation of oil. Name the gas evolved. Write the chemical equation of the reaction involved and also write a test to detect the gas formed.Solution: When Zinc reacts with Dilute acid solution, the following reaction takes place, and hydrogen gas is evolvedZn + 2HCl→ ZnCl2 + H2When Hydrogen gas is brought near a burning flame, it burns with a popping sound, which is the confirmation for the evolution of Hydrogen gas.

Q.43. In the following schematic diagram for the preparation of hydrogen gas, as shown in Figure 2.3, what would happen if the following changes are made? 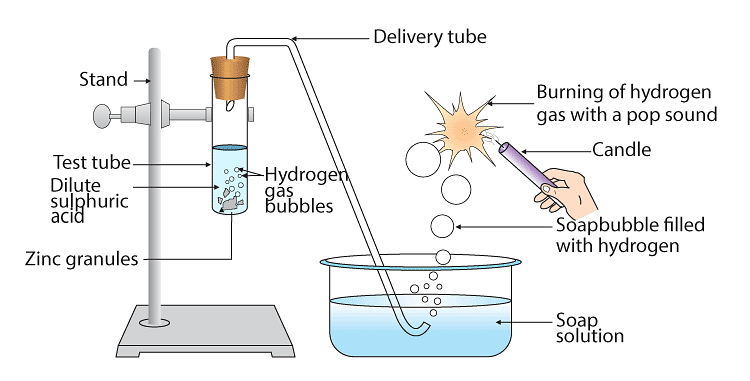 (d) Sodium Zincate is produced if we use NaOH solution in place of acidZn + 2NaOH → Na2ZnO2+ H2Q.44. For making a cake, baking powder is taken. If at home, your mother uses baking soda instead of baking powder in cake,(a) how will it affect the taste of the cake and why?(b) how can baking soda be converted into baking powder?(c) what is the role of tartaric acid added to baking soda?

Solution:a) If we use baking soda instead of baking powder taste of the cake will be bitter. Upon heating baking, soda sodium carbonate will be formed, which will make the cake taste bitter.2NaHCO3 +Heat Na2Co3+CO2+H2Ob) Baking soda can be converted into baking powder by adding an edible weak acid like tartaric acid.c) When tartaric acid is dissolved in water, it gives out Hydrogen ions. Hydrogen ions react with Sodium Carbonate to produce carbon dioxide, which will make the cake fluffy.Q.45. A metal carbonate X on reacting with acid gives a gas which when passed through a solution Y gives the carbonate back. On the other hand, a gas G that is obtained at the anode during electrolysis of brine is passed on dry Y, and it gives a compound Z, used for disinfecting drinking water. Identity X, Y, G and Z.Solution:X is Calcium. When calcium carbonate reacts with HCl, it gives out CO2 gas.CaCO3 + HCl→ CaCl2 + CO2 + H2OWhen CO2 is passed into lime water, it turns milky due to the formation of Calcium carbonate.Hence, solution Y is lime waterWhen chlorine gas is passed on dry lime water, it gives bleaching powder which is used for disinfecting water.Q.46. A dry pellet of a common base B, when kept in the open absorbs moisture and turns sticky. The compound is also a by-product of the chloralkali process. Identify B. What type of reaction occurs when B is treated with an acidic oxide? Write a balanced chemical equation for one such solution.Solution: A compound which is a byproduct of the chloralkali process is NaOH. Hence compound B is NaOH.When NaOH is treated with acidic oxide neutralization process occurs. For example, If NaOH is treated with carbon-di-oxide, it gives Sodium carbonate.2NaOH + CO2 →Na2CO3 + H2OQ.47. A sulphate salt of Group 2 element of the Periodic Table is a white, soft substance, which can be moulded into different shapes by making its dough. When this compound is left in the open for some time, it becomes a solid mass and cannot be used for moulding purposes. Identify the sulphate salt, and why does it show such behaviour? Give the reaction involved.Solution: The sulphate salt should be calcium sulphate which is white and soft substance. Calcium sulphate is popularly known as plaster of Paris.Plaster of Paris has half molecule of water of crystallization. When we leave plaster of Paris open for some time, it absorbs moisture to gain a number of molecules of crystallization. This newly formed compound is called Gypsum, which is hard to make moulds.Q.48. Identify the compound X on the basis of the reactions given below. Also, write the name and chemical formulae of A, B and C.