The document NCERT Exemplar - Carbon and its Compounds Notes | EduRev is a part of the Class 10 Course Science Class 10.
All you need of Class 10 at this link: Class 10

Q.1. Carbon exists in the atmosphere in the form of

(a) carbon monoxide only

(b) carbon monoxide in traces and carbon dioxide

(a) only single bonds

(b) only double bonds

Ans: aExplanation:Nitrogen has three electrons in its outermost shell and hydrogen has 1. 3 hydrogen atoms combine with 1 nitrogen atom to make ammonia. These bonds are single bonds.

Q.4. Buckminsterfullerene is an allotropic form of

Q.5. Which of the following are correct structural isomers of butane? 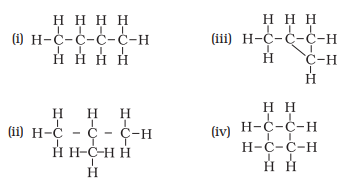 In the above-given reaction, alkaline KMnO4 acts as

Ans: bExplanation:Two Hydrogen atoms are replaced by an atom of oxygen making oxidation of ethanol. Here addition of oxygen is provided by potassium.

Q.7. Oils on treating with hydrogen in the presence of palladium or nickel catalyst form fats. This is an example of

Here Hydrogen is added to oil, hence it is an addition reaction.

Q.8. In which of the following compounds, — OH is the functional group?

Compound with OH Functional group will have a suffix ol in them hence answer is (b) Butanol.

Q.9. The soap molecule has a

(a) hydrophilic head and a hydrophobic tail

(b) hydrophobic head and a hydrophilic tail

Because of hydrophobic tail Oil and grease is trapped inside a micelle. Hydrophobic head makes the outer surface of micelle. Hence micelle is easily washed by water.

Q.10. Which of the following is the correct representation of the electron dot structure of nitrogen?(a)

Ans: dExplanation:In this structure Nitrogen atoms get 8 electrons whereas in other options it is different.

Q.11. Structural formula of ethyne is

Ans: aExplanation:Chemical formula of Ethyne is C2H2, Hence answer is a)

Ans: cExplanation:Chemical formula of Benzene is C6H6. In option call the arms of carbon atoms are occupied hence it is the right answer.

Q.17. Ethanol reacts with sodium and forms two products. These are

(a) sodium ethanoate and hydrogen

(b) sodium ethanoate and oxygen

Q.19. Vinegar is a solution of

23. Which of the following is not a straight-chain hydrocarbon?(a)

Q. 24. Which among the following are unsaturated hydrocarbons? 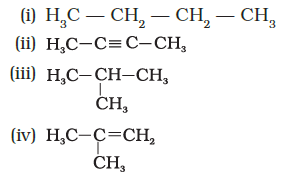 Explanation:General formula for C4H8 is CnH2n and for other option it is CnH2n+2

Q.29. The first member of the alkyne homologous series is

It is the electron dot structure of ethyne (C2H2)

is its structural formula.Q.2. Write the names of the following compounds.(a)

Q.5. Why are detergents better cleansing agents than soaps? Explain.Ans. It is because detergents form a lot of lather even with hard water. Hard water contains Ca2+ and Mg2+ ions which react with soap to form insoluble salts of calcium and magnesium called scum and soap goes waste. Detergents do not form insoluble compounds with Ca2+ and Mg2+ ions, therefore these are more effective.Q.6. Name the functional groups present in the following compounds. (a) CH3COCH2CH2CH2CH3 (b) CH3CH2CH2COOH (c) CH3 CH2 CH2 CH2CHO (d) CH3CH2OH Ans.(a) Ketone(b) Carboxylic acid(c) Aldehyde(d) Alcohol

Q.7. How is ethene prepared from ethanol? Give the reaction involved in it.Ans. Ethanol is heated at 443k along with excess Sulphuric acid to obtain Ethene.

Q.7. Intake of small quantity of methanol can be lethal. Comment.Ans. Methanol is oxidised to methanal in liver. Methanal is highly reactive and good reducing agent. It causes protoplasm to coagulate. It also affects the optic nerve and leads to blindness.

Q.9. Ethene is formed when ethanol at 443K is heated with excess of concentrated sulphuric acid. What is the role of sulphuric acid in this reaction? Write the balanced chemical equation of this reaction.Ans: Sulphuric acid acts as a catalyst and a dehydrating agent in the formation of ethene.

Q.10. Carbon, Group (14) element in the Periodic Table is known to form compounds with many elements. Write an example of a compound formed with:(a) Chlorine (Group 17 of Periodic Table)(b) Oxygen (Group 16 of Periodic Table)Ans.(a) CCl4 (Carbon tetrachloride)(b) CO2 (Carbon dioxide)Q.11. In electron dot structure, the valence shell electrons are represented by crosses or dots. (a) The atomic number of chlorine is 17.Write its electronic configuration. (b) Draw the electron dot structure of chlorine molecule.Ans. (a) Cl(17)Electronic configuration:

Q.12. Catenation is the ability of an atom to form bonds with other atoms of the same element. It is exhibited by both carbon and silicon. Compare the ability of catenation of the two elements. Give reasons.Ans. Carbon shows catenation to a large extent as compared to silicon as well as any other element due to smaller size of carbon. C—C bond is stronger than Si-Si bond because Si is larger in size, so it forms a weaker bond.Q.13. Unsaturated hydrocarbons contain multiple bonds between the two C-atoms and show addition reactions. Give the test to distinguish ethane from ethene.Ans. Add bromine water. Ethane will not react. Ethene will decolourise bromine water.Alternative Method:Combustion test:Ethane, a saturated hydrocarbon, will bum with blue flame which is non-smoky, whereas ethene, an unsaturated hydrocarbon, will bum with yellow flame which is smoky due to the presence of unburnt carbon particles.Q.14. Match the reactions given in Column (A) with the names given in Column (B).Ans. 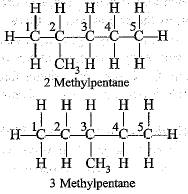 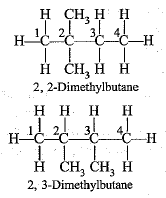 Q.16. What is the role of metal or reagents written on arrows in the given chemical reactions?

Ans.(a) Ni is used as a catalyst(b) Cone. H2SO4 acts as a dehydrating agent.(c) Alkaline KMnO4 is an oxidising agent.

Q.1. A salt ‘X’ is formed and a gas is evolved when ethanoic acid reacts with sodium hydrogen carbonate. Name the salt ‘X’ and the gas evolved.Describe an activity and draw the diagram of the apparatus to prove that the evolved gas is the one which you have named. Also write the chemical equation of the reaction involved.Ans.

Aim: To demonstrate the reaction of carboxylic acid with sodium carbonate and sodium hydrogencarbonate. 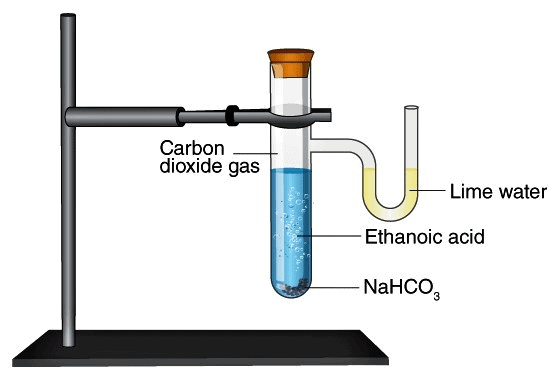 Conclusion: Carboxylic acid reacts with sodium carbonate and sodium hydrogencarbonate to liberate CO2 gas which turns lime water milky.Q.2.(a) What are hydrocarbons? Give examples. (b) Give the structural differences between saturated and unsaturated hydrocarbons with two examples each. (c) What is a functional group? Give examples of four different functional groups.Ans.(a) Hydrocarbons are the compounds made up of carbon and hydrogen atoms only, e.g. CH4 (methane), C2H6 (ethane), CH2= CH2 (ethene), etc.(b) Saturated hydrocarbons contain single covalent bonds only,

(c) Functional group is an atom or group of atoms or reactive part of the compound which determines chemical properties of the those compounds, e.g.(i) —OH (Alcohol)CH3CH2OH (Ethanol) 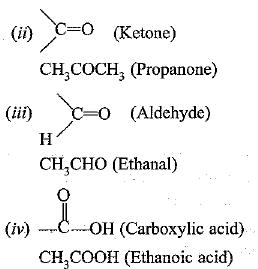 Q.3. Name the reaction which is commonly used in the conversion of vegetable oils to fats. Explain the reaction involved in detail.

Addition reaction is involved in the conversion of oils into fats. This process is known as Hydrogenation. Here Unsaturated vegetable are converted to saturated fats which have saturated carbons.

(b)  When an ester is heated with sodium hydroxide solution, ester gets hydrolyzed (breaks down) to form the parent alcohol and sodium salt of carboxylic acid.CH3COOCH3 + NaOH → CH3COONa+CH3OH

Q.5. Esters are sweet smelling substances and are used in making perfumes. Suggest one activity and the reaction involved for the preparation of ester with a well labelled diagram.Ans.Aim:Materials Required : Beaker, water, test tube, ethanol, acetic acid, conc. H2SO4, tripod stand, burner, wire gauze, etc.Method:1. Take 2 ml of ethanol in a test tube.2. Add 2 ml of ethanoic acid (acetic acid) into it.3. Add few drops of cone. H2SO4.4. Warm it in a beaker containing water.5. Observe the smell of the products formed. 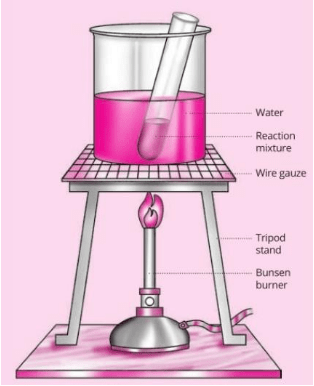 Fig: Reaction of dil. CH3COOH and Ethonal in the presence of conc. H2SO4 - formation of ester

Conclusion: Carboxylic acid reacts with alcohol in presence of conc. H2SO4, which acts as a dehydrating agent to form esters.Q.6. A compound ‘C’ (molecular formula, C2H4O2) reacts with Na-metal to form a compound ‘R’ and evolves a gas which burns with a pop sound.Compound ‘C' on treatment with an alcohol ‘A’ in presence of an acid forms a sweet smelling compound ‘S’ (molecular formula C3H6O2). On addition of NaOH to ‘C’, it also gives R’ and water. ‘S’ on treatment with NaOH solution gives back ‘R’ and 'A'. Identify ‘C’, ‘R' ‘A’, ‘S ’ and write down the reactions involved.Ans.

‘C’ is ethanoic acid, ‘R’ is sodium ethanoate, ‘A’ is methanol and ‘S’ is methyl ethanoate.Q.7. Look at figure and answer the following questions: (a) What change would you observe in the calcium hydroxide solution taken in tube ‘B' ?(b) Write the reaction involved in test tubes ‘A’ and ‘B’ respectively.(c) If ethanol is given instead of ethanoic acid, would you expect the same change?(d) How can a solution of lime water be prepared in the laboratory? 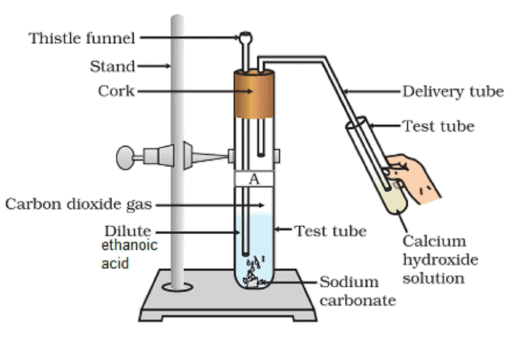 The reaction is called dehydration.

The reaction is called oxidation.Q.9. Draw the possible isomers of compound with molecular formula C3H6O and also give their electron dot structures. [CBSE Sample Paper 2018]Ans: C3H6O represents aldehyde as well as ketone. 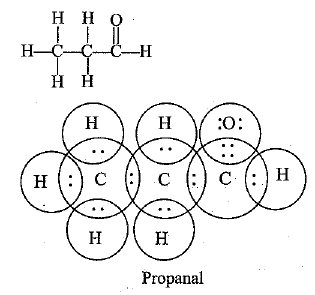 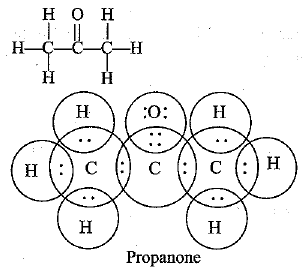 (b) Those reactions in which oxygen is added or hydrogen is removed are called oxidation reactions, e.g.

(d) Saponification reaction: When an ester reacts with sodium hydroxide to form sodium salt of carboxylic acid and alcohol, it is called saponification, e.g.

Q.11. An organic compound ‘A’ on heating with conc. H2SO4 forms a compound B, which on addition with 1 mole of hydrogen in presence of Ni forms a compound ‘C' One mole of compound ‘C’ on combustion forms two moles of CO2 and 3 moles of H2O. Identify the compounds A, B and C and write the chemical equation of the reactions involved. [HOTS]Ans. The compounds are as follows:A—Ethanol, B—Ethene, C—Ethane 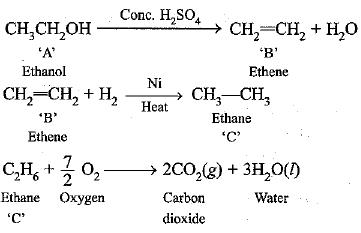