Q.1. Organisms at a higher trophic level have less energy available. Comment.Ans. The transfer of energy follows 10 per cent law – only 10 percent of the energy is transferred to each trophic level from the lower trophic level. So, higher trophic level have less energy as- compared to lower trophic level.Q.2. The number of trophic levels in an ecosystem are limited. Comment.Ans. In a food chain, only 10% of the total amount of energy is passed on to the next trophic level from the previous trophic level. So, there is a decrease in the amount of energy available at the successive trophic levels. As we move higher up in the food chain the amount of energy diminishes to a level at which it cannot sustain any trophic level, thereby limiting the number of trophic levels.Q.3. Is an aquarium a complete ecosystem?Ans. Aquarium has all the biotic and abiotic components of an ecosystem, so, aquarium is a complete ecosystem.Q.4. What could be the reason for the faster rate of decomposition in the tropics?Ans. The rate of decomposition is regulated by climatic factors like temperature and soil moisture as they have an effect on the activities of soil microbes. The tropics with its hot and humid climatic condition provides an environment which is ideal for the microbes to speed up the process of decomposition.Q.5. Human activities interfere with carbon cycle. List any two such activities.Ans. Human activities have significantly influenced the carbon cycle. Rapid deforestation and massive burning of fossil fuel for energy and transport have significantly increased the rate of release of carbon dioxide into the atmosphere.Q.6. Flow of energy through various trophic levels in an ecosystem is unidirectional and non-cyclic. Explain.Ans. The energy from the sun reaches the food chain through the primary producers (plants). This energy is passed on through successive trophic levels in the food chain. The energy transfer in the food chain follows the 10 percent law where in only 10% of the energy is transferred from one trophic level to the next successively. So, the movement of energy is only in one direction from lower to higher trophic level.Q.7. Apart from plants and animals, microbes form a permanent biotic component in an ecosystem. While plants have been referred to as autotrophs and animals as heterotrophs, what are microbes referred to as? How do the microbes fulfill their energy requirements?Ans. Microbes are referred to as heterotrophs and saprotrophs. They fulfill their energy requirement by feeding on dead remains of plants and animals through the process of decomposition.Q.8. Poaching of tiger is a burning issue in today's world. What implication would this activity have on the functioning of the ecosystem of which the tigers are an integral part?Ans.  Poaching (hunting) of tiger disturbs the ecological balance in ecosystem. Tigers are important predator of forest. Predator keeps prey population under control. Due to hunting of tiger its population decreases, hence the population of deer (prey) increases and interspecific competition occurs between them. Due to increase in prey population (that feeds on vegetation/grass), vegetation destroyed rapidly which causes ecological disturbance.Q.9. In relation to energy transfer in ecosystem, explain the statement "10 kg of deer's meat is equivalent to 1 kg of lion's flesh".Ans. Transfer of energy in an ecosystem follow 10% law, i.e., only 10% energy is transferred from one trophic level to higher trophic level. So, if lion feeds on deer than 10 kg of deer’s meat will form 1 kg of lion’s flesh.Q.10. Primary productivity varies from ecosystem to ecosystem. Explain?Ans. Primary productivity varies from ecosystem to ecosystem because it depends on the plant species inhabiting the area and their photosynthetic activity. It also depend on various environmental factors.Q.11. Sometimes due to biotic/abiotic factor the climax remain in a particular seral stage (pre climax) without reaching climax. Do you agree with this statement. If yes give a suitable example.Ans. It is true that any change in the abiotie/biotic factor will arrest a particular serai stage leading to a pre-climax condition before the climax stage is achieved. This can happen in cases of forest fires, landslides, changes in soil characteristics, increase in herbivore population leading to overgrazing.Q.12. What is an incomplete ecosystem? Explain with the help of suitable example.Ans. An ecosystem is a functional unit with biotic and abiotic factors interacting with one another resulting in a physical structure. Absence of any component will make an ecosystem incomplete as it will hinder the functioning of the ecosystem. Examples of such an ecosystem can be a fish tank or deep aphotic zone of the oceans where producers are absent.Q.13. What are the shortcomings of ecological pyramids in the study of ecosystem?Ans. The ecological pyramid assumes a simple food chain and does not accommodate food webs. Thereby,’ it does not take into account the fact that species may belong to two or more trophic levels at a time. Also saprophytes despite their vital role in ecosystem are given no place in the ecological pyramids.Q.14. How do you distinguish between humification and mineralisation?Ans. Humification leads to accumulation of a dark coloured amorphous substance called humus that is highly resistant to microbial action and undergoes decomposition at an extremely slow rate. Being colloidal in nature it serves as a reservoir of nutrients . The humus is further degraded by some microbes and release of inorganic nutrients occur by the process known as mineralisation.Q.15. Fill in the trophic levels (1, 2, 3 and 4) in the boxes provided in the figure. 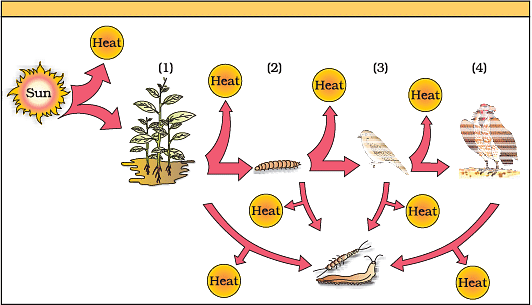 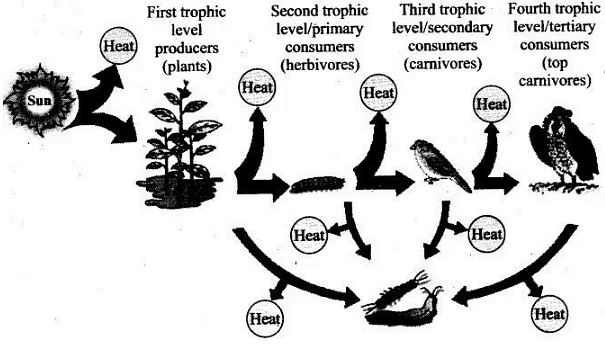 Q.16. The rate of decomposition of detritus is affected by the abiotic factors like availability of oxygen, pH of the soil substratum, temperature etc. Discuss.Ans. The decomposition of detritus is due to activities of micro-organisms. The rate of growth of microbes is affected by temperature. The pH of substratum affects the composition of microbes (acidophiles / basophiles) which degrade the dead organic matter. If oxygen is present, aerobic degradation occurs. In the absence of oxygen anaerobiosis sets in and there will be incomplete degradation. Also, the degradation is due to activity of exo enzymes secreted by the microbes and the activity of enzyme is affected by factors such as temperature etc. 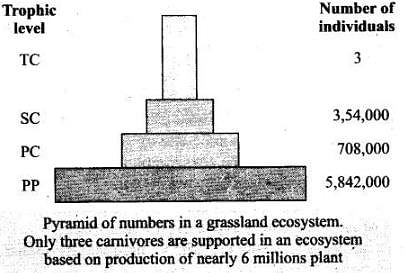 (ii) In Grassland ecosystem only 3 top carnivores are supported in an ecosystem based on production of nearly 6 million plants. (iii) Pyramid of number in grassland or forest or pond ecosystem is upright.

(vi) Among the grassland, pond and forest ecosystem, the number of primary producers per unit area would be maximum in pond ecosystem.Pyramid of Biomass(vii) Total amount of living material at various trophic level of a food chain is depicted by pyramid of biomass. 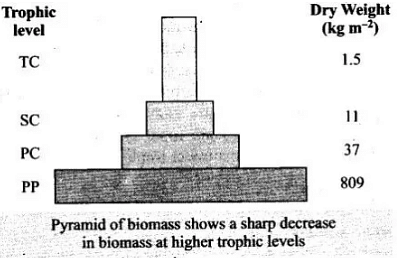 Q.6. Given below is a list of autotrophs and heterotrophs. With your knowledge about food chain, establish various linkages between the organisms on the principle of ‘eating and being eaten’. What is this inter-linkage established known as?Algae, hydrilla, grasshopper, rat, squirrel, crow, maize plant, deer, rabbit, lizard, wolf, snake, peacock, phytoplankton, crustaceans, whale, tiger, lion, sparrow, duck, crane, cockroach, spider, toad, fish, leopard, elephant, goat, Nymphaea, Spirogyra.Ans. Primary Producer’s (First trophic level): Algae, Hydrilla, maize plant, Phytoplankton, Nymphaea, Spirogyra.Primary Consumer (Second trophic level): Crustaceans, grasshopper, deer, mouse, squirrel, rabbit, elephant, goat.Secondly Consumer (Third trophic level): Spider, cockroach, lizard, wolf, snake, toad, fish, crane.Top carnivore (Fourth trophic level): Lion, Tiger.Q.7. “The energy flow in the ecosystem follows the second law of thermodynamics.” Explain.Ans. Ecosystems need a constant supply of energy to synthesise the molecules they require, to counteract the universal tendency toward increasing disorderliness. Hence, ecosystems are not exempt from the Second Law of thermodynamics.Q.8. What will happen to an ecosystem if:(a) All producers are removed;(b) All organisms of herbivore level are eliminated; and(c) All top carnivore population is removedAns. (a) Reduction in primary productivity. No biomass available for consumption by higher trophic levels / heterotrophs(b) Increase in primary productivity and biomass of producers. Carnivores population will subsequently dwindle due to food shortage.(c) Increase in number of herbivores• Overgrazing by herbivores• DesertificationQ.9. Give two examples of artificial or man made ecosystems. List the salient features by which they differ from natural ecosystems.Ans. Crop fields and an aquarium considered as man-made ecosystems. In artificial ecosystems the biotic and abiotic components of ecosystems are maintained artificially by regular feeding and clearing of aquarium and regular irrigation and sowing of seeds in crop field ecosystem. Natural ecosystem self sustains biotic and abiotic components of an ecosystem.Q.10. The biodiversity increases when one moves from the pioneer to the climax stage. What could be the explanation?Ans. In the successive serai stages there is a change in the diversity of species of organisms, increase in the number of species and organisms as well as an • increase in the total biomass. Description of ecological succession usually focuses on changes in vegetation. However, these vegetational changes in turn affect food and shelter for various types of animals. Thus, as succession proceeds, the numbers and types of animals and decomposers also change.Q.11. What is a biogeochemical cycle. What is the role of the reservoir in a biogeochemical cycle. Give an example of a sedimentary cycle with reservoir located in earth’s crust.Ans. The movement of nutrient elements through the various components of an ecosystem is called nutrient cycling. Another name of nutrient cycling is biogeochemical cycles (bio: living organism, geo: rocks, air, water).Nutrient cycles are of two types: (a) gaseous and(b) sedimentaryThe function of the reservoir is to meet with the deficit which occurs due to imbalance in the rate of influx and efflux. For the sedimentary cycle (Example: sulphur and phosphorus cycle), the reservoir is located in Earth’s crust.Q.12. What will be the P/R ratio of a climax community and a pioneer community. What explanation could you offer for the changes seen in P/R ratio of a pioneer community and the climax community.Ans. P/R (Production/Respiration) ratio shows the relationship between gross production and respiration.In climax community the P/R ratio will be 1. In pioneer community the P/R ratio will be more than one.