The document NCERT Exemplar: Heredity & Evolution Class 10 Notes | EduRev is a part of the Class 10 Course Science Class 10.
All you need of Class 10 at this link: Class 10

Try yourself:Q.3. A cross between a tall plant (TT) and short pea plant (tt) resulted in progeny that were all tall plants because
Explanation

In a monohybrid cross, only dominant characters are expressed in first progeny.

View Solution
Try yourself:Q.4. Which of the following statement is incorrect?
Explanation

Every protein enzymes and hormones are controlled by specific gene whereas fats are not controlled by gene hence option d is a wrong statement.

View Solution
Q.5. If a round, green seeded pea plant (RR yy) is crossed with wrinkled, yellow seeded pea plant, (rr YY) the seeds produced in the F1 generation are(a) round and yellow(b) round and green(c) wrinkled and green(d) wrinkled and yellowAns: (a)Explanation: Round and yellow are the dominant characters hence in f1 generation all seeds will be round and yellow.Q.6. In human males, all the chromosomes are paired perfectly except one. This/these unpaired chromosome is/are(i) large chromosome(ii) small chromosome(iii) Y-chromosome(iv) X-chromosome(a) (i) and (ii)(b) (iii) only(c) (iii) and (iv)(d) (ii) and (iv)Ans: (c)Explanation: These are sex-determining chromosomes that are not paired perfectly due to half size of the Y chromosome.
Try yourself:Q.7. The maleness of a child is determined by
Explanation

View Solution
Try yourself:Q.8. A zygote which has an X-chromosome inherited from the father will develop into a
Explanation

View Solution
Q.9. Select the incorrect statement(a) Frequency of certain genes in a population change over several generations resulting in evolution(b) Reduction in weight of the organism due to starvation is genetically controlled(c) Low weight parents can have heavyweight progeny(d) Traits which are not inherited over generations do not cause evolutionAns: (b)Explanation: Option b) is a wrong statement because weight loss and gain are controlled by external factors and they are not controlled genetically.Q.10. New species may be formed if(i) DNA undergoes significant changes in germ cells(ii) chromosome number changes in the gamete(iii) there is no change in the genetic material(iv) mating does not take place(a) (i) and (ii)(b) (i) and (iii)(c) (ii), (iii) and (iv)(d) (i), (ii) and (iii)Ans: (a)Explanation: Evolution will not take place without change and variation the genetic material. Hence change in genetic material and variation in chromosome is required for the evolution of new species.Q.11. Two pea plants one with round green seeds (RRyy) and another with wrinkled yellow (rrYY) seeds produce F1 progeny that have round, yellow (RrYy) seeds. When F1 plants are selfed, the F2 progeny will have a new combination of characters. Choose the new combination from the following (i) Round, yellow (ii) Round, green (iii) Wrinkled, yellow (iv) Wrinkled, green (a) (i) and (ii) (b) (i) and (iv) (c) (ii) and (iii) (d) (i) and (iii)Ans: (c)Explanation: 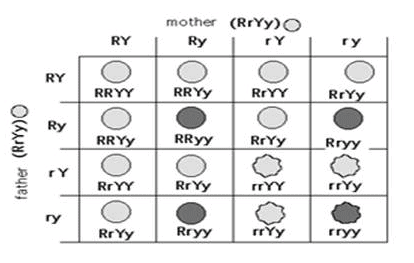 Try yourself:Q.12. A basket of vegetables contains carrot, potato, radish and tomato. Which of them represent the correct homologous structures?
Explanation

Tendril of a pea plant and phylloclade of Opuntia are homologous because they have similar design and origin.

Q.14. If the fossil of an organism is found in the deeper layers of earth, then we can predict that(a) the extinction of organism has occurred recently(b) the extinction of organism has occurred thousands of years ago(c) the fossil position in the layers of earth is not related to its time of extinction(d) time of extinction cannot be determinedAns: (b)Explanation: Older fossils are found deep in the earth. Hence option b) is the right answer.Q.15. Which of the following statements is not true with respect to variation?(a) All variations in a species have an equal chance of survival(b) Change in genetic composition results in variation(c) Selection of variants by environmental factors forms the basis of evolutionary processes.(d) Variation is minimum in asexual reproductionAns: (a)Explanation: Statement a) is wrongs because only useful variation have a chance of survival. Nature choose the fittest variation to survive.Q.16. A trait in an organism is influenced by(a) paternal DNA only(b) maternal DNA only(c) both maternal and paternal DNA(d) neither by paternal nor by maternal DNAAns: (c)Explanation: DNA is contributed to an offspring by both the parents hence traits are contributed by both the parents.Q.17. Select the group which shares the maximum number of common characters(a) two individuals of a species(b) two species of a genus(c) two genera of a family(d) two genera of two familiesAns: (a)Explanation: Species is the lowest taxon hence members of same species share a maximum number of common characteristics.

Try yourself:Q.18. According to the evolutionary theory, the formation of a new species is generally due to
Explanation

New species are formed due to variation in the DNA for several generations. Asexual reproduction will not result in variation as there are no gametes involved. ) Movement of individuals from one habitat to another will not affect DNA change hence it cannot be the right answer.

View Solution
Try yourself:Q.19. From the list given below, select the character which can be acquired but not inherited
Explanation

Person’s food habits decide the nature of the body. Regular exercise helps in building a muscular body. Body nature is not transferred to offspring hence the size of the body is not inherited.

Q.20. The two versions of a trait (character) which are brought in by the male and female gametes are situated on(a) copies of the same chromosome(b) two different chromosomes(c) sex chromosomes(d) any chromosomeAns: (b)Explanation: This is the reason behind the expression of one progeny in one version and other versions in another progeny.Q.21. Select the statements that describe characteristics of genes(i) genes are a specific sequence of bases in a DNA molecule(ii) a gene does not code for proteins(iii) in individuals of a given species, a specific gene is located on a particular chromosome(iv) each chromosome has only one gene(a) (i) and (ii)(b) (i) and (iii)(c) (i) and (iv)(d) (ii) and (iv)Ans: (b)Explanation: Statement ii) is wrong because genes code for specific proteins. Statement 4 is wrong because chromosomes have any number of genes.Q.22. In peas, a pure tall plant (TT) is crossed with a short plant (tt). The ratio of pure tall plants to short plants in F2 is(a) 1 : 3(b) 3: 1(c) 1: 1(d) 2: 1Ans: (b)Explanation: A cross between pure tall plant (TT) and short plant (tt) would produce progenies with following genotypes. TT(Pure tall), tt( Pure short) andTt ( Mixed tall). This makes the ratio between tall and short plants is 3:1.Q.23. The number of pair (s) of sex chromosomes in the zygote of humans is(a) one(b) two(c) three(d) fourAns: (a)Explanation: 23rd pair of chromosome determines the sex of the offspring hence it is called a sex chromosome.

Try yourself:Q.24. The theory of evolution of species by natural selection was given by
Explanation

View Solution
Try yourself:Q.25. Some dinosaurs had feathers although they could not fly but birds have feathers that help them to fly. In the context of evolution, this means that
Explanation

Dinosaurs had feathers but could not fly using them. Birds, later adapted the feathers for flight. Since dinosaurs were reptiles, this means that birds have evolved from them.

Inbreeding depression: This lead to negative population growth which is detrimental to the survival of the species with a smaller population.Q.32. What are homologous structures? Give an example. Is it necessary that homologous structures always have a common ancestor?Solution: Homologous structures are those which has a common basic structure and performs different functions. e.g. forelimbs of reptiles, amphibians and mammals. If they don’t have common ancestry they are called as analogous structure.Q.33. Does the occurrence of the diversity of animals on earth suggest their diverse ancestry also? Discuss this point in the light of evolution.Solution: In spite of the fact that animals have a different variety of structures, they do not have a common ancestry. This is because common ancestry may greatly limit the extent of diversity. Many of the animals are inhabiting the same habitat, their evolution by geographical isolation and speciation is also not likely. Hence common ancestry for all the animals is not the likely theory.Q.34. Give the pair of contrasting traits of the following characters in pea plant and mention which is dominant and recessive(i) yellow seed (ii) round seedSolution: (i) Yellow- dominant, Green- Recessive(ii) Round-dominant, Wrinkled-RecessiveQ.35. Why did Mendel choose pea plant for his experiments?Solution: Mendel chosen pea plant for his experiments for the following reasons:

Q.37. Does geographical isolation of individuals of a species lead to the formation of a new species? Provide a suitable explanation.Solution: Geographical isolation of individual of a species leads to genetic drift. This limits the sexual reproduction of the separated population. This results in separated individuals reproducing among themselves. This leads to the formation of a new variation. Accumulation and transfer of these variations through generation will lead to the formation of new species.Q.38. Bacteria have a simpler body plan when compared with human beings. Does it mean that human beings are more evolved than bacteria? Provide a suitable explanation.Solution: This is an issue of debate. It depends on the way we evaluate evolution. If the complexity of the body is a parameter then Human are far superior than bacteria. Bacteria has a cellular level of organization and humans have an organ level organization. On the other hand, if we consider the ability of survival bacteria have evolved more than human beings. Humans can live in any environment but with artificial protection. Humans cannot live in a harsher climate whereas bacteria can be found anywhere on earth. They can survive even harsh climates such as Hydrothermal vents, sulphur springs.Q.39. All the human races like Africans, Asians, Europeans, Americans and others might have evolved from a common ancestor. Provide a few evidences in support of this view.Solution: All humans races appear to be different but they have evolved from common ancestry. Following are the evidence to support this view.

Q.40. Differentiate between inherited and acquired characters. Give one example for each type.Solution:

Q.44. Study the following cross and showing self- pollination in F1, fill in the blank and answer the question that followsParents RRYY x rryyRound, yellow wrinkled greenF1 — Rr Yy x ?Round, yellowSolution: RrYy- Round yellowrryy

RRYYQ.45. In question 44, what are the combinations of character in the F2 progeny? What are their ratios?Solution: rryy

Q.47. Give reasons for the appearance of new combinations of characters in the F2 progeny. F1 plants have round and yellow seeds. Cross between generations can give rise to new combinations in F2 generation with round-yellow, round green, wrinkled yellow and wrinkled green in the ratio of 9 : 3 : 3: 1.This shows that the chances for the pea seed to be round or wrinkled do not depend on their chances to be yellow or green. Hence each pair of alleles is independent of the other pair. This is called an independent assortment.