Q.6. Characters that are transmitted from parents to offspring during reproduction show(a) only similarities with parents(b) only variations with parents(c) both similarities and variations with parents(d) neither similarities nor variationsAns: cQ.7. A feature of reproduction that is common to Amoeba, Spirogyra and Yeast is that(a) they reproduce asexually(b) they are all unicellular(c) they reproduce only sexually(d) they are all multicellularAns: aExplanation:Amoeba reproduce by binary fission, Spirogyra reproduce by fragmentation, yeast reproduce by budding.Q.8. In Spirogyra, asexual reproduction takes place by(a) breaking up of filaments into smaller bits(b) division of a cell into two cells(c) division of a cell into many cells(d) formation of young cells from older cells.Ans: aExplanation:Spirogyra reproduce by fragmentation. Spirogyra simply breaks up into smaller pieces upon maturation. These pieces or fragments grow into new individuals

Q.9. The ability of a cell to divide into several cells during reproduction in Plasmodium is called(a) budding(b) reduction division(c) binary fission(d) multiple fissionAns: dExplanation:Plasmodium divide into many daughter cells by binary multiple fission. In Multiple fission nucleus of the cell divides multiple times by mitosis then separates to create multiple daughter cells.Q.10. The correct sequence of reproductive stages seen in flowering plants is(a) gametes, zygote, embryo, seedling(b) zygote, gametes, embryo, seedling(c) seedling, embryo, zygote, gametes(d) gametes, embryo, zygote, seedlingAns: aExplanation:Gametes fuse to form a zygote during fertilization. After fertilization-embryo will be formed which will lead to seedling in plants.

Q.14. Factors responsible for the rapid spread of bread mould on slices of bread are(i) large number of spores(ii) availability of moisture and nutrients in bread(iii) presence of tubular branched hyphae(iv) formation of round shaped sporangia(a) (i) and (iii)(b) (ii) and iv)(c) (i) and (ii)(d) (iii) and (iv)Ans: cExplanation:A large number of spores ensure a few spores survive even in adverse conditions. Availability of moisture and nutrients in the bread provides the necessary environment for the spore to grow into mould.Q.15. Length of pollen tube depends on the distance between(a) pollen grain and the upper surface of the stigma(b) pollen grain on the upper surface of stigma and ovule(c) pollen grain in anther and upper surface of stigma(d) upper surface of stigma and lower part of styleAns: dExplanation:Length of pollen tube ensures pollens reach the stigma to conduct pollination.Q.16. Which of the following statements are true for flowers?(i) Flowers are always bisexual(ii) They are the sexual reproductive organs(iii) They are produced in all groups of plants(iv) After fertilisation, they give rise to fruits(a) (i) and (iv)(b) (ii) and (iii)(c) (i) and (iii)(d) (ii) and (iv)Ans: dExplanation:Flowers are not always bisexual hence statement i) is wrong. Only angiosperms produce flowers hence statement iii) is wrong.Q.17. Which among the following statements are true for unisexual flowers?(i) They possess both stamen and pistil(ii) They possess either stamen or pistil(iii) They exhibit cross-pollination(iv) Unisexual flowers possessing only stamens cannot produce fruits(a) (i) and (iv)(b) (ii), (iii) and (iv)(c) (iii) and (iv)(d) (i), (iii) and (iv)Ans: bExplanation:Cross-pollination is necessary is unisexual flowers as they possess either stamen or pistil. Flowers possessing only stamens cannot produce fruits because fruit is a mature ovary.Q.18. Which among the following statements are true for sexual reproduction in flowering plants?(i) It requires two types of gametes(ii) Fertilisation is a compulsory event(iii) It always results in the formation of zygote(iv) Offspring formed are clones(a) (i) and (iv)(b) (i), (ii) and (iv)(c) (i), (ii) and (iii)(d) (i), (ii) and (iv)Ans: cExplanation:Off-springs produced from sexual reproduction cannot be clones hence statement iv) is wrong.

Q.19. In given Figure, the parts A, B and C are sequentially

(a) cotyledon, plumule and radicle(b) plumule, radicle and cotyledon(c) plumule, cotyledon and radicle(d) radicle, cotyledon and plumuleAns: cQ.20. Offspring formed as a result of sexual reproduction exhibit more variations because(a) sexual reproduction is a lengthy process(b) genetic material comes from two parents of the same species(c) genetic material comes from two parents of different species(d) genetic material comes from many parentsAns: bExplanation:In sexual reproduction zygote is formed by gametes produces by a male and a female. A male and a female gamete fuse to form a zygote which fertilizes to produce new offspring. Because of the contribution of two parents, off-springs incur more variations.Q.21. Reproduction is essential for living organisms in order to(a) keep the individual organism alive(b) fulfil their energy requirement(c) maintain growth(d) continue the species generation after generationAns: dExplanation:Reproduction is essential to the lineage of the species whereas other life processes are essential to keep the organism alive.Q.22. During adolescence, several changes occur in the human body. Mark one change associated with sexual maturation in boys(a) loss of milk teeth(b) increase in height(c) cracking of voice(d) weight gainAns: cExplanation:

Q.23. In human females, an event that reflects the onset of the reproductive phase is(a) growth of body(b) changes in hair pattern(c) change in voice(d) menstruationAns: dExplanation:During adolescence Following changes occur in boys

Q.24. In human males, the testes lie in the scrotum, because it helps in the(a) process of mating(b) formation of sperm(c) easy transfer of gametes(d) all the aboveAns: bExplanation:Testes lying in the scrotum ensures the temperature of the testes remain lower than the body temperature. This helps in sperm production.

Q.25. Which among the following is not the function of testes at puberty?(i) formation of germ cells(ii) secretion of testosterone(iii) development of placenta(iv) secretion of estrogen(a) (i) and (ii)(b) (ii) and (iii)(c) (iii) and (iv)(d) (i) and (iv)Ans: cExplanation:Testis is a male reproductive organ but estrogen is produced in females. Placenta is formed in females during pregnancy.

Q. 1. In a bisexual flower inspite of the young stamens being removed artificially, the flower produces fruit. Provide a suitable explanation for the above situation.Ans. Removal of stamens of a bisexual flower will not affect pollination as its pistil is inact. Therefore, formation of fruit will take place as transfer of pollen grains from the anther of another flower to the stigma of flower will take place which causes cross-pollination.Q.2. Can you consider cell division as a type of reproduction in unicellular organism? Give one reason.Ans. Yes, because cell division in a unicellular organism results in the formation of two daughter cells, which means it produces more individuals of the organisms.For example, Amoeba is a simple unicellular organism that splits into two daughter cells.

Q.4. Explain how, offspring and parents of organisms reproducing sexually have the same number of chromosomes? 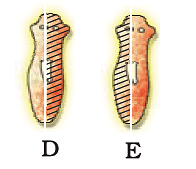 Q.9. From the internet, gather information about the chromosome numbers of five animals and five plants. Correlate the number with the size of organism and answer the following questions.(a) Do larger organisms have more number of chromosomes/cells?(b) Can organism with fewer chromosomes reproduce more easily than organisms with more number of chromosomes?(c) More the number of chromosomes/cells greater is the DNA contents. Justify.Ans. (a) No, there is no correlation between chromosome number and size of the individual.(b) No, chromosome number does not affect reproduction. Reproduction depends on environmental factors like nutrients availability, water source, etc.(c) Yes, since major component of chromosome is DNA, if there are more chromosomes in a cell means more DNA.Q.10. In tobacco plant, the male gametes have twenty four chromosomes. What is the number of chromosomes in the female gamete? What is the number of chromosomes in the zygote?Ans. The number of chromosomes in the female gamete is 24. The number of chromosomes in the zygote is 48.Q.11. Why cannot fertilisation take place in flowers if pollination does not occur?Ans. Pollination is essential for bringing the male gametes to meet the female gamete. Only after the arrival of pollen grains on stigma and entry of pollen tube into ovary, male gamete fuse with female gamete. In absence of pollination, there will be no male gamete to bring about fertilisation.Q.12. Is the chromosome number of zygote, embryonal cells and adult of a particular organism always constant? How is the constancy maintained in these three stages?Ans. Yes, the chromosome number of zygote, embryonal cells and adult of a particular organism is always constant. The constancy is maintained because the cells in all these three structures undergo only mitotic divisions.Q.13. Where is the zygote located in the flower after fertilisation?Ans. Zygote is located inside the ovule which is present in the ovary part of the pistil.Q.14. Reproduction is linked to stability of population of species. Justify the statement.Ans. In reproduction, DNA passes from one generation to the next. The copying of DNA takes place with consistency but with minor variations and this consistency leads to stability of species.Q.15. How are general growth and sexual maturation different from each other?Ans. General growth is the growth of different types of developmental process in the body like increase in height, weight gain, changes in shape and size of the body. Reproductive organs are less active during this phase.Sexual maturation is a set of changes in the body of an individual at puberty like cracking of voice, new hair patterns, development of breast in female, etc.Q.16. Trace the path of sperm during ejaculation and mention the gland and their functions associated with the male reproductive system.Ans. The sperms comes out from testis into the vas deferens and then pass through urethra before ejaculation.The secretions of seminal vesicle and prostate glands provide nutrition to the sperms and also facilitate their transport.Q.17. What changes are observed in the uterus if fertilisation does not occur?Ans. Following changes occur in the uterus if fertilization does not occur

Q.20. In the given Figure, label the parts and mention their functions 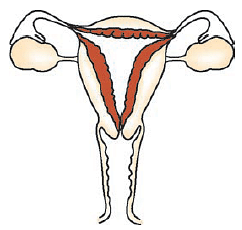 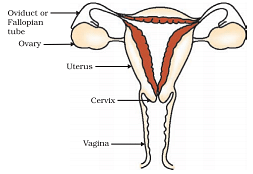 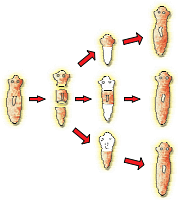 Regeneration of PlanariaHere the body of planaria cut into pieces and each piece has the ability to grow into a new organism. In the figure above the planaria body is cut into 3 pieces which regenerates into 3 individual cells.

Q.2. Write two points of difference between asexual and sexual types of reproduction. Describe why variations are observed in the offspring formed by sexual reproduction.

In sexual reproduction, we can find more variations when compared to asexual mode of reproduction. Following are the reasons for that.

Q.3. Distinguish between pollination and fertilisation. Mention the site and product of fertilisation in a flower. Draw a neat, labelled diagram of a pistil showing pollen tube growth and its entry into the ovule. 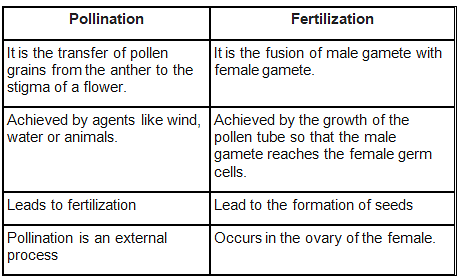 Ovary is the site of fertilization and pollination occurs external 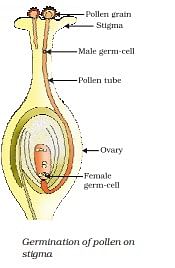 Q.4. Distinguish between a gamete and zygote. Explain their roles in sexual reproduction.Ans:

Q.5. Draw the diagram of a flower and label the four whorls. Write the names of gamete producing organs in the flower. 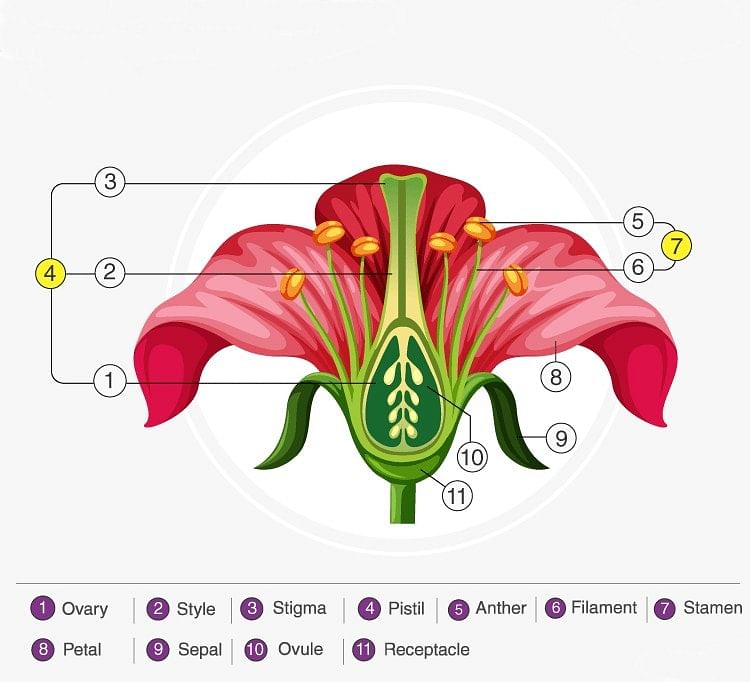 Q. 6. What is placenta? Mention its role during pregnancy?Ans: Placenta is a disc which is embedded in the uterine wall. It contains villi on the embryo’s side of the tissue. On the mother’s side are blood spaces, which surround the villi. This provides a large surface area for glucose and oxygen to pass from the mother to the embryo. The embryo gets nutrition from the mother’s blood with the help of placenta.

The developing embryo will also generate waste substances which can be removed by transferring them into the mother’s blood through the placenta.

Q.7. What are various ways to avoid pregnancy? Elaborate any one method.

Ans: Various ways to avoid pregnancy are given below

Below are the ways to prevent sexually transmitted diseases