Q.1. A cubic vessel (with faces horizontal + vertical) contains an ideal gas at NTP. The vessel is being carried by a rocket which is moving at a speed of 500m s–1 in vertical direction. The pressure of the gas inside the vessel as observed by us on the ground.(a) Remains the same because 500m s-1 is very much smaller than vrms of the gas.(b) Remains the same because motion of the vessel as a whole does not affect the relative motion of the gas molecules and the walls.(c) Will increase by a factor equal to (v2rms + (500)2)/ v2rms where vrms was the original mean square  velocity of the gas.(d) Will be different on the top wall and bottom wall of the vessel.

Q.2. mole of an ideal gas is contained in a cubical volume V, ABCDEFGH at 300 K (Figure). One face of the cube (EFGH) is made up of a material which totally absorbs any gas molecule incident on it. At any given time,

And the pressure on the faces is due to the total momentum to the faces. So, pressure on EFGH would be half that on ABCD.Q.3. Boyle’s law is applicable for an(a) Adiabatic process(b) Isothermal process(c) Isobaric process(d) Isochoric processAns. (b)Solution: Boyle’s law: For a given mass of an ideal gas at constant temperature, the volume of a gas is inversely proportional to its pressure. 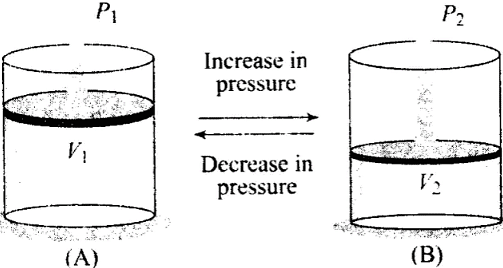 So we can say that when temperature is constant, Boyle’s law is applicable.i.e., PV= nRT= constant⇒ PV = constant (at constant temperature)i.e. p ∝ 1/V - [where, P = pressure. V= volume]So, this law is applicable for an isothermal process, in which temperature remain constant.Q.4. A cylinder containing an ideal gas is in vertical position and has a piston of mass M that is able to move up or down without friction in Figure. If the temperature is increased:

(a) Both p and V of the gas will change.(b) Only p will increase according to Charle’s law.(c) V will change but not p.(d) p will change but not V.Ans. (c)Solution: The situation is shown in the diagram where an ideal gas is contained in a cylinder, having a piston of mass M.According to the problem, piston can move up and down without friction. So, the only force present is weight of the piston.The pressure inside the gas will be:P = P0 + Mg/A = constantwhere P0 = Atmospheric pressureA = Area of cross-section of the pistonMg = Weight of pistonWeight of piston and atmospheric pressure are constant, hence pressure remains constant. 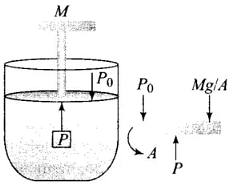 According to ideal gas law:PV = nRTAs the pressure remains constant, so if the temperature is increased, only the volume increases as the piston moves up without friction.Q.5. Volume versus temperature graphs for a given mass of an ideal gas are shown in Figure, at two different values of constant pressure. What can be inferred about the relation between P1 & P2? 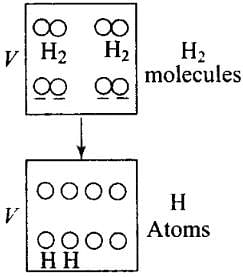 P = Pressure of gas, n = Number of molesR = Gas constant, T = Temperature PV = nRTAs volume (V) of the container is constant. Hence, when temperature (T) becomes 10 times, (from 300 K to 3000 K) pressure (P) also becomes 10 times, as P∝ T.Pressure is due to the bombardment of particles and as gases break, the number of moles becomes twice of initial, so n2 = 2n1 So P ∝ nT⇒

⇒ P2 = 20P1Hence, final pressure of the gas would be 20 times the pressure initially.Q.7. A vessel of volume V contains a mixture of 1 mole of Hydrogen and 1 mole of Oxygen (both considered as ideal). Let f1 (v)dv, denote the fraction of molecules with speed between v and (v + dv) with f2 (v)dv, similarly for oxygen. Then(a) f1(v) + f2 (v)= f (v) obeys the Maxwell’s distribution law.(b) f1( v), f2 (v) will obey Maxwell’s distribution law separately.(c) Neither f1 (v) nor f2 (v) will obey Maxwell’s distribution law.(d) f2 (v)  and f1 (v) will be the same.Ans. (c)Solution: Maxwell’s Law (or the Distribution of Molecular Speeds:(1) The vrms gives us a general idea of molecular speeds in a gas at a given temperature. This doesn’t mean that the speed of each molecule is vrms. Many of the molecules have speed less than vrms and many have speeds greater than vrms. (2) Maxwell derived equation gives the distribution of molecules in different speeds as follows:

The masses of hydrogen and oxygen molecules are different.

For a function f(v), the number of molecules dn = f[v), which are having speeds between v and v + dv.

The Maxwell-Boltzmann speed distribution function ( Nv = dn/dv depends on the mass of the gas molecules.

For each function f1(v) and f2(v), n will be different, hence each function f1(v) and f2(v) will obey Maxwell’s distribution law separately.Q.8. An inflated rubber balloon contains one mole of an ideal gas, has a pressure p, volume V and temperature T. If the temperature rises to 1.1 T, and the volume is increased to 1.05 V,  the final pressure will be(a) 1.1 P(b) P(c) Less than P(d) Between P and 1.1Ans. (d)Solution: According to the equation of ideal gas, PV= nRTP = pressureV = volumen = number of moles of gasesR = gas constantT = temperatureThus we have to rewrite this equation in such a way that no. of moles is given by,n = PV/RTAs number of moles of the gas remains fixed, hence, we can write:

Q.9. ABCDEFGH is a hollow cube made of an insulator (Fig.). Face ABCD has positive charge on it. Inside the cube, we have ionized hydrogen.The usual kinetic theory expression for pressure:

(a) Will be valid.(b) Will not be valid since the ions would experience forces other than due to collisions with the walls.(c) Will not be valid since collisions with walls would not be elastic.(d) Will not be valid because isotropy is lost.Ans. (b, d)Solution: According to the problem, ionized hydrogen is present inside the cube, they are having charge. Now, due to the presence of positive charge on the surface ABCD hydrogen ions would experience forces other than the forces due to collision with the walls of container. So, these forces must be of electrostatic nature. Hence, Isotropy of system is lost at only one face ABCD because of the presence of external positive charge. The usual expression for pressure on the basis of kinetic theory will be valid.Q.10. Diatomic molecules like hydrogen have energies due to both translational as well as rotational motion. From the equation in kinetic theory pV = 2/3 E, E is(a) The total energy per unit volume.(b) Only the translational part of energy because rotational energy is very small compared to the translational energy.(c) Only the translational part of the energy because during collisions with the wall pressure relates to change in linear momentum.(d) The translational part of the energy because rotational energies of molecules can be of either sign and its average over all the molecules is zero.Ans. (c)Solution: According to kinetic theory equation, PV = 2/3 E [where P= Pressure V = volume]E is representing only translational part of energy. Internal energy contains all types of energies like translational, rotational, vibrational etc. But the molecules of an ideal gas is treated as point masses in kinetic theory, so its kinetic energy is only due to translational motion.

Point mass does not have rotational or vibrational motion. Here, we assumed that the walls only exert perpendicular forces on molecules. They do not exert any parallel force, hence there will not be any type of rotation present. The wall produces only change in translational motion.Q.11. In a diatomic molecule, the rotational energy at a given temperature(a) Obeys Maxwell’s distribution.(b) Have the same value for all molecules.(c) Equals the translational kinetic energy for each molecule.(d) Is (2/3)rd the translational kinetic energy for each molecule.Ans. (a, d)Solution: Consider a diatomic molecule along z-axis so its rotational energy about z-axis is zero. So energy of diatomic molecule.

(as moment of inertia along z axis is zero) 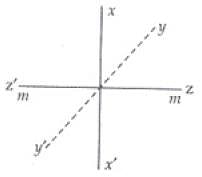 The independent terms in the above expression is 5. As we can predict velocities of molecules by Maxwell’s distribution. Hence the above expression also obeys Maxwell’s distribution. As 2 rotational and 3 translational energies are associated with each molecule. So the rotational energy at given temperature is 2/3 of its translational Kinetic energy of each molecule.Q.12. Which of the following diagrams (Figure) depicts ideal gas behaviour? 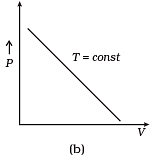 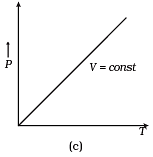 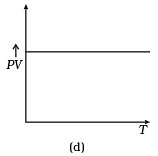 (b) When T = constantFrom (i) PV = constantSo, graph of P versus V will be a rectangular hyperbola. Hence this graph is wrong.The correct graph is shown below:(c) When V = constant.From (i) P ∝ TSo, the graph is a straight line passing through the origin.(d) From (i) PV ∝ T⇒ PV/T = constantSo, graph of PV versus T will be a straight line parallel to the temperature axis(x-axis).i.e., slope of this graph will be zero.So, (d) is not correct.Q.13. When an ideal gas is compressed adiabatically, its temperature rises: the molecules on the average have more kinetic energy than before. The kinetic energy increases:(a) Because of collisions with moving parts of the wall only.(b) Because of collisions with the entire wall.(c) Because the molecules gets accelerated in their motion inside the volume.(d) Because of redistribution of energy amongst the molecules.Ans. (a)Solution: Since the gas is ideal and the collisions of the molecules are elastic. When the molecules collide with the moving parts of the wall, its kinetic energy increases. But the total kinetic energy of the system will remain conserved. When the gas is compressed adiabatically, the total work done on the gas increases, its internal energy which in turn increases the KE of gas molecules and hence, the collisions between molecules also increases.

Q.5. A gas mixture consists of 2.0 moles of oxygen and 4.0 moles of neon at temperature T. Neglecting all vibrational modes, calculate the total internal energy of the system. (Oxygen has two rotational modes.)Ans. According to the problem:n0 = 2 moles, nn = 4 molesTemperature of the gas = TSince oxygen is a diatomic gas. So, the degree of freedom associated with the molecules of the oxygen is 5.Energy (total internal) per mole of the gas = 5/2 RT[R = universal gas constantT = temperature]For 2 moles of the gas total internal energy = 2 x 5/2 RT = 5RT  ...(i)Neon (Ne) is a monoatomic gas having 3 degrees of freedom.Energy per mole = 3/2RTHence, Energy = 4 x 3/2 RT = 6RT ….(ii)[Using Eqs. (i) and (ii)]Total energy = 5RT = 6RT= 11RTQ.6. Calculate the ratio of the mean free paths of the molecules of two gases having molecular diameters 1A and 2A. The gases may be considered under identical conditions of temperature, pressure and volume.Ans. Mean Free Path:The distance travelled by a gas molecule between two successive collisions is known as free path.

where d = Diameter of the molecule,n = Number of molecules per unit volume 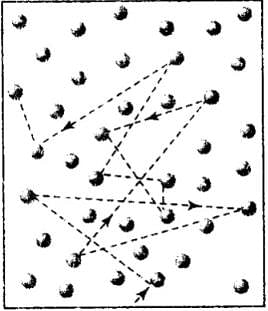 The document NCERT Exemplar: Kinetic Theory - 1 - Notes | Study Physics Class 11 - NEET is a part of the NEET Course Physics Class 11.
All you need of NEET at this link: NEET
Attempt Now
Join Course