Q.1. A ball is travelling with uniform translatory motion. This means that(a) It is at rest.(b) The path can be a straight line or circular and the ball travels with uniform speed.(c) All parts of the ball have the same velocity (magnitude and direction) and the velocity is constant.(d) The centre of the ball moves with constant velocity and the ball spins about its centre uniformly.Ans. (c)Solution.When a body moves in such a way that the linear distance covered by each particle of the body is same during the motion, then the motion is said to be translatory or translation motion.Translatory motion can be, again of two types viz., curvilinear (shown in fig. (a)) or rectilinear (shown in fig. (b)), accordingly as the paths of every constituent particles are similarly curved or straight line paths. Here it is important that the body does not change its orientation. Here we can also define it further in uniform and non-uniform translatory motion. Here figure(b) is uniformly translatory motion. 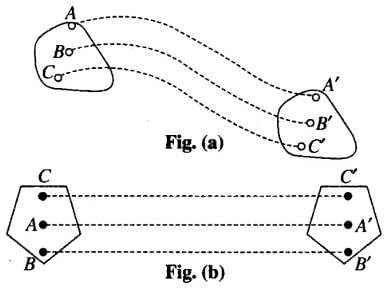 So torque must be zero.Hence, for uniform motion force and torque, both must be zero.So, It verifies the option (b).Q.3. A cricket ball of mass 150 g has an initial velocity

and a final velocity

after being hit. The change in momentum (final momentum-initial momentum) is (in kg m s1)(a) zero(b)

in law of conservation of momentum is zero.i.e.,

So in this case direction of force acting on player will be the same as the direction of change in momentum. Now to understand this in better let’s look the image below 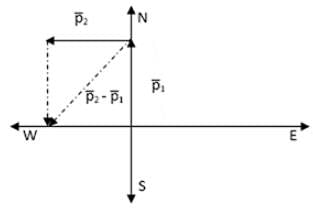 Therefore, option (a) is correct.Q.8. A body with mass 5 kg is acted upon by a force

If its initial velocity at t = 0 is

Therefore, option (b) is correct.Q.9. A car of mass m starts from rest and acquires a velocity along east

2nd derivative of x(t) w.r.t. time will give velocity

Here, this force is obviously time dependent so force is not constant hence option (d) is correct.Now let’s look to option (a) i.e. At

so option(b) is also correct.Option (c) is absolutely wrong as we have above found that force is acting.Option (e) is also wrong because we have already calculated the impulse.Q.11. In Fig, the co-efficient of friction between the floor and the body B is 0.1. The co-efficient of friction between the bodies B and A is 0.2. A force F is applied as shown on B. The mass of A is m/2 and of B is m. Which of the following statements are true?

Let acceleration in body A and B is ‘a’.Body A will move along with body B by force F till the force of friction between surface of A and B is larger or equal to zero.

Now taking system A+B then acceleration will be

So force on A

If FAB is equal or smaller than f2 then body A will move along with body B.

N = Reaction force by B on A

[N2 = Normal reaction on B along with A by surface]

Given force in option (d) 0.1mg Newton <0.25mg Newton. So body A and B will not move i.e.Bodies A and B will remain in rest hence option (d) is also correct.Q.12. Mass m1 moves on a slope making an angle θ with the horizontal and is attached to mass m2 by a string passing over a frictionless pulley as shown in Fig. The co-efficient of friction between m1 and the sloping surface is µ. 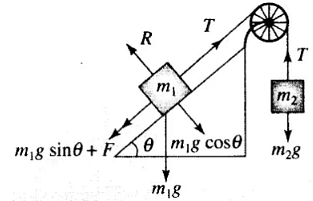 Now from figure taking whole as a system then

when m1 will up and m2 will down.Putting f in this equation

from this option (a) is totally wrong while option (b) is correct.Now if body m1 moves down and m2 moves up then, direction of friction force (f) becomes upward (opp. to motion).

(c) For A to move up the plane, θ2 must always be greater than θ1.(d) B will always slide down with constant speed.Ans. (b, c)Solution.

In this problem first we have to decide the direction of motion. Let block A moves up the plane friction force on A will be downward (along the plane) as shown.

According to the problem, balls are identical.

As they are perpendicular, cos 90° = 0So resultant will be

Let θ1 be the angle between F and F1.

Q.1. A girl riding a bicycle along a straight road with a speed of 5 m s–1 throws a stone of mass 0.5 kg which has a speed of 15 m s–1 with respect to the ground along her direction of motion. The mass of the girl and bicycle is 50 kg. Does the speed of the bicycle change after the stone is thrown? What is the change in speed, if so?Ans. Let m1 and m2 be the mass of girl with bicycle and stone respectively i.e. m1 = 50kg & m2 = 0.5kgAlso we have given u1 = 5m/s, u2 = 5m/s and v2 = 15 m/s and we have to find v1As we know by law of conservation of momentum initial momentum (girl, bicycle, stone) = final momentum (cycle and girl) + stone

Therefore, the speed of cycle and girl decreased by 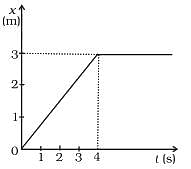 Ans. As we know impulse is change in momentum which can be written in terms of force

We have given mass of body m=2 kg, initial velocity (v1) at t=0 is zero. Now in the interval t ≥ 0 to t ≤ 4 x-t graph is straight line that mean velocity of body will remain constant.

So from above observation impulse at t = 0 increased by  + 1.50 kg ms-1 and at t = 4 it is decreased by -150 kg ms-1.Q.4. A person driving a car suddenly applies the brakes on seeing a child on the road ahead. If he is not wearing seat belt, he falls forward and hits his head against the steering wheel. Why?Ans. When a person applies breaks suddenly, the lower part of person slows rapidly with the car, but the upper part of driver continue to move with same speed in the same direction due to the inertia of motion and his head car hit with steering.Q.5. The velocity of a body of mass 2 kg as a function of t is given by

Find the momentum and the force acting on it, at time t = 2s.Ans. we have mass m = 2kg and

Hence momentum and force at 2 sec will be

respectively.Q.6. A block placed on a rough horizontal surface is pulled by a horizontal force F. Let f be the force applied by the rough surface on the block. Plot a graph of f versus F.Ans. Let f (frictional force) at y-axis and F at x-axis 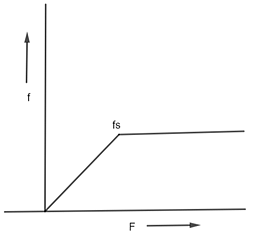 Now when a small force F1 is applied on a heavier box, this box does not move, at this state, force of friction f1 is equal to F1. Increasing force on box does not move till F = fs (the maximum static frictional or limiting force).After force fs, the frictional force decrease i.e. less kinetic force Fk < fs is applied on body and it starts to move with less frictionIn diagram A is equivalent to limiting frictional force and a B is equivalent to kinetic frictional force.Q.7. Why are porcelain objects wrapped in paper or straw before packing for transportation?Ans. Porcelain (or glass) objects are brittle in nature and can crack even small jerk on it. During transportation sudden jerks or even fall takes place.When objects are packed in paper or straw etc. the objects takes more time to stop or change velocity during jerks (due to breaks, or uneven road) so acceleration (v - u)/t decreased. So the force on objects will be smaller and objects become safer.Q.8. Why does a child feel more pain when she falls down on a hard cement floor, than when she falls on the soft muddy ground in the garden?Ans. The effect of force F = ma. i.e., if the mass is constant for a system to decrease force, the ‘a’ should be decreased a = (v - u)/t initial and final velocity of falling body on a surface are u and zero. so it cannot be changed. If time during hitting is increased, the acceleration decreased and force will decrease.On cemented hard floor the time to stop after fall on it is very-very small. But when she/he falls on soft ground of garden she/he sinks in ground and takes more time to stop hence smaller force or pain acts on her/him.Q.9. A woman throws an object of mass 500 g with a speed of 25 m s1.(a) What is the impulse imparted to the object?(b) If the object hits a wall and rebounds with half the original speed, what is the change in momentum of the object?Ans. (a) Mass of object m = 500 g = 0.5 kgu = 0, v = 25 m/s

or force is opposite to the initial velocity of ball.Q.10. Why are mountain roads generally made winding upwards rather than going straight up?Ans. On an inclined plane force of friction on a body going upward is fs = μN cos θ where θ is angle of inclination of a plane with horizontal if θ is small, the force of friction is high and there is a less chance of skidding. The road straight up would have a larger angle and smaller would be the value of friction, hence more are the chances of skidding.

The document NCERT Exemplar: Laws of Motion - 1 Notes | Study Physics For JEE - JEE is a part of the JEE Course Physics For JEE.
All you need of JEE at this link: JEE
Join Course