Q.11. A mass of 2kg is suspended with thread AB (Fig). Thread CD of the same type is attached to the other end of 2 kg mass. Lower thread is pulled gradually, harder and harder in the downward directon so as to apply force on AB. Which of the threads will break and why?

Ans. Thread AB will break. Force on CD is equal to the force (f) applied at D downward, but the force on thread AB is equal to the force F along with force due to mass 2 kg downward. so the force on AB is 2kg more than applied force at D.Hence the thread AB will break up.Q.12. In the above given problem if the lower thread is pulled with a jerk, what happens?Ans. Thread CD will break up if CD is pulled with the jerk because pull on thread CD is not transmitted from CD to AB by mass 2 kg due to its inertia of rest.Q.13. Two masses of 5 kg and 3 kg are suspended with help of massless inextensible strings as shown in Fig. Calculate T1 and T2 when whole system is going upwards with acceleration = 2 m s2 (use g = 9.8 m s–2).

Ans. As the whole system is going up with acceleration = a= 2ms-2 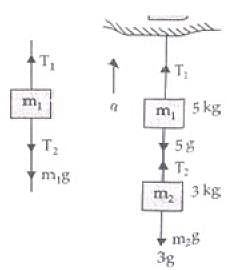 Tension in a string is equal and opposite in all parts of a string.Forces on mass m1 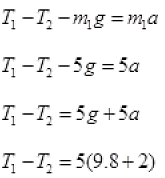 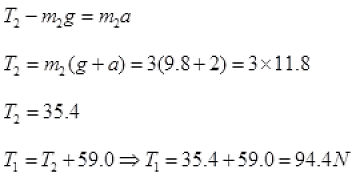 Q.14. Block A of weight 100 N rests on a frictionless inclined plane of slope angle 30° (Fig.). A flexible cord attached to A passes over a frictionless pulley and is connected to block B of weight W. Find the weight W for which the system is in equilibrium.

Ans. Main concept used: On balanced condition i.e., no motion then no frictional force or

For B is at rest W = F = 50N.Q.15. A block of mass M is held against a rough vertical wall by pressing it with a finger. If the coefficient of friction between the block and the wall is µ and the acceleration due to gravity is g, calculate the minimum force required to be applied by the finger to hold the block against the wall ?Ans. Let F force is applied by the finger on a body of mass M to hold rest against the wall. Under the balanced condition

is the minimum force to hold the block against the wall at rest.Q.16. A 100 kg gun fires a ball of 1kg horizontally from a cliff of height 500m. It falls on the ground at a distance of 400m from the bottom of the cliff. Find the recoil velocity of the gun. (acceleration due to gravity = 10 m s–2)Ans. Given, the height of the cliff is,Height of the cliff, h=500 mMass of the ball, m= 1 kgMass of the gun, M=100 kgRange of the ball, R= 400 mAcceleration due to gravity, g= 10 m s-2Let the final velocity of the ball be u and the of the gun be v.Now we know, time of flight is

If the particle has a mass of 500 g, find the force (direction and magnitude) acting on the particle.Ans. From graph (a)

So the time of flight of the coin is 3.33 seconds.

Let these lines be F1 and F2. This means that the vector sum, F1 + F2 is also on this plane.As the body is moving with uniform speed, the acceleration is zero. So the net of all forces is zero.F1 + F2 + F3 = 0So, F3 = - (F1 + F2)This means even F3 lies on the same plane as F1 and F2.Thus the forces are coplanar.(b) As the sum of all forces are zero, the net torque in any direction is zero. For example, torque about “O” isΤ = OP x (F1 + F2 + F3)Τ = 0 as (F1 + F2 + F3) = 0Hence, torque acting about any point is also zero.Q.2. When a body slides down from rest along a smooth inclined plane making an angle of 45° with the horizontal, it takes time T. When the same body slides down from rest along a rough inclined plane making the same angle and through the same distance, it is seen to take time pT, where p is some number greater than 1. Calculate the co-efficient of friction between the body and the rough planeAns. General case

Q.3. Figure shows (vx,t),and(vy,t) diagrams for a body of unit mass. Find the force as a function of time. 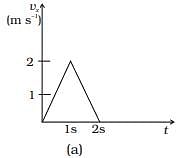 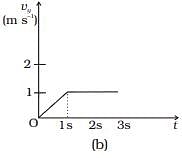 Ans. Here, as the velocity shows different behavior at different times, we have to divide time into intervals to specify velocity.

Now, we can differentiate velocity to calculate Forces(F).

Hence, the total force is 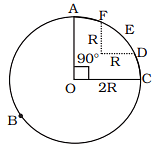 Ans. To find the total time, we find the time of each segments.Segment: ABCHere, the frictional force isf = μmgAnd the centripetal force is

Segment:DEFAgain, the centripetal force is equal to friction.

Now, the time taken is distance/speed.For ABC, the distance is

And for DEF we have

= 86.3Hence the time taken is 86.3 seconds.Q.5. The displacement vector of a particle of mass m is given by

(a) Show that the trajectory is an ellipse.(b) Show that Fr = −mω2r.Ans. (a) Here, the x and y coordinates arex = A cos ωty = B sin ωtThe equation of an ellipse is:

Substituting x and y, we find that LHS = RHS.So the trajectory is an ellipse.(b) To find force, we need to find acceleration.This can be found by differentiating r two times with respect to t.

Q.6. A cricket bowler releases the ball in two different ways(a) Giving it only horizontal velocity, and(b) Giving it horizontal velocity and a small downward velocity.The speed vs at the time of release is the same. Both are released at a height H from the ground. Which one will have greater speed when the ball hits the ground? Neglect air resistance.Ans.

is the total energy of the ball when it hits the groundSo the speed would be the same for both (a) and (b).Q.7. There are four forces acting at a point P produced by strings as shown in Fig. which is at rest. Find the forces F1 and F2

Resolving all forces along Y-axis

(b) If angle α > θ, the angle of inclination of the plane with horizontal it will slide down (f upward) as θ is the angle of repose. So net force downward 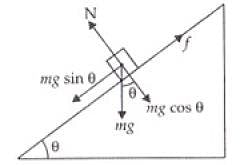 (d) The force applied f.to move the box upward with acceleration a, 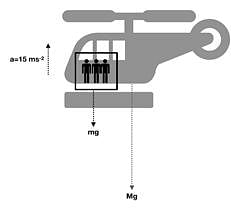 The document NCERT Exemplar: Laws of Motion - 2 Notes | Study Physics Class 11 - NEET is a part of the NEET Course Physics Class 11.
All you need of NEET at this link: NEET
Join Course