Q.2. In which of the following groups of organisms, food material is broken down outside the body and absorbed?(a) Mushroom, green plants, Amoeba(b) Yeast, mushroom, bread mould(c) Paramecium, Amoeba, Cuscuta(d) Cuscuta, lice, tapewormAns: (b)

Q.6. The inner lining of stomach is protected by one of the following from hydrochloric acid. Choose the correct one(a) Pepsin(b) Mucus(c) Salivary amylase(d) BileAns: (b)

Q.11. When air is blown from mouth into a test-tube containing lime water, the lime water turned milky due to the presence of(a) oxygen(b) carbon dioxide(c) nitrogen(d) water vapourAns: (b)

Q.12. The correct sequence of anaerobic reactions in yeast is

Q.13. Which of the following is most appropriate for aerobic respiration?

Q.14. Which of the following statement(s) is (are) true about respiration?(i) During inhalation, ribs move inward and diaphragm is raised(ii) In the alveoli, exchange of gases takes place i.e., oxygen from alveolar air diffuses into blood and carbon dioxide from blood into alveolar air(iii) Haemoglobin has greater affinity for carbon dioxide than oxygen(iv) Alveoli increase surface area for exchange of gasesChoose the correct option:(a) (i) and (iv)(b) (ii) and (iii)(c) (i) and (iii)(d) (ii) and (iv)Ans: (d)

Q.18. What prevents backflow of blood inside the heart during contraction?(a) Valves in heart(b) Thick muscular walls of ventricles(c) Thin walls of atria(d) All of the aboveAns: (a)

Q.19. Single circulation i.e., blood flows through the heart only once during one cycle of passage through the body, is exhibited by(a) Labeo, Chameleon, Salamander(b) Hippocampus, Exocoetus, Anabas(c) Hyla, Rana, Draco(d) Whale, Dolphin, TurtleAns: . (b)

Q.20. In which of the following vertebrate group/groups, heart does not pump oxygenated blood to different parts of the body?(a) Pisces and amphibians(b) Amphibians and reptiles(c) Amphibians only(d) Pisces onlyAns: (d)

Q.25. Which of the following is an incorrect statement?(a) Organisms grow with time(b) Organisms must repair and maintain their structure(c) Movement of molecules does not take place among cells(d) Energy is essential for life processesAns: (c)

Q.35. During deficiency of oxygen in tissues of human beings, pyruvic acid is converted into lactic acid in the(a) cytoplasm(b) chloroplast(c) mitochondria(d) golgi bodyAns: (a) 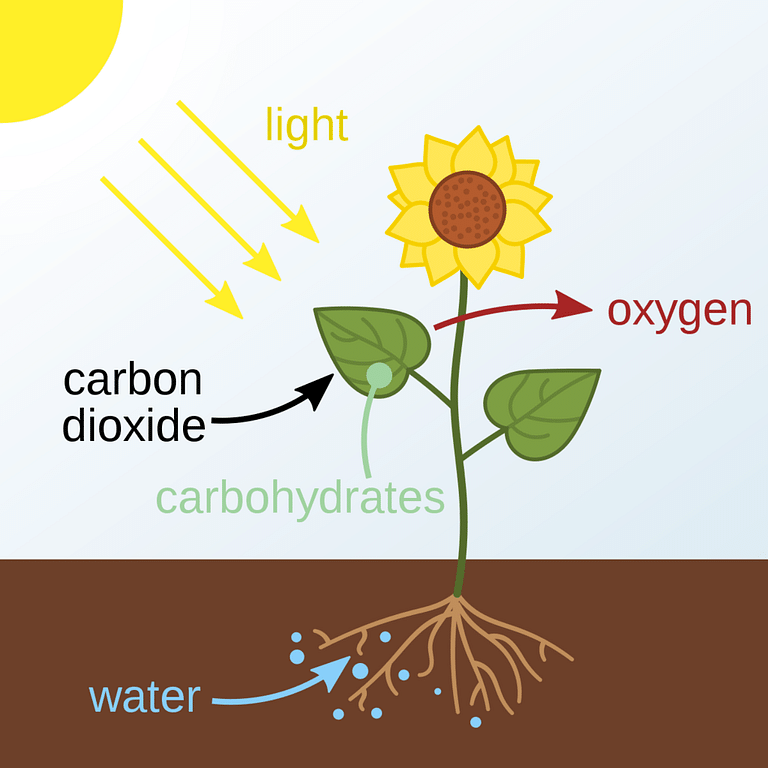 Q.39. Two green plants are kept separately in oxygen free containers. One in dark and other in continuous light which one will longer? Give reasons.Ans: The plant which kept in continuous light will live longer because in light, the plant will be able to undergo photosynthesis and able to convert carbon dioxide into oxygen whereas the plant in dark cannot perform photosynthesis and lack of oxygen will kill the plant.

Q.42. Differentiate between an autotroph and a heterotroph.Ans: 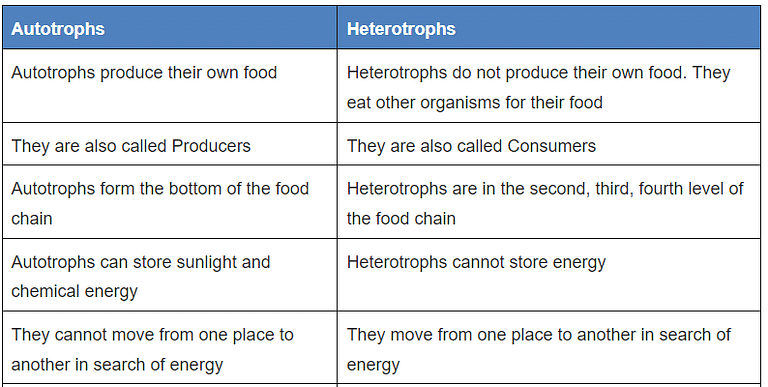 Q.48. Differentiate between an artery and a vein.Ans:

Q.52. What is the significance of emulsification of fats?Ans: Fats are present in food in the form of large globules which makes it difficult for enzymes to act on them. Bile salts present in bile break them down mechanically into smaller globules which increases the efficiency of fat digesting enzymes.

Q.53. What causes movement of food inside the alimentary canal?Ans: The wall of alimentary canal contains muscle layers. Rhythmic contraction and relaxation of these muscles pushes the food forward. This is called peristalsis, which occurs all along the gut.

Q.63. Explain the role of mouth in digestion of food.Ans: (a) Food is crushed into small pieces by the teeth.(b) It mixes with saliva and the enzyme amylase (found in saliva) breaks down starch into sugars(c) Tongue helps in thorough mixing of food with saliva.

Q.67. Why do veins have thin walls as compared to arteries?Ans: Arteries carry blood from the heart to various organs of the body under high pressure so they have thick and elastic walls. Veins collect the blood from different organs and bring it back to the heart. The blood is no longer under pressure so the walls are thin with valves to ensure that blood flows only in one direction.

Q.68. What will happen if platelets were absent in the blood?Ans: In the absence of platelets, the process of clotting will be affected.

Q.71. Why is transpiration important for plants?Ans: Transpiration is important because(a) it helps in absorption and upward movement of water and minerals from roots to leaves(b) it prevents the plant parts from heating up.

Q.72. How do leaves of plants help in excretion?Ans:

Q.73. Explain the process of nutrition in Amoeba.Ans: Amoeba shows holozoic nutrition which Is comprised of the following steps: Ingestion, Digestion, Absorption. Assimilation and Egestion. 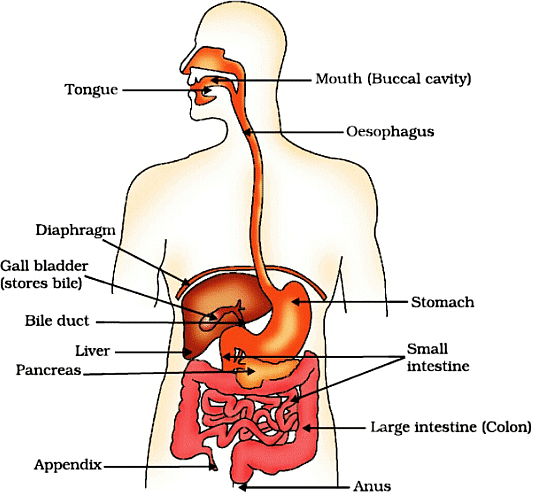 Q.78. How do carbohydrates, proteins and fats get digested in human beings?

Q.79. Explain the mechanism of photosynthesis.Ans: Photosynthesis is a process in which the light energy obtained from the sunlight is used in the manufacture of oxygen and sugar molecules in the presence of carbon dioxide and water. The mechanism of photosynthesis involves two processes; the light reaction that takes place in the thylakoid membrane that leads to the production of NADPH and ATP. Another important reaction involves the light-independent reaction also known by the name ‘Calvin cycle’ that occurs in the stroma of the chloroplasts which is the final step that produces sugar. The NADP and ATP energy-rich molecules play an important role in light-independent reactions to fix the carbon dioxide in order to synthesize glucose molecules.

Q.82. Describe the process of urine formation in kidneys.Ans: Urine is formed in the kidneys in the nephron , i.e., the structural and functional unit of kidney. Blood at high pressure travels into these tubules by the tuft of blood capillaries called glomerulus.

The following steps are involved in the process:(i) Filtration Blood enters the glomerulus through the afferent arterioles, it passes under pressure that results in filtration of blood . Water and small molecules are forced out of glomerular capillary walls and Bowman's capsule. Large molecules remain in the blood of the glomerulus.(ii) Selective reabsorption Some molecules are selectively reabsorbed into the blood. The glomerular filtrate flows through the proximal convoluted tubule, the U- shaped Henle's loop and distal convoluted tubule. The useful substances present such as glucose , amino acids and salts are reabsorbed by a process , which requires energy . The filtrate now contains urea, some salts and The water is then resbsorbed into blood by osmosis (osmoregulation).(iii) Tubular secretion Some nitrogenous waste products like creatinine and some other substances like K+ are removed from blood by DCT (Distal convulated tubule), and are added to urine. The urine formed is collection in the urinary bladder.