The document NCERT Exemplar - Light - Reflection and Refraction Class 10 Notes | EduRev is a part of the Class 10 Course Science Class 10.
All you need of Class 10 at this link: Class 10 Q 3. A pencil when dipped in water in a glass tumbler appears to be bent at the interface of air and water. Will the pencil appears to be bent to the same extent, if instead of water we use liquids like, kerosene or turpentine. Support your answer with reason.   [DoE] Ans. No, it will be dependent on the refractive index of the liquid in which the pencil is dipped. The tip at the bottom will get elevated as per the relation.

Q 5. A convex lens of focal length 20 cm can produce a magnified virtual as well as real image. Is this a correct statement? If yes, where shall the object be placed in each case for obtaining these images?Ans. Yes, for getting a virtual image, the object has to be placed between the optical centre and the focus. For a real and enlarged image, the object should be between F1 and 2F1. Q 6. Sudha finds out that a sharp image of the windowpane of her science laboratory is formed at a distance of 15 cm from the lens. She now tries to focus the building visible to her outside the window instead of the windowpane without disturbing the lens. In which direction will she move the screen to obtain the sharp image of the building? What is the approximate focal length of this lens? [HOTS] Ans. She will move the screen towards the lens such that the final image is at the focus. The focal length will be slightly less than 15 cm as building can be treated as the object at infinite distance.Q 7. How are power and focal length of a lens related? You are provided with two lenses of focal length 20 cm and 40 cm respectively. Which lens will you use to obtain more convergent light?Ans. Power of a lens is defined as the reciprocal of the focal length. So, the lens of 20 cm focal length will converge more. 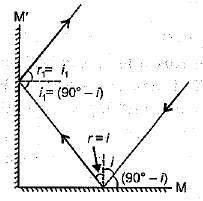 Long Answer Type QuestionsQ 9. The image of a candle flame formed by a lens is obtained on a screen placed on the other side of the lens. If the image is three times the size of the flame and the distance between lens and image is 80 cm, at what distance should the candle be placed from the lens? What is the nature of the image at a distance of 80 cm and the lens?Ans:

Therefore, the candle should be placed at a distance of 80/3 = 26.6 cm to the, left of the convex lens to form the real image at a distance of 80 cm on the right side of the lens.Q 10. The size of image of an object by a mirror having a focal length of 20 cm is observed to be reduced to l/3rd of its size. At what distance the object has been placed from the mirror? What is the nature of the image and the mirror?Ans. If the image is real (as in concave mirror),

If the image is virtual (as in convex mirror),