Q 1. What is the role of the two conducting stationary brushes in a simple electric motor?Ans: The two stationary conducting brushes make the contact in between the two halves of the split rings, and the source battery. Current in the coil enters from the source battery through one conducting brush and flows back to the battery through another brush.Q 2. A magnetic compass needle is placed in the plane of paper near points A as shown in figure. In which plane should a straight current carrying conductor be placed so that it passes through A and there is no change in the deflection of the compass? Under what condition is the deflection maximum and why? 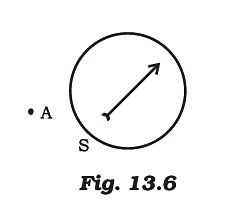 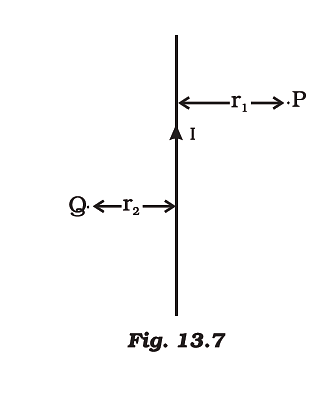 Ans: Apply right-hand thumb rule, the direction of magnetic field produced by a current carrying conductor at PointP - into the plane of paper PointQ - out of the plane of paper.As magnetic field is inversely proportional to distance, the field at Q will be larger than the field at P (r1 > r2).Q 4. It is established that an electric current through a metallic conductor produces a magnetic field around it. Is there a similar magnetic field produced around a thin beam of moving (i) alpha particles, (ii) neutrons?Justify your answer.Ans: (i) Yes, similar magnetic field produced around a thin beam of moving alpha-particle, α-particle being positively charged constitutes a current in the direction of beam motion.(ii) No, as neutron being electrically neutral and does not constitute a current.Q 5. Meena draws magnetic field lines of field close to the axis o f a current carrying circular loop. As she moves away from the centre of the circular loop, she observes that the lines keep on diverging. How will you explain her observation?Ans: Strength of magnetic field at a point decreases as the distance increases

Q 7. Explain the phenomenon of electromagnetic induction. Describe an experiment to show that a current is set up in a closed loop when an external magnetic field passing through the loop increases or decreases.Ans: Electromagnetic Induction: The process by which a changing magnetic field in a conductor induces a current in another conductor placed near it, is called electromagnetic induction.Aim: To show that a current set up in a closed loop due to magnetic field passing through it varies.Apparatus required: Two insulted copper coils having different number of turns, battery, plug key, rheostat, galvanometer, connecting wires and nonconducting cylindrical roll.Procedure:1. Insert the copper coils over a non-conducting cylinder.2. Connect the free ends of coil A called primary coil having large number of turns in series with battery and a plug key.3. Connect the coil B called secondary coil with a galvanometer as shown. 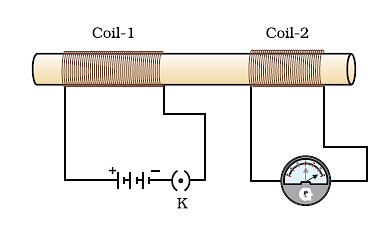 Deflection is observed in the Galvanometer when Current flowing through coil-1 is changed.4. Plug the key and observe, if there is any momentary deflection in the galvanometer.5. Disconnect the primary coil, i.e. coil A from the battery by unplugging the key. Again observe the needle movement.6. Increase or decrease the current in the primary coil by varying the rheostat terminal and observe the degree of needle deflection in the galvanometer.Observation:1. When plugging the key, the needle of galvanometer deflects in one direction and quickly returns to zero.2. When the current is switched off, needle momentarily moves in the opposite direction as observed in previous case.3. Increasing/decreasing the current in primary coil leads to variation in the deflection of needle.Conclusion:1. Potential difference is induced in the secondary coil due to changes in magnetic field associated with it. It is due to change in the electric current through the primary coil.2. Due to induced potential difference, a current is set up in the secondary coil which causes deflection in the galvanometer.Thus, a current is set up in a closed loop when an external magnetic field passing through the loop increases (at the time of starting) or decreases (at the time of stopping).Q 8. Draw an appropriate schematic diagram showing common domestic circuits and discuss the importance of fuse. Why is it that a burnt out fuse should be replaced by another fuse of identical rating?Ans: