Q.6. Depletion of ozone is mainly due to(a) Chlorofluorocarbon compounds(b) Carbon monoxide(c) Methane(d) PesticidesAns: (a)Q.7. Organisms which synthesise carbohydrates from inorganic compounds using radiant energy are called(a) Decomposers(b) Producers(c) Herbivores(d) CarnivoresAns: (b)Explanation: Producers use solar energy to synthesize food from water and carbon-di-oxide. Plants and few micro-organisms are the producers.Organisms that decompose organic material are called decomposers.Herbivores are the organisms that feed on plant and its products.Carnivore are the ones which feed on other organisms.Q.8. In an ecosystem, the 10% of energy available for transfer from one trophic level to the next is in the form of(a) Heat energy(b) Light energy(c) Chemical energy(d) Mechanical energyAns: (c)Explanation: Energy is available for transfer from one trophic level to the next in the form of food. Food is a chemical form of energy.Q.9. Organisms of a higher trophic level which feed on several types of organisms belonging to a lower trophic level constitute the(a) food web(b) ecological pyramid(c) ecosystem(d) food chainAns: (a)Explanation: A series of organisms through which food energy flows in an ecosystem is called a food chain. An ecosystem consists of all the living beings of an area and non-living components of their environment. The graphic summary of the trophic structure and energy transfer in an ecosystem is called ecological pyramids. Organisms of a higher trophic level which feed on several types of organisms belonging to a lower trophic level constitute the food web.Q.10. Flow of energy in an ecosystem is always(a) Unidirectional(b) Bidirectional(c) Multidirectional(d) No specific directionAns: (a)Explanation: The flow of energy is from prey to predator and it cannot be in the reverse direction. Hence the flow of energy is uni-directional.Q.11. Excessive exposure of humans to U V-rays results in(i) damage to the immune system(ii) damage to lungs(iii) skin cancer(iv) peptic ulcers(a) (i) and (ii)(b) (ii) and (iv)(c) (i) and (iii)(d) (iii) and (iv)Ans: (c)Explanation: UV rays affect upper surface of our body. UV rays lead to skin cancer and effect on skin will affect our immune system as skin is considered as the primary level of the immune barrier.Q.12. In the following groups of materials, which group (s) contains only non-biodegradable items?(i) Wood, paper, leather(ii) Polythene, detergent, PVC(iii) Plastic, detergent, grass(iv) Plastic, bakelite, DDT(a) (iii)(b) (iv)(c) (i) and (iii)(d) (ii) and (iv)Ans: (d)Explanation: Group i) has wood and leather which are biodegradable. Group iii) has grass which is biodegradable hence the answer is d) (ii) and (iv)Q.13. Which of the following limits the number of trophic levels in a food chain?(a) Decrease in energy at higher trophic levels(b) Sufficient food supply(c) Polluted air(d) WaterAns: (a)Explanation: Available energy level at a particular trophic level is 10 times the energy level at next tropic level. When we reach the fourth trophic level; a minute portion of energy from producer is available.Q.14. Which of the statement is incorrect?(a) All green plants and blue-green algae are producers(b) Green plants get their food from organic compounds(c) Producers prepare their own food from inorganic compounds(d) Plants convert solar energy into chemical energyAns: (b)Explanation: Green plants produce their food by harnessing solar energy. Solar energy is used to prepare carbohydrate with the help of CO2 and water which are inorganic substances.Q.15. Which group of organisms are not constituents of a food chain?(i) Grass, lion, rabbit, wolf(ii) Plankton, man, fish, grasshopper(iii) Wolf, grass, snake, tiger(iv) Frog, snake, eagle, grass, grasshopper(a) (i) and (iii)(b) (iii) and (iv)(c) (ii) and (iii)(d) (i) and (iv)Ans: (c)Explanation: In option ii) plankton does not eat grass. In option iii) none of them eat grass hence option c) is the right answer.Q.16. The percentage of solar radiation absorbed by all the green plants for the process of photosynthesis is about(a) 1 %(b) 5 %(c) 8 %(d) 10 %Ans: (a)Explanation: Green plants utilize 1% of the radiation absorbed by leaf and use it for photosynthesis.Q.17. In the given Figure 15.1 the various trophic levels are shown in a pyramid. At which trophic level is maximum energy available? 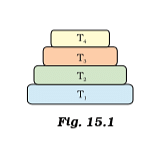 Q.28. Explain the role of decomposers in the environment?Solution: Decomposers breakdown dead and decaying living matter and helps in the nutrient recycling. This will clean the environment by removing dead material.Q.29. Select the mismatched pair in the following and correct it.(a) Biomagnification — Accumulation of chemicals at the successive trophic levels of a food chain(b) Ecosystem — Biotic components of environment(c) Aquarium — A man-made ecosystem(d) Parasites — Organisms which obtain food from other living organismsAns: (b)Explanation: Ecosystem — Biotic components of environmentBoth biotic and abiotic components of the environment constitute an ecosystem.Q.30. We do not clean ponds or lakes, but an aquarium needs to be cleaned. WhySolution: An aquarium is an artificial ecosystem which is incomplete ecosystem when compared to pond or lake which is a natural and complete ecosystem.

Q.31. Indicate the flow of energy in an ecosystem. Why is it unidirectional? Justify.Solution: Flow of energy in an ecosystem is as follows.The green plants in a terrestrial ecosystem capture about 1% of the energy of sunlight that falls on their leaves and convert it into food energy.When green plants are eaten by primary consumers, a great deal of energy is lost as heat to the environment, some amount goes into digestion and in doing work and the rest goes towards growth and reproduction. An average of 10% of the food eaten is turned into its own body and made available for the next level of consumers.Therefore, 10% can be taken as the average value for the amount of organic matter that is present at each step and reaches the next level of consumers.Since so little energy is available for the next level of consumers, food chains generally consist of only three or four steps. The loss of energy at each step is so great that very little usable energy remains after four trophic levels.There are generally a greater number of individuals at the lower trophic levels of an ecosystem, the greatest number is of the producers.The length and complexity of food chains vary greatly. Each organism is generally eaten by two or more other kinds of organisms which in turn are eaten by several other organisms. So instead of a straight line food chain, the relationship can be shown as a series of branching lines called a food web. 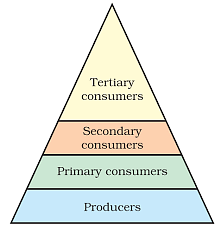 The flow of energy is unidirectional because the energy that is captured by the autotrophs does not revert to the solar input and the energy which passes to the herbivores does not come back to autotrophs. As it moves progressively through the various trophic levels it is no longer available to the previous level. Secondly, the energy available at each trophic level gets diminished progressively due to the loss of energy at each level.Q.32. What are decomposers? What will be the consequence of their absence in an ecosystem?Solution: Microorganisms, comprising bacteria and fungi, break-down the dead remains and waste products of organisms. These microorganisms are the decomposers as they break-down the complex organic substances into simple inorganic substances that go into the soil and are used up once more by the plants.If decomposers are absent in the ecosystem recycling of material in the biosphere will not take place which would lead to the accumulation of dead plants and animals in the environment. Additionally, the environment would be finally devoid of all its resources which are needed to maintain and sustain life.Q.33. Suggest any four activities in daily life which are eco-friendlySolution: Activities in daily life which are eco-friendly are as follows

Q.34. Give two differences between food chain and food web.Solution:

Q.35. Name the wastes which are generated in your house daily. What measures would you take for their disposal?Solution: Wastes generated in our house daily are as follows(a) Kitchen wastes(b) Paper wastes like newspapers, bags, envelopes(c) Plastic bags(d) Vegetable/fruit peels/rind Measures for disposalMeasures to take to dispose of house waste are(a) Segregation of biodegradable and non-biodegradable wastes.(b) Safe disposal of plastic bags.(c) Vegetable/fruit peels can be placed near trees/plants, which on decomposition will enrich the soil with nutrients.(d) Give paper wastes for recycling.(e) Prepare a compost pit for kitchen wastes.Q.36. Suggest suitable mechanism (s) for waste management in fertiliser industries.Solution: To manage waste in the fertiliser industry following steps must be taken:For control of gaseous pollutants combustion equipments are used which can be oxidised. The pollutants are exposed to a high temperature in the process. Air pollutants, such as certain gases and vapour and inflammable compounds are controlled through the use’ of adsorption equipments. Adsorption is a surface phenomenon, and it needs the presence of a large solid surface area. This process removes toxic and odoriferous compounds are efficiently.Three options available for controlling the effluents are: