The document NCERT Exemplar - Sexual Reproduction in Flowering Plants (Part - 2) Notes | EduRev is a part of the NEET Course Biology Class 12.
All you need of NEET at this link: NEET

Q.1. List three strategies that a bisexual chasmogamous flower can evolve to prevent self pollination (autogamy).Ans.  Flowering plants have developed many devices to discourage self-pollination and to encourage cross-pollination.

Q.2. Given below are the events that are observed in an artificial hybridization programme. Arrange them in the correct sequential order in which they are followed in the hybridisation programme.

(a) Re-bagging(b) Selection of parents(c) Bagging(d) Dusting the pollen on stigma(e) Emasculation(f) Collection of pollen from male parent.Ans. (b)Selection of parents →(e) Emasculation → (c) Bagging → (f) Collection of pollen from male parent →(d) Dusting the pollen on stigma →(e) Rebagging.Q.3. Vivipary automatically limits the number of offsprings in a litter. How?Ans. In viviparous animals (majority of mammals including human beings), the zygote develops into a young one inside the body of the female organism. After attaining a certain stage of growth, the young ones are delivered out of the body of the female organism. Vivipary automatically limits the number of offspring in a litter because female have limited space for the development of embryo.Q.4. Does self incompatibility impose any restrictions on autogamy? Give reasons and suggest the method of pollination in such plants.Ans. Self-incompatibility imposes restriction to autogamy. The device to prevent inbreeding is self-incompatibility or self-sterility. This is a genetic mechanism and prevents self-pollen (from the same flower or other flowers of the same plant) from fertilising the ovules by inhibiting pollen germination or pollen tube growth in the pistil. Self-incompatibility is overcome by mixed pollination.Q.5. In the given diagram, write the names of parts shown with lines. 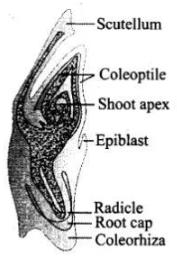 L.S. of an embryo of grass

If hybrids are made into apomicts, there is no segregation of characters in the hybrid progeny. Then the farmers can keep on using the hybrid seeds to raise new crop year after year and he does not have to buy hybrid seeds every year. Q.1. Starting with the zygote, draw the diagrams of the different stages of embryo development in a dicot.Ans. Stages in embryo development in a dicotQ.2. What are the possible types of pollinations in chasmogamous flowers. Give reasons.Ans. A bisexual flower which normally open is called chasmogamous flower.Kinds of Pollination1. Autogamy: In this type, pollination is achieved within the same flower. Transfer of pollen graft from the anther to the stigma of the same flower. In a normal flower which opens and exposes the anthers and stigma complete autogamy is rather rare.Majority of flowering plants produce hermaphrodite flowers and pollen grains are likely to come in contact with the stigma of the same flower. Continued self-pollination result in inbreeding depression. Flowering plants have developed many devices to discourage self-pollination and to encourage cross-pollination.2. Geitonogamy: Transfer of pollen grains from the anther to the stigma of another flower of the same plant.3. Xenogamy: Transfer of pollen grains from anther to the stigma of a different plant.Q.3. With a neat, labelled diagram, describe the parts of a mature angiosperm embryo sac. Mention the role of synergids.Ans. The mature embryo sacFiliform apparatus present at the micropylar part of the synergids guides the entry of pollen tube. Q.4. Draw the diagram of a microsporangium and label its wall layers. Write briefly on the role of the endothecium.Ans. Enlarged view of one microsporangium showing wall layersEndothecium performs the function of protection and help in dehiscence of anther to release the pollen.Q.5. Embryo sacs of some apomictic species appear normal but contain diploid cells. Suggest a suitable explanation for the condition.Ans. It is true that many apomicts possess normal looking embryo sacs. The only possibility of the embryo sac possessing diploid cells is due to failure of meiotic division at the megaspore mother cell stage. Since, the megaspore mother cell has a diploid nucleus, if it undergoes mitosis instead of meiosis, all the resulting nuclei and cells will be diploid in nature.