The document NCERT Exemplar - The Human Eye and Colorful World Notes | EduRev is a part of the Class 10 Course Science Class 10.
All you need of Class 10 at this link: Class 10

Q 1. A student sitting at the back of the classroom cannot read clearly the letters written on the blackboard. What advice will a doctor give to him? Draw ray diagram for the correction of this defect.Ans: The student is suffering from short-sightedness. Doctor will advise to him to wear a concave lens having suitable power for correcting the vision.

Q 2. How are we able to see the nearby as well as distant objects clearly?Ans. Accommodation: The ability of the ciliary muscles to adjust the curvature and thereby the focal length of eye lens to get a clear view of the objects is called accommodation. There is always a limit up to which ciliary muscles can increase or decrease the focal length of eye lens. This change enables us to see nearer and far-off objects clearly.Q 3. A person needs a lens of power - 4.5 D for correction of his vision. (a) What kind of defect in vision is he suffering from? (b) What is the focal length of the corrective lens? (c) What is the nature of the corrective lens?Ans. (a) The defect is myopia (short-sightedness).(b) Focal length

(c) The lens is a concave lens.Q 4. How will you use two identical prisms so that a narrow beam of white light incident on one prism emerges out of the second prism as white light ? Draw the diagram.Ans. Consider a prism A. 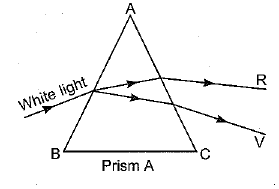 If another prism B is placed inverted to prism A as shown below, the constituent coloured rays that emerge out of prism A will be made to merge together to come out as a beam of white light.

Q 5. Is the position of a star as seen by us its true position? Justify your answer.Ans. Light from the star passing through various layers of the atmosphere bends towards the normal due to; the changing refractive indices of different layers of the atmosphere and appears as if it is coming from a higher level than their true position. As a result, the star appears slightly higher than its actual position.Long Answer Type QuestionsQ 6. Explain the structure and functioning of Human eye. How are we able to see nearby as well as distant objects?Ans. Human Eye: The natural optical device through which one could see objects around him. It forms an inverted and real image on a light sensitive surface called the retina. The parts of human eye and its functions:(i) Cornea: It is a thin membrane, covering the surface of eyeball, through which light enters, it acts as a primary lens, which provides the refraction for light rays entering the eye.(ii) Aqueous Humour: It is a transparent gelatinous fluid, secreted from ciliary muscles and fills the space between the cornea and the eye lens. It provides nutrition to the eye tissues and increases the protection against dust, wind, pollen grains, etc.(iii) Iris: It is a dark muscular diaphragm that controls the size of the pupil and is located just behind the cornea in the eye.(iv) Pupil: The black opening between the aqueous humour and the eye lens. Since light does not get reflected from it, so its appearance is dark. The amount of light entering the eye is controlled by the size of the pupil. In dim light, it opens up completely through the iris, but in bright light, it becomes very small.(v) Ciliary Muscle: (a) It modifies the curvature and thereby the focal length of the eye lens by contracting or relaxing itself to focus the image of an object on the retina according to the distance of the object,(b) It holds the eye lens in position.(vi) Eye Lens: It is converging in nature, made by the jelly-like proteinaceous material. The focal length of the eye lens is changed by the ciliary muscles. Its function is to focus the incoming light rays from the object on the retina using its refractive property.(vii) Vitreous Humour: It is a transparent, colourless gelatinous mass that fills the space between the eye lens and the retina of the eyeball. It helps to keep retina in place by pressing it against the choroid.(viii) Retina: It is a delicate membrane. It acts like a screen on which a real, inverted and diminished image of the object is formed by the crystalline lens of the eye. It contains an enormous number of light sensitive cells. These light receptors are known as rod and cone cells which generate electrical signals upon illumination. These electrical impulses are sent to the brain via optic nerves for further processing.(ix) Rods and Cones: These are the light sensitive cells present in retina and get activated upon illumination. Rods respond to the intensity of light, whereas cones respond to the colour. There are around 125 million rods and cone cells. These cells generate electrical signals which are transmitted to the brain through optical nerves. The brain processes the information via these electric signals and gives the impression of an erect image to us.

To see nearby as well as distant objects, ciliary muscles modify the curvature of the eye lens. This leads to the variation in focal length of the eye lens as explained below.(a) When ciliary muscles are relaxed, the lens becomes thin. The focal length of the lens increases and has maximum value, equal to the distance from the retina. So, the parallel rays coming from the distant objects entering the eye, get focused on the retina. This enables us to see distant objects clearly.(b) When the eye looks at nearby objects, the ciliary muscles are strained/ contract. This increases the curvature of the eye lens and it becomes thicker. As a result, its focal length decreases but increases its converging power. Hence, the sharp image of the nearby objects again forms on the retina. This enables us to see nearby objects clearly.

This phenomenon is called the power of accommodation of the eye.