From equation (i) and (ii), radius of nth orbit

The atomic number (Z) of lithium is 3.As

(m = electron mass).If one decides to work in a frame of reference where the electron is at rest, the proton would be moving arround it. By similar arguments, the binding energy would be

This last expression is not correct because (a) n would not be integral. (b) Bohr - quantisation applies only to electron (c) The frame in which the electron is at rest is not inertial. (d) The motion of the proton would not be in circular orbits, even approximately.Ans. (c)Solution.As the mass of an electron is negligible as compared to proton. So the centripetal force cannot provide the electrostatic force,

Q.14. The mass of a H-atom is less than the sum of the masses of a proton and electron. Why is this?Ans. During formation of an atom with neucleon and electrons, it need the energy to bind the nucleons together in nucleus. This energy comes from Einstein mass- energy relationE=ΔmC2Where Δm=[Zmp+(A-Z)mn]-MSo the mass of a H atom is

..(i)Hence the magnitude of electrostatic force F ∞ q1 x q2If proton had a charge (+4/3)e and electron a charge (-3/4)e, then the Bohr formula for the H-atom remains same, since the Bohr formula involves only the product of the charges which remain constant for given values of charges.

Q.18. Consider two different hydrogen atoms. The electron in each atom is in an excited state. Is it possible for the electrons to have different energies but the same orbital angular momentum according to the Bohr model?Ans. Bohr postulated that an electron in an atom can move around the nucleus in a certain circular stable orbits without emitting radiations.Bohr found that the magnitude of the electron’s angular momentum isquantized i.e

where n = 1 , 2, 3...... each value o f n corresponds to a permitted value o f the orbit radius.rn = Radius of nth orbit, vn = corresponding speedThus, the angular momentum (L) of the orbiting electron is quantisedAccording to Bohr model electrons having different energies belong to different levels haying different values o f n. So, their angular momenta will be different, as

E'n = -6.8eVQ.20. Assume that there is no repulsive force between the electrons in an atom but the force between positive and negative charges is given by Coulomb’s law as usual. Under such circumstances, calculate the ground state energy of a He-atom.Ans. For H atom Z=1 and n=1

Q.21. Using Bohr model, calculate the electric current created by the electron when the H-atom is in the ground state.Ans. Let for an electron of H atom velocity in orbit=v m/sRadius of orbit=a0 = Bohr’s radiusSo the number of revolutions per second

Q.22. Show that the first few frequencies of light that is emitted when electrons fall to the nth level from levels higher than n, are approximate harmonics (i.e. in the ratio 1 : 2: 3...) when n >>1.Ans.

Wave number/wavelength:Wave number is the number of waves in unit length

The frequency of any line in a series in the spectrum of hydrogen like atoms corresponding to the transition of electrons from (n + p) level to nth level can be expressed as a difference of two terms;

Hence, the first few frequencies of light that is emitted when electrons fall to the nth level from levels higher than n, are approximately harmonic (i.e., in the ratio 1 : 2 : 3 ...) when n » 1.Q.23. What is the minimum energy that must be given to a H atom in ground state so that it can emit an Hγ line in Balmer series. If the angular momentum of the system is conserved, what would be the angular momentum of such Hγ photon?Ans. Balmer series: Named after Johann Balmer, who discovered the Balmer formula, an empirical equation to predict the Balmer series, in 1885. Balmer lines are historically referred to as "H-alpha". corresponds to transition 3 → 2, "H-beta" 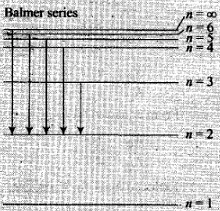 From above discussion it is clear that Hγ in Balmer series corresponds to transition n = 5 to n = 2. Initially the electron in ground state i.e., from n = 1 must first should be placed in state n = 5.Energy required for the transition from n = 1 to n - 5 is given byE = E5 - E1

Total energy En of the electron revolving in an nth stationary orbit,

m is the reduced mass of the electron and proton in H atom.So hv = Eni - Enf

For hydrogen and deuterium

The percentage difference in the wavelength = 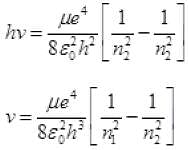 as μ = mass defect, e,ε, 0 c, and h are constants for an atom.∴ λ ∝ 1/hSo eqn. Ist can be written as percentage change in the wavelength =

Me << MD so neglecting the higher degree term

Decrease in wavelength.(-) sign shows that λD < λH.Q.26. If a proton had a radius R and the charge was uniformly distributed, calculate using Bohr theory, the ground state energy of a H-atom when (i) R = 0.1 Å, and (ii) R = 10 Å.Ans. (i) Consider in H atom nucleus as point charge electron is revolving around nucleus with speed v and radius rA. The Colombian force provides centripetal force to revolve around nucleus.

Now for ground state of H, n=1 and

P.E. = 3992.9/1000 = -3.99eVK.E. = 0.167 eVQ.27. In the Auger process an atom makes a transition to a lower state without emitting a photon. The excess energy is transferred to an outer electron which may be ejected by the atom. (This is called an Auger electron). Assuming the nucleus to be massive, calculate the kinetic energy of an n = 4 Auger electron emitted by Chromium by absorbing the energy from a n = 2 to n = 1 transition.Ans. The energy En of the nth state

for the force between an electron and a proton. The (1/r) dependence of |F| can be understood in quantum theory as being due to the fact that the ‘particle’ of light (photon) is massless. If photons had a mass mp, force would be modified to

is very small so by neglecting it we get,

This is the P.E. of electron in ground state R0 to r =