The document NCERT Exemplars - Electrostatic Potential and Capacitance Notes | EduRev is a part of the JEE Course NEET Revision Notes.
All you need of JEE at this link: JEE

Q.1. A capacitor of 4 µ F is connected as shown in the circuit (Fig. 2.1). The internal resistance of the battery is 0.5Ω . The amount of charge on the capacitor plates will be

(a) 0(b) 4µ C(c) 16µ C(d) 8µ CAns. (d)Solution.Key concept: A capacitor offers zero resistance in a circuit when it is uncharged, i.e., it can be assumed as short circuited and it offers infinite resistance when it is fully charged. Hence electrostatic potential energy of the positive charge decreases.Q.3. Figure 2.2 shows some equipotential lines distributed in space. A charged object is moved from point A to point B. Ans. (c)Solution.Here the system can be considered as two capacitors C1 and C2 connected in series as shown in figure.The capacitance of parallel plate capacitor filled with dielectric block has thickness d1 and dielectric constant K2 is given by

...(i)We can write the equivalent capacitance as

Q.7. Consider a uniform electric field in the or we can write

Q.9. The work done to move a charge along an equipotential from A to B
(a) Cannot be defined as

(b) Must be defined as 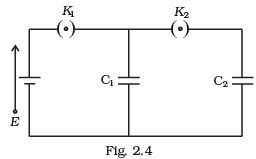 Q.13. A parallel plate capacitor is connected to a battery as shown in Fig. 2.5. Consider two situations: 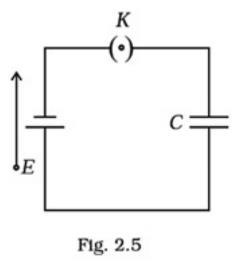 Since R1 > R2 it follows that
σ1 > σ2
i.e the charge density of smaller sphere is less than that of larger sphere

Q.18. A test charge q is made to move in the electric field of a point charge Q along two different closed paths (Fig. 2.6).First path has sections along and perpendicular to lines of electric field. Second path is a rectangular loop of the same area as the first loop. How does the work done compare in the two cases? 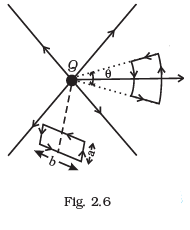 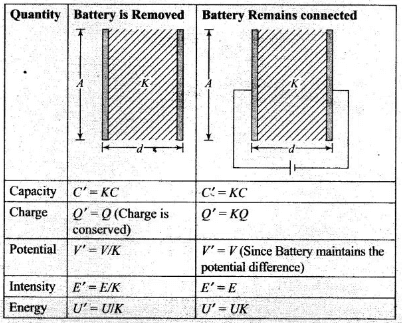 Hence potential energy of a point charge -q is The variation of potential energy with z is shown in the figure.
The charge -q displaced would perform oscillations. Nothing can be concluded just by looking at the graph.

Q.23. Calculate potential on the axis of a ring due to charge Q uniformly distributed along the ring of radius R.
Ans. Let us consider a ring of radius R having charge +Q distributed uniformly. Also a point P at distance z on its axis passing through centre O and perpendicular to plane of ring. So potential due to element dl at P,
dV =

Integrating over a ring the potential at P, Vp

Q.24. Find the equation of the equipotentials for an infinite cylinder of radius r0, carrying charge of linear density λ.
Ans. Consider a Gaussian cylindrical dotted surface, S at a distance r from the centre of the cylinder of radius r0 of infinite length.
The electric field lines are radial and perpendicular to the surface.

Let electric field intensity on Gaussian surface at P is E, and total charge q on cylinder will be q = λl.
So, by Gauss’s law,

So potential difference d at distance r0 and r from the centre of cylinder,

So equipotential surfaces are the coaxial curved surfaces of cylinders with given cylinder of radius r related as above.

Q.25. Two point charges of magnitude + q and - q are placed at (-d/2, 0,0) and (d/2, 0,0), respectively. Find the equation of the equipoential surface where the potential is zero.
Ans. The potential due to charge +q and -q will be zero in between the line joining the two charges +q and -q. Let zero potential is at S. 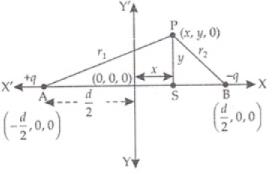 Then equipotential surface will pass through S and perpendicular to line joining two chargers or AB. So net potential at P=O 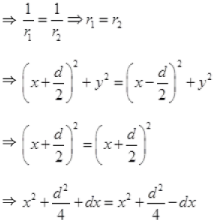 as U is positive

Volts
Final potential on both the capacitors becomes 6 volts.

Q.27. A capacitor is made of two circular plates of radius R each, separated by a distance d<<R. The capacitor is connected to a constant voltage. A thin conducting disc of radius r<<R and thickness t<<r is placed at a centre of the bottom plate. Find the minimum voltage required to lift the disc if the mass of the disc is m.
Ans. Let A and B are circular plates of radius R separated by distance d << R kept horizontally.

A thin conducting disc D of radius r << R of thickness ‘t’ is placed concentrically on lower plate B as shown in figure.
Let plate A and B charged with potential V.
The magnitude of electric field E between plates of capacitor

q’ is the charge conducted by plate B to disc D during charging. Nature of charge on plate B and disc will be same so repulsive force acts between B and D.
So, the charge on disc D=q’=

This repulsive force will be balanced by weight mg of disc D.

Q.28. (a) In a quark model of elementary particles, a neutron is made of one up quarks [charge (2/3) e] and two down quarks [charges –(1/3) e]. Assume that they have a triangle configuration with side length of the order of 10–15 m. Calculate electrostatic potential energy of neutron and compare it with its mass 939 MeV.
(b) Repeat above exercise for a proton which is made of two up and one down quark.
Ans. (a)

[charge on down quark]

[charge on up quark] 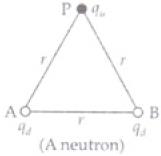 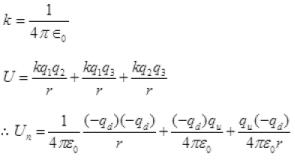 U = -0.48 MeV
So, charges inside neutron [1qu and 2qd] are attracted by energy of 0.48 MeV.
Energy released by a neutron when converted into energy is 939 MeV.
∴ Required ratio Both charged spheres are kept in contact, so charge flows between them and their potential becomes equal, let the charges on them now become q1 and q2.
So, V1=V2 Ans. When K2 is open and K1 is closed the capacitors C1 and C2 will charge and potential develops across them i.e., V1 and V2 respectively which will be equal to the potential of battery 9 V.
∴ V1+V2=9......I
∵

Q.31. Calculate potential on the axis of a disc of radius R due to a charge Q uniformly distributed on its surface.
Ans. Consider a point P on the axis perpendicular to the plane of disc and at distance x from the centre O of disc as shown in the figure.

Now consider a ring of radius r of thickness dr on disc of radius R, as shown in figure, Again let the charge on the ring is dq then potential dV due to ring at P, will be

dq is the charge on the ring = σ .area of ring

Because dr is small therefore, dr2 is negligible.

So the potential due to charged disc 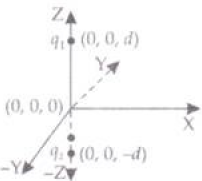 Then componendo and dividend of

Q.33. Two charges –q each are separated by distance 2d. A third charge + q  is kept at mid point O. Find potential energy of + q as a function of small distance x from O due to –q charges. Sketch P.E. v/s x and convince yourself that the charge at O is in an unstable equilibrium.
Ans.