(c) M is not related to the mass of the hydrogen atom.(d)

(|V| = magnitude of the potential energy of electron in the H-atom).Ans. (b)Solution.During formation of H-atom some mass of nucleons convert into energy by E = mc2, this energy is used to bind the nucleons along with nucleus. So mass of atom becomes slightly less than sum of actual masses of nucleons and electrons.Actual mass of H atom = MP + Me - (B.E./c2) (B/c2 is binding energy)B.E. (B) of H atoms is 13.6 eV per atom.

⇒ Q2 = (Mx - My -2me)c2Q.5. Tritium is an isotope of hydrogen whose nucleus Triton contains 2 neutrons and 1 proton. Free neutrons decay into

. If one of the neutrons in Triton decays, it would transform into He3 nucleus. This does not happen. This is because(a) Triton energy is less than that of a He3 nucleus.(b) The electron created in the beta decay process cannot remain in the nucleus.(c) Both the neutrons in triton have to decay simultaneously resulting in a nucleus with 3 protons, which is not a He3 nucleus.(d) Because free neutrons decay due to external perturbations which is absent in a triton nucleusAns. (a)Solution.Triton (1H3) has 1 proton and 2 neutrons. If a neutron decays as:

Q.6. Heavy stable nuclei have more neutrons than protons. This is because of the fact that (a) Neutrons are heavier than protons.(b) Electrostatic force between protons are repulsive.(c) Neutrons decay into protons through beta decay.(d) Nuclear forces between neutrons are weaker than that between protonsAns. (b)Solution.Key concept: Neutron-proton ratio (N/2 ratio:) The chemical properties of atom are governed entirely by the number of protons (Z ) in the nucleus, stability of an atom appears to depend on both the number o f protons and number of neutrons.(i) For lighter nuclei, the greatest stability is achieved when the number o f protons and neutrons are approximately equal (N = Z ), i.e. N/Z = 1(ii) Heavy nuclei are stable only when they have more neutrons than protons. Thus heavy nuclei are neutron rich compared to lighter nuclei ( for heavy nuclei, more is the number of protons in the nucleus, greater is the electrical repulsive force between them. Therefore more neutrons are added to provide the strong attractive forces necessary to keep the nucleus stable.)Q.7. In a nuclear reactor, moderators slow down the neutrons which come out in a fission process. The moderator used have light nuclei. Heavy nuclei will not serve the purpose because(a) They will break up.(b) Elastic collision of neutrons with heavy nuclei will not slow them down.(c) The net weight of the reactor would be unbearably high.(d) Substances with heavy nuclei do not occur in liquid or gaseous state at room temperatureAns. (b)Solution. Key concept: A moderator is a material used in a nuclear reactor to slow down the neutrons produced from fission. By slowing the neutrons down the probability of a neutron interacting with Uranium-235 nuclei is greatly increased thereby maintaining the chain reaction. Moderators are made from materials with light nuclei which do not absorb the neutrons but rather slow them down by a series of collisions.The moderator only slows neutrons down in order to increase the interaction with Uranium nuclei. They do not give any protection if the reaction goes out of control. 1 fa chain reaction is heading out of control the reactors needs to be able to reduce the concentration of neutrons. For this the reactor uses control rods. Control rods are matte from material with the ability to absorb neutrons. Cadmium and Boron are examples of suitable materials. By inserting.control rods between the fuel rods the chain reaction can be slowed dowp-or shut down. Withdrawing the control rods can restart or speed up the reaction.In our given question, the moderator used have light nuclei (like proton). When protons undergo perfectly elastic collision with the neutron emitted their velocities are exchanged, i.e., neutrons come to rest and protons move with the velocity of neutrons.Heavy nuclei will not serve the purpose because elastic collisions of neutrons with heavy nuclei will not slow them down.

Q.8. Fusion processes, like combining two deuterons to form a He nucleus are impossible at ordinary temperatures and pressure.The reasons for this can be traced to the fact: (a) Nuclear forces have short range (b) Nuclei are positively charged(c) The original nuclei must be completely ionized before fusion can take place(d) The original nuclei must first break up before combining with each otherAns. (a, b)Solution.Two deuteron can combine to form He atom when their nuclei come close to nuclear range where electrostatic repulsive force between positively charged deuterons does not act. Electrostatic force increases very high on decreasing their distance 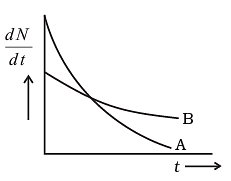 or instant t or for a particular time

so λA > λB.  at point P the intersecting point of two graphs at time t same. 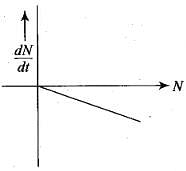 According to Rutherford and Soddy law for radioactive decay

where decay constant (λ) is constant for a given radioactive material. Therefore, graph between N and dN/dt is a straight line as shown in the diagram.Q.13. Which sample, A or B shown in Figure has shorter mean-life? 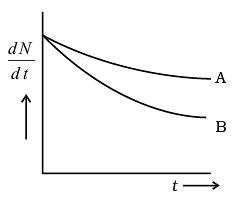 Ans. Initially at t=0 from figure given

i.e., initially both samples has equal number of radioactive atoms. Considering at any instant t = t from figure, 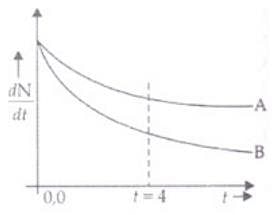 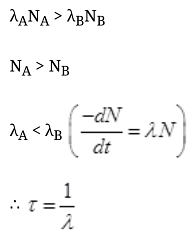 So mean life time of sample A is greater than of B.Q.14. Which one of the following cannot emit radiation and why?  Excited nucleus, excited electron.Ans. Excited electron cannot emit radiation because energy of electronic energy levels is in the range of eV and not MeV (mega electron volt), y-radiations have energy of the order of MeV.Key concept: The energy of internal motion of a nucleus is quantized. A typical nucleus has a set of allowed energy levels, including a ground state (state of lowest energy) and several excited states. Because of the great strength of nuclear interactions, excitation energies of nuclei are typically of the order of the order of 1 MeV, compared with a few eV for atomic energy levels. In ordinary physical and chemical transformations the nucleus always remains in its ground state. When a nucleus is placed in an excited state, either by bombardment with high-energy particles or by a radioactive transformation, it can decay to the ground state by emission of one or more photons called gamma rays or gamma-ray photons, with typical energies of 10 keV to 5 MeV. This process is called gamma (γ) decay.Q.15. In pair annihilation, an electron and a positron destroy each other to produce gamma radiation. How is the momentum conserved?Ans.  when an electron and positron combine together coming from opposite directions they destroy each other by the emission of two Υ-rays in opposite direction to conserve linear momentum as below

The document NCERT Exemplar: Nuclei - 1 - Notes | Study Physics Class 12 - NEET is a part of the NEET Course Physics Class 12.
All you need of NEET at this link: NEET
Attempt Now
Join Course