The document NCERT Solution, Money and Credit, Class 10 SST | EduRev Notes is a part of the Class 10 Course Social Studies (SST) Class 10.
All you need of Class 10 at this link: Class 10

Ques 1: In situations with high risks, credit might create further problems for the borrower. Explain.Ans: In situations with high risks, credit might create further problems for the borrower. This is also known as a debt-trap. Taking credit involves an interest rate on the loan and if this is not paid back, then the borrower is forced to give up his collateral or asset used as the guarantee, to the lender. Thus, in situations with high risks, if the risks affect a borrower badly, then he ends up losing more than he would have without the loan.Ques 2: How does money solve the problem of double coincidence of wants? Explain with an example of your own.Ans: Money solves the problem of double coincidence of wants by acting as a medium of exchange. Double coincidence of wants implies a situation where two parties agree to sell and buy each other’s commodities., i.e., what one party desires to sell is exactly what the other party wishes to buy.Money does away with this tedious and complex situation by acting as a medium of exchange that can be used for one and all commodities. For example, if an ice-cream vendor wants a bicycle but the bicycle manufacturer wants clothes, and not ice-creams, then the vendor can use money to obtain a bicycle.He does need to adhere to the bicycle man’s needs because money acts as the common medium of exchange. Similarly, the bicycle manufacturer can then use the money to buy clothes.Ques 3: How do banks mediate between those who have surplus money and those who need money?Ans: A bank mediates between those who have surplus money and those who need money by allowing both to open accounts with it. Banks only keep about 15% of cash reserves to provide to people who come to withdraw money on a daily basis. Those with surplus money are encouraged to invest with the bank and are paid a certain rate of interest for the same. Those who need loans are required to pay an interest on their loans. The difference between payment to lenders and receipt from borrowers comprises the bank’s earnings. Thus, the bank acts as a beneficiary for those with surplus money as well as those who need money.Ques 4: Look at a 10 rupee note. What is written on top? Can you explain this statement?Ans: A ten rupee note has “Reserve Bank of India” written at the top, along with a statement “guaranteed by the central government”, following it. It is a promissory note and can only be issued by the Reserve Bank of India which supervises all money-related functions in the formal sector, in India. There are some main objectives of SHGs, which are as followed -
• It organises the rural poor, especially women, into small Self Help Groups.
• It collects saving of the members.
• It provides loans without collateral.
• It provides timely loans for various purposes.
• It provides loans at reasonable rate of interest and on easy terms.
• It also provides a platform to discuss and act on a variety of social issues such as education, health, nutrition, domestic violence, etc. 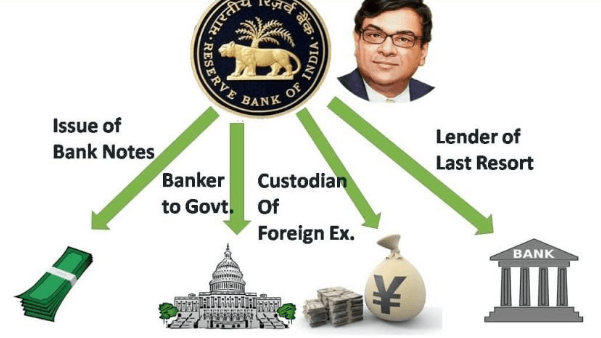 • RBI holds part of the cash reserve of the commercial banks. RBI mainly ensures that the banks maintain a minimum cash balance out of the deposits they receive.
• The commercial banks have to submit information to RBI on how much they are lending, to whom, and at what interest rate, etc.
• RBI observes that the Banks are not only providing loans to profitable businesses but also to traders and small cultivators, small scale industries, small borrowers etc.Ques 9: Analyse the role of credit for development.Ans: Credit plays a crucial role in a country’s development. By sanctioning loans to developing industries and trade, banks provide them with the necessary aid for improvement. This leads to increased production, employment and profits. However, caution must be exercised in the case of high risks so that losses do not occur. This advantage of loans also needs to be manipulated and kept under an administrative hold because loans from the informal sector include high interest rates that may be more harmful than good. For this reason, it is important that the formal sector gives out more loans so that borrowers are not duped by moneylenders, and can ultimately contribute to national development.Ques 10: Manav needs a loan to set up a small business. On what basis will Manav decide whether to borrow from the bank or the moneylender? Discuss.Ans: It would be Manav’s decision to borrow money from the bank or the money lender on the basis of the following terms of credit:
• Depending on the suitable rate of interest
• Requirements availability of collateral and documentation required by banker.
• Mode of repayment.
Depending on these factors and of course, easier terms of repayment.Ques 11: In India, about 80 per cent of farmers are small farmers, who need credit for cultivation.
(a) Why might banks be unwilling to lend to small farmers?
(b) What are the other sources from which the small farmers can borrow?
(c) Explain with an example how the terms of credit can be unfavourable for the small farmer.
(d) Suggest some ways by which small farmers can get cheap credit.
Ans: (a) Banks require proper documentations and collateral as security against providing loans. But there are situation where small farmers lack in providing such documentations and collateral and even fail to repay the loan in time due to crop failure. Therefore, the banks would not prefer to lend money to small farmers.
(b) Apart from bank, the small farmers can borrow from local money lenders, agricultural traders, big landlords, cooperatives, SHGs, etc.
(c) Example - Gopal is a small farmer, who borrowed money from a local moneylender at a high interest rate of 3 per cent to grow rice. But the crop was hit by drought resulting in failure. As a result, Gopal had to sell a part of his land to repay the loan.
(d) The small farmers can get cheap credit from the different sources like - Banks, Agricultural Cooperatives, and SHGs.Ques 12: Fill in the blanks:(i) Majority of the credit needs of the __________households are met from informal sources.(ii) __________costs of borrowing increase the debt-burden.(iii) __________issues currency notes on behalf of the Central Government.